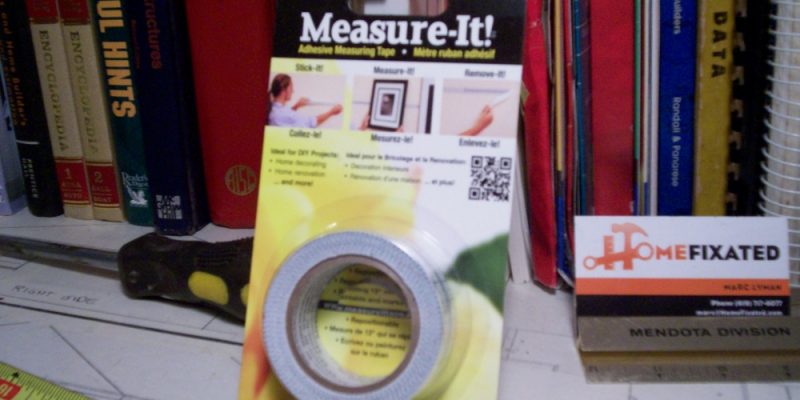 Hanging pictures can be a pain in the butt. Measuring, marking and readjusting – it’s enough to drive a sane man or woman cuckoo. Add in the fact that your significant other is telling you that the last seven thousands times you hung the photo, it just wasn’t good enough – the picture needs to be moved over another 1/8 inch – and you’re on your way to the loony bin. But with a product called Measure It! tape, the adhesive tape measure, you’ll make your picture hanging partner happy and you’ll keep the guys in the white suits away for good, or at least until the next honey-do list comes along.

So, why not just use a regular tape measure to hang photos and other stuff on the wall? Because you wind up making little marks on the wall with a pencil to hang the photos. It’s not too hard to erase them, actually, sometimes it is hard to erase, but it sure is hard to see them when you need them most. That’s where this stick-to-the-wall tape measure comes in handy.

No need to remove a plastic liner from the back of the Measure It tape. Just unwind it from its roll and stick it where ever you need it. And if you need to move it, no problem. It reportedly peels off the walls without doing any damage, and, it can be repositioned without the adhesive wearing off.

What I though was ideal about this sticky tape measure is that it can be wrapped in and around corners unlike a conventional tape measure. It also works surprisingly well on rough surfaces. The walls of my home are heavily textured and this handy little tape stuck to the wall fairly well.

I’ve always been told that the best way to hang a picture or photo is at eye level. Since I’m a little taller than most people, my eyeballs are a little bit higher up the wall than others. So instead of hanging the stuff where it looks good to me, I thought I’d be generous and go with an average eyeball height.

After a little research, I found that most art galleries hang their pictures 57” up the wall from the ground. That means that the bottom of the picture frame should be 57” off of the ground for the picture to be eye level. I thought that was a little bit low for my tastes so I decided to measure my eyeball height, which was 67”. I decided to raise my photos up a little higher since most of the folks who are going to look at these pictures are a little bit taller than average. What can I say, I have lanky friends!

I measured up from the ground on both sides of the wall where the pictures were going so that the Measure It! tape would be nice and level going across the wall once I stretched it out. I double checked for level by measuring from the ceiling down to my tape mark. I rolled out some of the tape and stuck it to the wall on my painter’s tape marks. I didn’t need the whole roll of the stuff (there’s 32’ or 48’ per roll!) so I ripped it off and put the rest away for the next project.

What’s neat about this stuff is that unlike a conventional tape measure, it has a center line on the tape for exceptional accuracy. It also has 16” center marks to help you easily find the studs behind the wall. Once you find a stud in the wall, you can reposition the tape on the wall so that all of the studs line up 16” OC when driving nails or setting screws into studs for those heavy pieces of wall art.

I really like this product because it’s disposable – not that I like throwing stuff away, but I can write on it, nail into it or poke holes through it without worrying about damage. You can’t do that with my 25’ FatMax!

Hanging Out with Measure It Tape

Once the paneling nails I was using to hang the pictures with were all in the right place, I hung the pictures and took a picture. After you’ve test fitted the pictures and you’re sure everything is nice and straight, you can remove the Measure It! from the wall and toss it in the trash. After it was all said and done, the photos were nice and even, level and plumb and perfectly distanced 3” apart, just like a picture hanging pro!

Want some of this great picture hanging stuff for yourself? Take a look at the Measure It! tape website right here and find a retailer near you. Or just head on over to your nearest True Value hardware store and pick up a roll today. It comes in 32’ and 48’ long rolls that retail for $4.99-$5.99 and works excellent for hanging pictures, laying out furniture, drilling guides – not to mention 100’s of other uses as well. Now you can answer “how’s it hanging?” with “easy peasy thanks to Measure It! tape”!