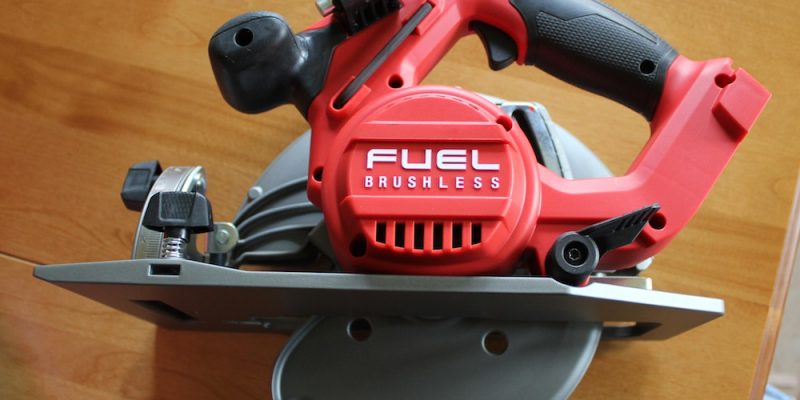 Earlier this year, our fearless leader Marc reviewed the Milwaukee Fuel 6-½” circular saw. After putting it through a James Bond supervillain-inspired workout, he was impressed with the power, features and run time. Many users, though, want the capabilities and convenience of a full-size blade. In response, Milwaukee recently upped the ante, and introduced a new version with a standard 7-1/4” circular blade: the Milwaukee Fuel 7-¼” Circular Saw. We’ll take a look at how it stacks up against the earlier version, and whether it’s a contender to replace your corded saw.

Official Specs from Milwaukee for the 7-1/4″ Circular Saw

The Milwaukee Fuel 7-1/4” Circular Saw we received to evaluate came in a kit, aka 2731-21. Included was the Milwaukee Fuel 7-1/4” Circular Saw (2731-20), a blade and wrench, an M18 RedLithium XC 4.0 Ah Extended Capacity battery pack, a multi-voltage charger capable of charging both M12 and M18 batteries, and a contractor bag. The saw is also available as a bare tool, or in a kit with two batteries, which is a good option for a jobsite saw that will see a lot of action.

I threw the battery on the charger. It was fully charged in less than 30 minutes. Meanwhile, I put the blade on, a quick and easy process. The provided Allen wrench stows securely out of the way in the forward part of the handle. This is the next-best thing to tool-less blade changes – no wasted time searching for the %#*&^%$ wrench. Slide the blade up into place, and snug up the retaining bolt – the spindle lock makes it easy. Grab the battery, slide it into place, and you’re ready to make some sawdust!

The Milwaukee Fuel 7-1/4” saw had the misfortune to arrive just as there was some nasty work to be done on our farmhouse. I’m getting ready to install a new kitchen floor, and wanted to remove the old tile and subfloor first. Actually, it was kind of like an architectural dig. There was a top layer of tile, followed by a layer of ¼” underlayment, followed by a second layer of tile. To speed things up, I decided to cut through all of it, making more manageable sections to pry up. I set the depth, put on a dust mask and safety glasses, and plunged in. The saw easily ripped through all of it, including the occasional nail, although all the gunk from the tile probably wasn’t the best thing for my sporty new blade. Ah well, this is the real world – no mercy!

Among other questionable “improvements,” the previous owners had put down a ¾” particleboard floor in the basement, and had carpeted over it. Needless to say, it was a mildewed, moldy mess. I had pulled out all the carpet, but the particle board was still in place, nailed to ¾” sleepers that had at one time been attached to the concrete floor with adhesive, but which were now mostly just a crumbling mess. Pulling up damp 4X8’ sheets of ¾” particleboard, and hauling them out of the basement, wasn’t a very appealing prospect. The saw’s second unpleasant task would be to cut them into more user-friendly chunks. I headed downstairs, plunged in and cut up the floor in two rooms, roughly 70-80 lineal feet total. The Milwaukee easily made all the cuts, the dust blower did a decent job of keeping the cut line clear – and it was nice not to be tripping over an extension cord.

Now For Some Fresh Air (Don’t Mind The Sawdust)

After finishing the kitchen and the basement, the indicator on the battery (a very handy feature, by the way) still showed 3 out of 4 bars remaining. I wanted to get an idea how many cuts the Milwaukee Fuel 7-1/4” Circular Saw could make on a charge, similar to how I tested the 36V Makita saw recently. I put the battery back on the charger, to top it off, and then, since I had gunked up the blade with tile crud, I put a fresh one on. Unfortunately, my local home improvement store doesn’t stock Milwaukee blades, so the saw got its next dose of abuse – a Dewalt blade. That’s the beauty of using a more common-sized blade – lots of choices available. It was the same type of blade, with 24 carbide-tipped teeth. I grabbed the freshly charged and bladed saw, and headed to the great outdoors to make some sawdust.

In time-honored fashion, I grabbed some salvaged 88” 2X4 studs, set the saw guide to make a one-inch wide crosscut, and fired up the Milwaukee Fuel 7-1/4” saw. The saw cut strongly, and I was quickly finished with the first stud. In the interest of keeping all my digits attached, I quit when there was about 5” left on the 2X4.

Then it was back to work, with another 2X4. Before long, it too had been reduced to 1” chunks of its former self. To mix it up, I grabbed a 4’ piece of 1X3, and ripped it up the center—easy peasy, and then I was off to fetch a third 2X4. I kept steadily cutting, until suddenly the saw just stopped. This is how the REDLINK PLUS technology works; it monitors the battery, and along with preventing overload and optimizing performance, it senses when the battery needs to be recharged, and simply shuts it down. No slowing down – all or nothing.

Time To Ditch The Cord?

When the saw quit, there was 36” left, and it almost made it down to 35”. I didn’t count all the little 1” chunks, but starting with 88” and ending with roughly 5” on the first two boards, I estimate roughly 83 cuts per board, plus about 52 on the third, making approximately 218 cross cuts. I’ll round it down to 210, to account for the blade width (if you’re a math whiz, and want to calculate the exact number, knock yourself out!). That, along with the 4’ long 1X3 I ripped, is a pretty fair bit of cutting for one 18V battery!

The saw was very comfortable to use. The official specs put its weight at 9 pounds, roughly the same or a bit lighter than many corded saws, and about a pound heavier than the 6-½” version. It looks and feels beefy and well made. It’s well balanced, and cuts dead-on down the cut indicator at the front. The blade height and angle adjustments are easy to use, and lock firmly in place. Like the 6-½” model, the bevel markings are engraved, so they won’t disappear over time, and the saw can cut up to a 50° bevel. There’s also an adjustable blade guard that’s easy to install and remove.

Unlike the left-bladed 6-½” Fuel saw, the Milwaukee Fuel 7-1/4” saw has the blade on the right, which Milwaukee says most users prefer. The larger blade on the new saw naturally provides increased cutting depth, 2-½” vs. 2.188”. Those are the two major differences between the 6-1/2″ and 7-1/4″ versions of the M18 Fuel saw. The most important feature on both, though, is the brushless motor. The added power and run time brushless motors are able to extract from the battery is what is helping make cordless tools serious contenders to replace corded models.

The rafter hook is another nice carryover from the 6-½” saw. It lodges securely out of the way when not in use, but it’s easy to swing out, and would be very handy for someone climbing around up among the rafters. That’s one place this saw would shine – for whoever has to slog along, trimming off rafter tails and excess plywood from the roof, not having to deal with an extension cord would be a huge benefit.

Who else is a potential user for the Milwaukee Fuel 7-1/4” Circular Saw? Pretty much anyone who USES a circular saw. Framers, concrete formers, remodelers, serious DIYers, anyone working on a project with limited power and lots of power users, and anyone who hates being tethered to an extension cord. The M18 Fuel 4Ah XC battery is a beast, especially in combination with the Milwaukee’s brushless motor. Being able to make 200+ cuts on a charge will get many crews through the work day, or at least ‘til lunch, when a 30-minute charge will get you a fresh start. For a really busy crew, the two-battery option will keep you cutting all day. If you’re looking to cut the cord, the Milwaukee Fuel 7-1/4” Circular Saw should be high on your list of contenders. 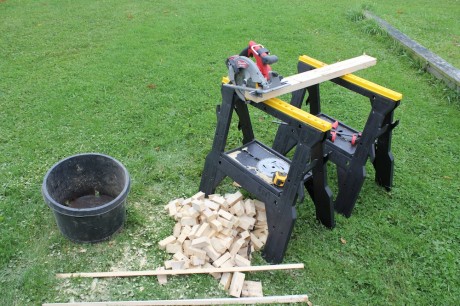 The Milwaukee FUEL 18-Volt Brushless Lithium-Ion 7-1/4 in. Cordless Circular Saw Kit is available from our sponsor Ohio Power Tool for $329.