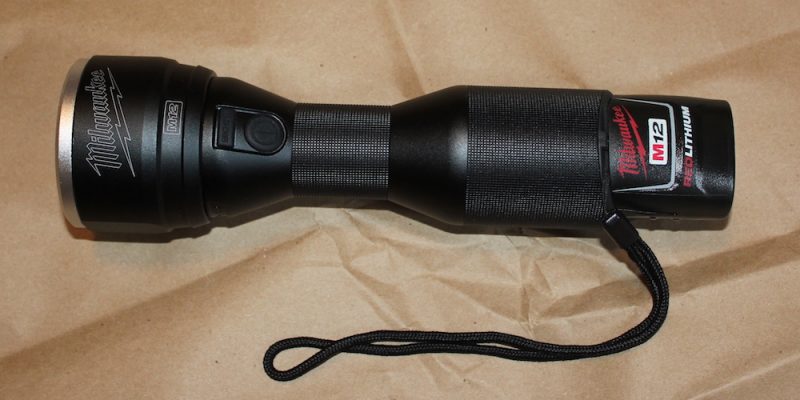 My name is Phil, and I’m a flashaholic. I have well over a dozen flashlights floating around, ranging from little pocket lights that take AAA batteries to big Maglites that feed off of multiple D-cells. They vary in brightness and reliability, and most have trouble withstanding even moderate household use, much less typical job site abuse. We were intrigued when we saw the new Milwaukee LED flashlight at the Milwaukee New Product Symposium (NPS) in June of 2016, and recently they sent us one to evaluate. Read on, and we will enlighten you.

The first thing you notice about the Milwaukee LED flashlight is that it looks like it means business. The light is all black, except for an aluminum trim ring at the front. What, you were expecting red? Maybe the next version…The flashlight body, which is wider at the ends, is very comfortable to hold. The shape, along with the knurled finish, also helps keep the light from slipping out of your hand.

The Milwaukee LED Flashlight was designed to stand up to job site abuse, and has a very robust feel to match its robust looks. The light is made of machined 6000 series aircraft grade aluminum alloy, and its IP54 rating means it is very impervious to dust and dirt – and apparently concrete. During a demonstration at the Milwaukee NPS, the Milwaukee rep dropped a chunk of concrete on the flashlight, as captured in this video from our awesome friends at Charles & Hudson. If I tried this with any of my other flashlights, they’d be in the trash shortly thereafter.

The Milwaukee LED Flashlight can be powered by any Milwaukee M12 battery. The 1.5 Ah and 2.0Ah batteries slide right into the body. The light will also accept the XC (Extended Capacity) batteries, like the 4.0 Ah 48-11-2440. It doesn’t look quite as sleek, but it will run a long time (that’s the battery the run times are based on), and it definitely won’t roll off the table!

Starting this month (August 2016), run time will get even better. That’s when Milwaukee rolls out its new, higher-capacity M12 batteries. The 3.0 Ah compact battery will provide double the runtime of the current 1.5 Ah unit, and a new 6.0 Ah M12 XC battery will extend the run time of the current 4.0 Ah battery by 50%. The batteries will work in any tool on the M12 platform.

It’s apparent there are no dim bulbs on the Milwaukee design team. They obviously spent a lot of time tending to the details on the Milwaukee LED flashlight. As an example, the power button and mode switches are separate. I have several flashlights where you have to “cycle through” the high/low/strobe modes every time the light is turned on and off, and it’s a pain in the butt. When the light is turned off, it remembers and powers back on in the last used mode. The switches on the Milwaukee light are well placed and responsive, and I like being able to turn off the light without simulating a disco strobe. The light can also be illuminated briefly by just partially depressing the power button.

Other touches include a “fuel gauge,” which is a row of four LED lights that illuminate for a few seconds when the light is powered on, to show the battery’s remaining charge. A couple of flat spots on the front of the light help keep it from rolling away when it’s laid flat, and a lanyard attached near the rear is helpful for the fumble-fingered (like me). To switch from flood to spot modes, no twisting is required – simply slide the head forward, and back to return to flood mode. It can be done one-handed.

Light Up The Night

The Milwaukee LED flashlight claims 800 lumens and a range of 375 yards. That’s a lotta light! Our neighbor’s garage is across an alley, roughly 200’ from our back porch. I took the Milwaukee light out after dark and fired it up. I scared the crap out of a couple of kids walking through the alley, and it sure lit up that garage.

To better test the range, I took it along to our farm. The house sits back about 800’ from the road, so around midnight I took a stroll out to the road and fired away. The picture didn’t come out great, but the Milwaukee LED flashlight illuminated the house nicely. It was great for walking the driveway, too, casting an amazingly bright pool of light to stroll by. We have bears in the area, along with numerous other critters, and if the light didn’t scare them away, at least I’d be able to see what was going to eat me.

I See The Light

Don’t get me wrong, I’ve got nothing against Maglite. We keep a couple in the house, and one in each vehicle. They’re pretty durable, and the LED models get good life out of a set of batteries – the Maglite ML300L claims 71 hours! However, that model, which is the brightest LED flashlight Maglite offers, has 694 lumens, is almost 19” long, takes 6 non-rechargeable D-cell batteries, weighs 50 oz., and costs $130 without batteries.

The Milwaukee LED flashlight cranks out 800 lumens, is 9” long, uses a battery that recharges in about than 30 minutes, weighs about 19 oz., and costs $99 without the battery. Unless I’m out to do some head cracking, I’d prefer to tote the Milwaukee.

Hesitant to spend that much because you don’t baby your flashlights? The five-year warranty on the flashlight, and limited lifetime on the LED, should seal the deal. (You still may want to refrain from dropping concrete chunks on it, though…). If you’re already on the M12 platform, the Milwaukee LED flashlight is available as a bare tool. It’s also available in a kit, with a charger and 1.5 Ah battery. 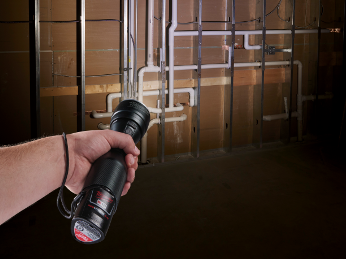 Light things up and buy from our sponsors at Ohio Power Tool for $99: