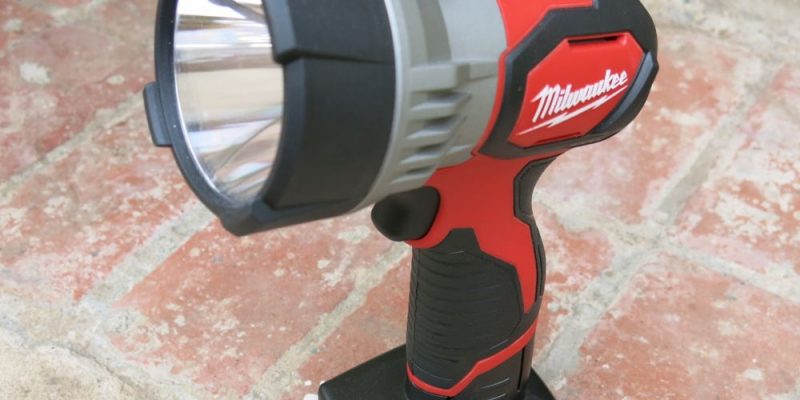 Like most men, I like bright, shiny objects. That is especially true if the bright, shiny object is actually a flashlight. Milwaukee sent us their M12 LED Spotlight several months ago and I have been putting it through its paces. Those paces include; lighting up a couple crawl spaces, providing lighting for some wiring work in an attic, and, the most gruelling testing of all, trick-or-treating. Yes, I was “that dad” that brought along lighting capable of melting childrens’ candy bags through raw lumen power. Whether you’re a pro, or an avid DIY’er / trick-or-treater, you’re probably wondering if you need the Milwaukee M12 LED Spotlight. Spoiler alert, the answer might be yes. Before we get that far along though, let’s talk details and share some hands-on impressions.

In case one brightness isn’t enough for you, the Milwaukee M12 LED spotlight has three different modes. One of them, a strobe feature, I didn’t actually realize existed until I read the documentation. Unlike many multi-mode flashlights, Milwaukee doesn’t make you power the light on and off to find the mode you want. That style of light can be really annoying as you power on and off the light repeatedly to get to what you want. Instead Milwaukee has a trigger on/off and a cleverly-named “mode” button at the back of light. Once you power the light on with the trigger pushing the “mode” button will cycle you between low and high beams. If you hold down the “mode” button, you’ll discover the strobe mode which is great for emergency use or to bust out your freshest moves from Saturday Night Fever. One thing I really like is that the light remembers what mode you used last and defaults to that each time you turn the light back on.

The trigger design on the M12 LED Spotlight is great. Not only is the handle ergonomic (if you’ve held any of the M12 drills, the LED Spot will seem very familiar), but the trigger can either be depressed lightly for momentary brightness or pulled in on the way for constant on (until the trigger is pulled again in the future). Despite the whole rig not exactly being pocket-sized, the head of the tool doesn’t feel particularly heavy. The overall weight depends on whether you use the original m12 batteries, or the larger XC square shaped battery pack. I definitely prefer the XC, both in terms of runtime, but also because you can stand the light up without it toppling over.

Milwaukee also included a fuel gauge on the left side of the light, so you don’t find yourself in the dark holding a tool with a dead battery. And they threw in a wrist strap that attaches through a recessed bar at the back of the light. I promptly installed the wrist strap and then just as promptly uninstalled it. I found it mostly got in the way. However if you’re working overhead or in areas where a dropped light could either bonk someone on the head and/or leave you perilously in the dark on a catwalk, you might find the wrist strap to be very handy. The front housing around the bulb is a nice, hard rubber that has four “feet” that both help protect the bulb, but also make the light more stable if propped on the battery and bulb housing.

How Bright is the Milwaukee M12 LED Spotlight? – Luminous Lumens

The Milwaukee M12 LED Spotlight kicks out a narrowly-focused 750 Lumens in high beam and strobe modes, or 400 Lumens in low beam mode. Both low beam and strobe use about 1/2 the battery power as the high beam mode (4-8 hours according to Milwaukee, with an XC 4.0 battery). Milwaukee also estimates the beam distance as 700 yards. That’s a whopping seven football fields placed end to end. I didn’t walk it out, but based on my testing I don’t doubt it. I was lighting up trees several blocks away with no problem. In fact, the light was so bright I was a little worried someone might freak out and call the police. People freak out for a wide variety of reasons in my neighborhood, and seeing an extremely bright light of unknown origin is well within their wheelhouse. As a result, I experimented with the light and then kept moving. This light is no joke when it comes to projecting a beam far away. And it’s much easier to aim at stuff than using the high beams on your car.

One of my first real world uses was to illuminate a crawl space for some clients during a home inspection (without all of us actually going into the crawl space – that’s what the home inspector get paid the big bucks for). We were in front of a rather spacious crawl space door, and I was able to light up some of the far reaches of the crawl space with the light. Because of its spot focus, I was also able to point a few things out with the center of the beam. This type of use is really where the M12 Spot “shines” – lighting up far away, hard-to-get-to nooks and crannies. It’s great for home inspectors, or pro’s that need to inspect dark buildings or big unlit and hard to reach areas.

When I used the Milwaukee M12 LED Spotlight in an attic while working on some wiring, the light was intense enough to actually provide some general space lighting too. Although I was able to work from the light it kicked off (I found the lower setting preferred for this kind of usage), there are much better area work lights made by Milwaukee that you don’t need to worry about knocking over, and that put out more consistent light for working rather than inspecting.

Lastly, using it on Halloween was a bit like having a sword fight where one person gets a light sabre and the other gets one of those little plastic swords you use to skewer olives with in your martini. Definitely overkill. The light was so bright, avoiding blinding people became the main imperative. Followed closely by “don’t melt anyone’s candy.” But when it came to the long walk home, the Milwaukee M12 was able to light our way down the entire street, multiple blocks at a time. Plus it made some seriously spooky shadows.

What the Milwaukee M12 LED Spotlight Doesn’t Have

If you have played around with various worklights and flashlights, there are a couple things you might expect the M12 Spotlight to have. One of those is an articulating head. Many lights that double as work lights let you angle and aim the bulb assembly. With the M12 LED Spot, what you see is what you get. Whatever you aim that thing at, that’s what is going to light up. Another thing you won’t find is an adjustable focus. The beam pattern has an intensely bright bullseye in the center, a slightly dimmer ring around that, and then a much dimmer broader ring around that. It’s not an even light distribution, nor is it intended to be. If you’re looking for a work light with broad, even lighting, Milwaukee makes a bunch of those in various form factors much better suited to the task than the M12 Spot. 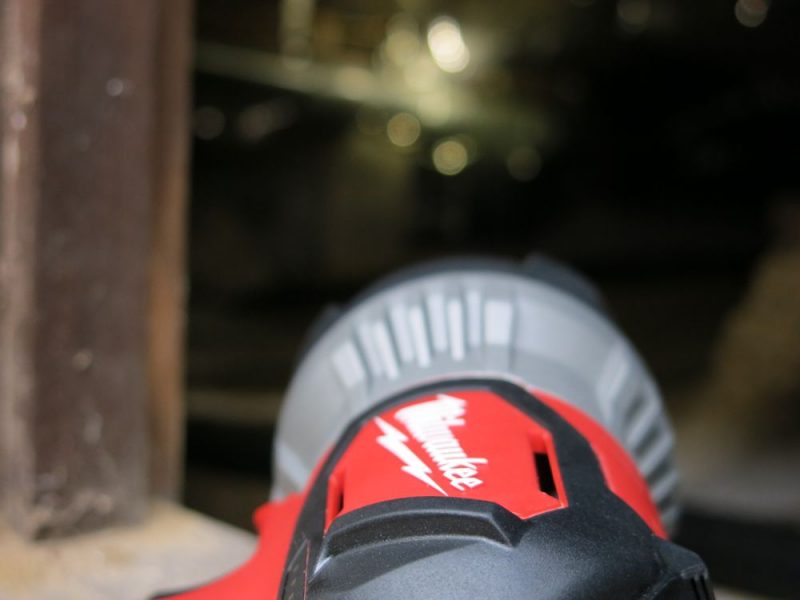 Conclusion, Pricing and Where to Buy

If you’re looking for an even, stable area light or work light, check out some of Milwaukee’s other great lighting options. However, if you need to access distant, dark corners with the light of day, or you are hoping to signal aliens from the comfort of earth, the Milwaukee M12 LED Spot Light does a great gob of focusing a bright beam where you need it. Even if where you need it is hundreds of feet away. It’s also very adept at lighting distant objects most other flashlights would have a very hard time reaching with their more diffuse lighting. You can find the Milwaukee M12 for around $69 at the Home Depot (tool only).