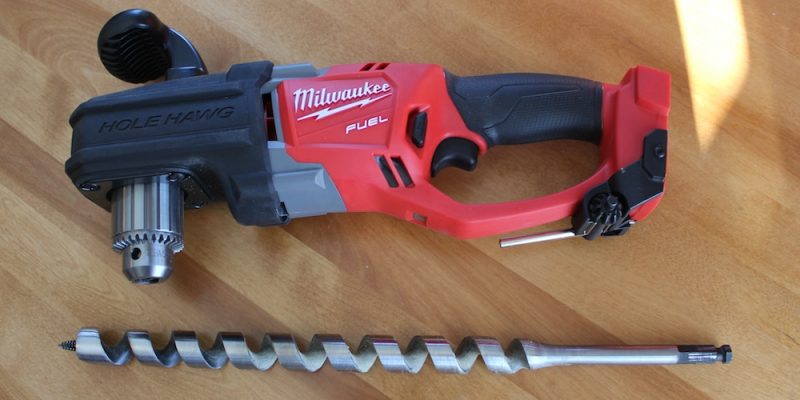 For the average DIYer or tradesperson, a good-quality 12V or 18V drill driver will do pretty much anything you need. Drilling holes, driving fasteners, or using a paddle attachment for mixing margaritas are only a few uses for this versatile tool. If you’re a plumber or electrician, though, doing rough-in on new construction, you need something way beefier. For decades, the go-to drill has been the Milwaukee Hole Hawg. With a motor approximately twice as powerful as the one in my wife’s Subaru, the Hole Hawg can drill through pretty much anything, all day, every day. Assuming you have somewhere to plug it in, that is. Recently, Milwaukee solved the “no power” problem with their new battery powered Milwaukee M18 FUEL Hole Hawg. They sent us one of these new cordless beasts to evaluate; brace yourself, and we’ll take a look.

According to the manufacturer, the Milwaukee M18 FUEL Hole Hawg 1/2″ Right Angle Drill drills faster than the original corded HOLE HAWG, delivers over 150 7/8″ holes per charge, and is over 30% lighter weight than its corded predecessor. It’s designed for drilling with auger bits up to 1-1/4″, self-feed bits up to 2″, and hole saws up to 4”. The drill uses Milwaukee’s POWERSTATE brushless motor, which they claim delivers better performance than corded drills, especially under heavy load. Check out this quick promo video from Milwaukee:

In The Red Hawg Box

The drill I received to evaluate came as a bare tool. The Milwaukee M18 FUEL Hole Hawg, model 2707-20, comes with the drill, a chuck key, and an owner’s manual. The drill is also available in kit form, as model 2707-22. The kit adds two 4.0Ah XC batteries, a multi-voltage charger, and a contractor’s bag to schlep it all around in.

This drill is a beefy bugger. It looks and feels like a quality tool, from the big D-handle to the tip of the all-steel chuck. The Milwaukee M18 Fuel Hole Hawg is easy to get a good grip on. The main handle has plenty of room to grab, a comfortable rubber overmold, and an easy to use variable-speed trigger. There’s a knob curving out of the top of the front, for your support hand. Unlike the secondary handles you can screw onto other drills, this is one you’ll be using all the time. First off, this sucker is heavy, and unless you resemble Dwayne “The Rock” Johnson, you pretty much need two hands to hold it in place and control it.

Also, it’s only a matter of time before the bit binds partway through a hole. Several things, including hitting a nail or a super-hard knot, could cause this. When this happens, the bit will stop, but the extremely torquey drill will be harder to stop than Liam Neeson going after his kidnapped daughter, after she’s been TAKEN! for the umpteenth time. If the drill isn’t braced against something, it will rotate abruptly, taking your arms along for the ride, until it smacks into something solid enough to stop it.

If your arm, fingers, or whatever are in the way when this happens, you will likely incur some bodily harm, up to and including a broken wrist or smashed fingers. The Milwaukee manual has a couple of illustrated examples of how you can avoid this unpleasant experience, along with some suggested expletives to utter in case they don’t work. (Just kidding about the expletives. If you need some, though, just contact me; I have numerous creative and colorful phrases available, inspired by many years of painful and/or frustrating experiences).

At nine pounds, the Milwaukee M18 Fuel Hole Hawg is not a light drill. If the weight bothers you, though, you’re missing the point. This drill is made to power through studs and beams all day, every day, and anything beefy enough to be able to do that is going to have some heft to it. The original corded Hole Hawg comes in various incarnations. They all tip the scales at 11-½ pounds or better, though, so this baby is slim and trim by comparison. By the way: the Hole Hawg, Super Hawg, and Big Hawg (hole saws) are some of the most kick-ass tool names going!

The farmhouse renovation I’m currently working on involves a lot of changes to the wiring and plumbing. There are several areas where I have to run wires and plumbing through thick, old, hard beams, then through the bottom plate and into the wall. About a month ago, I actually burned out a ½” corded drill trying to drill a 7/8” hole through one of these *&*^%$*&%! beams. Needless to say, many foul words were muttered, and I ended up renting a corded Hole Hawg to finish the job.

When the Milwaukee M18 FUEL Hole Hawg arrived, I was just getting ready to drill more holes, to run some ½” copper pipe. These pipes had to come up inside two walls; one wall was built atop a solid 8” beam, the other above a 10” beam. The holes also had to go through the floor and wall plate. This mission was a bit beyond what the drill is intended for; on a normal rough-in, you’re drilling through 2X4’s, usually with a 7/8” bit. Often they’re doubled or tripled up, but it’s still usually newer, relatively soft wood. These beams were installed around the time of the Civil War, and had spent the following 150 years or so fortifying themselves so they could destroy my drill. But I figured, what the heck – let’s see if this bad boy can handle it!

I chucked up my 17” long, 1” diameter ship augur bit. The chuck key has its own little nesting spot on the rear of the handle. It fits snugly in place, so as long as you tuck it in properly, it will be there next time you need it. I set the tip of the bit on the top plate of the wall above the 10” beam, chanted “Drill, baby drill!”, and pulled the trigger. The Milwaukee M18 Fuel Hole Hawg powered steadily through about the first 5-6”, then bogged down for a moment and quit. Like I said, this was some tough old wood. What made it quit was the REDLINK PLUS technology in action. When it senses that the drill has encountered an immovable object, it shuts down the drill before it damages the motor. Wish my corded drill had it.

After waiting a few seconds, I reversed the direction and backed the drill bit out, then resumed. I drilled in about another inch, then pulled the bit out, still spinning, to clear the shavings. I dug back in, and kept repeating the process, until the drill broke through the bottom of the beam. One down! Moving a few inches over, I began hole number two. Having learned the necessity of keeping the hole cleared, I did so all the way through, and had the second hole finished in about a minute and a half. I took a five-minute break, then moved over to the other wall, assumed the position, and powered on. Again, the drill bogged down and stopped twice, but a few minutes later, mission accomplished!

Since I still had the big bit chucked up, and two bars left on the battery power monitor, I decided to head down to the basement and clear another task off the punch list. The front wall of our dining room has no outlets at all, and my spouse has been patiently waiting for some to appear. Using the long bit, I was able to angle in under the bottom plate of the front wall. I picked two spots, and drilled up into the wall cavity.

The built-in LED light actually came in handy here, casting light into the depths of the joist bay. No beams were involved here, and the Milwaukee M18 FUEL Hole Hawg burrowed quickly through the floor and bottom plate of the wall. After that, I just used my oscillating multitool to cut out holes for a couple of old-work boxes, fed the Romex up through the wall, and wired up the new outlets. Taming antique beams and preserving marital harmony – not a bad day’s work for a cordless drill!


The workout I gave the Milwaukee M18 Fuel Hole Hawg was well beyond what it was designed for. I was skeptical the drill would be able to get through the beams, but it showed me what Hawg Power could do. Would you do it on a daily basis? Nope, but it’s great to know that it can kick hard wood ass in a pinch.

The Milwaukee M18 Fuel Hole Hawg I got has the old-school chuck, the type that takes a chuck key. This version is good for someone with a big stockpile of long, expensive drill bits, or anyone looking for maximum versatility. For anyone doing production work, the version with the quick-change feature (Model 2708) is a better bet, as you can swap out bits a HOLE lot faster. Sorry. The only downside to this system is that you can only use bits with a 7/16” shank. If you’re an electrician, which is Milwaukee’s target market for this drill, that’s probably about all you use, anyway.

If you are an electrician, a serial renovator, or anyone who frequently drills a LOT of holes in framing lumber, take a serious look at the Milwaukee M18 FUEL Hole Hawg. The ability to get to work without having to fire up a generator (and fight for a spot on the power strip), or to work in tight spaces without wrestling with a power cord, make this drill a big time (and aggravation) saver. It has loads of torque, goes a long time between battery changes, and its lighter weight is something you’ll appreciate, especially toward the end of a long day of making holes and pulling Romex. The folks at Milwaukee stand solidly behind the Milwaukee M18 FUEL Hole Hawg; it comes with a five-year warranty on the tool, and a three-year warranty on the battery. If you have heavy-duty drilling to do, add a Hawg to YOUR pen! Available (bare tool) for just $250 from our Sponsor Ohio Power Tool. 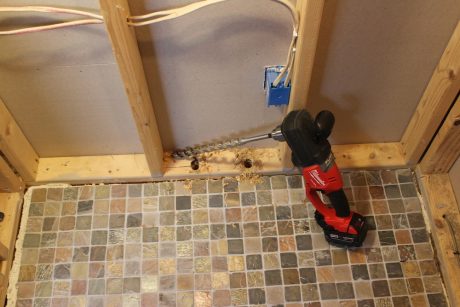