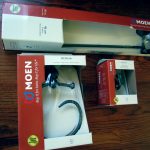 Towel bars are totally overrated, right? Not according to my wife, who was very happy to hear Moen was sending us a medley of their bath accessories to review. Among that medley were a towel bar, a towel ring, and a hook for both their Sienna and Brantford line of bath accessories. It’s a bit of a long story, but our old bath hardware was a casualty of multiple lead abatement, painting, and stain/finish projects. The truth of it is, the old hardware went away because it was really ugly, and really flimsy. You know those towel bars that fall down if you just look at them funny? Anyway, you get the idea. Unfortunately for my wife, I sometimes remove/demolish hardware, doors, load-bearing walls, etc. before I actually have replacements lined up. Towel bars fell into this category. In a future HF article, you’ll even get to read about how to make an improvised towel hangar from an unsightly hole in your bath tile. However, improvised towel-hanging just didn’t cut it in this household.

Both the Sienna and Brantford are stylish looking product lines, each with some pros and cons. As you’d expect with hardware from Moen, they both come complete with hardware and installation instructions in case you’re inclined to read that kind of thing. I’ll cover the basics by product line. 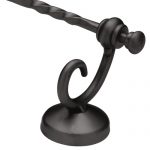 I’m a sucker for wrought iron, and the look of the Sienna nicely balances the heft and coldness of iron with a graceful curvy design to soften the look. It works great in our Spanish style home, but if you’re living in a Miami Vice style ultra modern metro loft, then the Sienna line probably isn’t for you. However, if you’re a fan of the wrought iron look, then the Sienna has numerous very stylish bath accessory options.

Side rant: have you every looked for wrought iron on Craigslist? It turns out half of craigslist users think it’s “rod iron.” People, it’s WROUGHT IRON! Thanks, I feel better now. Anyway, the Sienna line is solid, and it includes metal mounting brackets. Metal brackets make me happy because they provide a really solid mounting point. More on metal vs plastic later.

The Sienna line uses a subtle black set screw to secure the bracket to the actual accessory. After installing the towel rack, towel ring and hook, I find the hardware feels very secure and well anchored. Of course a lot of that has to do with how you install the brackets (eg. into a stud vs drywall only). You never know who is going to try to do pull-ups on the towel bar, so I try to install into solid wood or studs whenever possible. 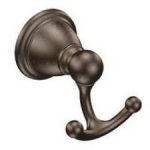 If you’re not into wrought iron, Moen has you covered with the Brantford line. Brantford bath accessories come in oil rubbed bronze, chrome and brushed nickel, with Chrome being the least expensive finish option. The styling is neutral enough that you could comfortably use these in a variety of home and bathroom styles.

Unlike the Sienna line, the Brantford line uses plastic hardware. Don’t get me wrong, the plastic seems strong and durable, but I’m biased towards metal. If you’re mounting onto drywall rather than a stud, Moen conveniently included a wall anchor that’s already attached to the plastic mounting post. If you wind up mounting to a stud, you can easily remove the wall anchor and replace it with one or two screws (which is what I did on two out of the three installations). The mounting post conveniently include a couple sharp “fins” that are useful in keeping the hardware from pivoting if you’re installing on something soft like drywall. If you’re installing on something hard such as actual plaster you can pop the pins out so they’re not in the way.

The actual hardware basically goes over the plastic post and locks in place with a small tab that clicks into a hole at the bottom of the hardware stem. I’m not crazy about this system since I’m not convinced the small plastic tab will survive long-term. On the Brantford hook, the plastic stem was also light grey (which made the plastic tab quite noticeable at the bottom of the dark finish hardware). The others we’re black, so I may have just gotten the wrong mounting post color for the Oil Rubbed Bronze finish we had. I’ll probably “paint” the grey tab with a black marker to make it blend in (which can be a very handy tip by the way). Once mounted, the hardware was pretty solid, however the plastic mount makes for a less secure feel than the metal mounts of the Sienna, especially if you’re just using the single drywall anchor.

The metal of the actual hardware on the Brantford is understandably less solid feeling when compared to the solid iron feel of the Sienna line. If you’re looking for a solid metal feel, then Sienna is your better bet if the style works for you.

When I went to look at pricing I was surprised to find that in some finishes, the Brantford is actually more expensive than the Sienna line. I actually expected the opposite to be true. . . the Sienna accessories just look and feel more solid and durable than the Brantford.

So, if you’ve made the mistake of premature bath accessory removal, or if you’ve got lame hardware from the 60’s that falls off the wall at any excuse, consider Moen’s bath accessories as a more stylish and usable alternative. It’s much easier than trying to convince your significant other how great your improvised bath hardware solutions are. Trust me.

starting at $11 (robe hook) and going up to about $44 (a glass and iron shelf) at Amazon. The Moen Brantford

line starts at $9 and even offers faucets in the same style.