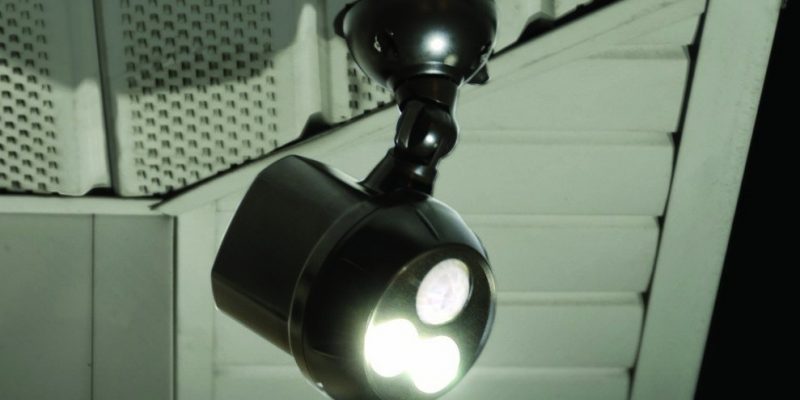 The area by our shed is dark and scary at night. Very little light from the side and back porches reaches it, and I never got around to installing a light there. Normally, it’s not a big problem; we don’t hang around much by the shed at night. Off to the side of the shed, though, is where our garbage cans reside. They don’t really care whether it’s dark or light, either. Frequently, though, I forget to take them out until midnight on garbage-day eve. When this happens, I mutter some special darkness-and-garbage-related curses, make a lot of noise to (hopefully) scare away the raccoons, and stumble around in the dark, dragging garbage cans up the driveway. Recently, though, potential salvation arrived at HomeFixated HQ, when the folks at Mr. Beams provided us with their Mr. Beams MB390 Wireless LED Spotlight to evaluate. And just in time for garbage-day eve!

The Mr. Beams MB390 is a weatherproof LED spotlight. Operated by four D-cell batteries (not included), it cranks out 300 lumens—enough to light up about 400 square feet. The light is triggered by a motion sensor, and remains on for about 20 seconds after motion is last detected. It’s simple to install, and comes with everything you need to mount it—basically, three screws and plastic anchors (hey, I said it was simple!). Perhaps best of all, it has kind of an alien robot head vibe going—that alone might scare off the raccoons (and the potential evil-doers).

I decided to mount the Mr. Beams MB390 right over the shed door. This would illuminate the area where the garbage cans are kept, along with the first 20 feet or so of the driveway, which would get me in range of the side porch light. It would also serve as a deterrent to any would-be thieves who might be thinking of breaking into my shed, to steal my 12-year-old lawnmower or my broken leaf rake.

It only took a few minutes to install the Mr. Beams MB390. The first step was to install the batteries. Just twist off the outer housing, and snap out the battery cover. Drop in the four D-cells, snap the cover back on, and twist the housing back into position. Just make sure you give it a good manly (or womanly) twist at the end, so the arrows are properly lined up; that’s what makes the housing weatherproof.

Next, choose your mounting location, and install the mounting bracket. Unscrew the small thumbscrew on the mounting bracket, and slide the bracket off the light. If you’re installing into drywall, drill a hole for the plastic anchors; if not, drill some pilot holes. Hold the base up, and run your three screws in. A screwdriver works fine; my drill driver works faster.

You can adjust where your Mr. Beams MB390 will shine its dazzling LED brightness in two ways. The big thumbscrew on the stem adjusts the up and down aim. You can also aim it to one side or the other by cocking it in that direction before sliding the light back into the splines in the mounting bracket. Once you have it lined up where you want, just tighten the thumbscrews, and you’re done! Total time for my installation was about ten minutes.

For those of you who are more visually oriented, here’s the official Mr. Beams MB390 Installation Video:

This Is Only A Test

Once I had the light up, I walked around and waved my arms, to see if the light would come on; it didn’t. This was good, since it isn’t supposed to come on until it’s dark out. The neighbors gave me a bit of a strange look, though… I went out later, when it was dusk, and when I got within about 20’ of the shed, on came the light. I went out again, when it was fully dark (my normal trash-moving time). The Mr. Beams MB390 came on when I was over 20’ from the shed, and cast a nice wide and bright circle of light for me to fetch my trash.

Next, I played around with it a bit. I moved out of its range, and waited for the light to go out; it took about 22 seconds. This was pretty consistent throughout my testing. I approached and triggered it again, and kept moving every few seconds, for about two minutes. The light stayed on until I moved away, then again went out after about 22 seconds. I approached from the side, and the motion sensor appears to have a very wide field of view; it detected me when I was way off to the side. The official specs say the Mr. Beams MB390 has a 160° detection range; sounds about right to me. Since the neighbors were watching through the window and looking nervous, I decided to conclude my testing.

Where You Gonna Put That Mr. Beams MB390?

For anyone with a dark side to illuminate, the Mr. Beams MB390 is a quick, easy and inexpensive way to light it up. For crime deterrence, or just to make it easier to take out your trash, it’s a simple way to light up your porch, doorway, deck, garage, storage space, or anywhere else you need to shed a little light. I’m going to mount another one on the side of my shed, so when I’m grilling after dark (a frequent winter activity), I’ll be able to see what I’m charring. With an estimated bulb life of 50,000 hours, I should be able to move a lot of garbage, and burn a lot of meat.

I’m impressed with the Mr. Beams MB390; it’s a decent product at a reasonable price, it’s simple to install, and it does what it’s supposed to do. I’m buying two more of these for my daughter’s apartment in Philly. She lives on the second floor, and incredibly, there is no illumination in the entry hallway or on the stairs. (“Code? We don’t need no stinkin’ code!”). Her landlord has declined to install a light, and there is no convenient source of power to tap into; these two factors may be related. Enter the over-protective father (the alarm system is already in)… I’ll mount one near the bottom, and one partway up the stairs. This should make their ascents and descents less likely to end in disaster.

Like everything else on the planet, the Mr. Beams MB390 spotlight is available from Amazon for around $29. It has over 500 reviews, with the vast majority ranking it at 4 or 5 stars. Get one via the link below, and shed some light on your next garbage-toting or grilling experience.