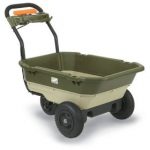 When someone first mentioned the Neuton Garden Cart to me, an electric self-propelled wheelbarrow, I have to admit that a full-fledged fantasy popped into my head. As a person whose childhood was filled with Disney movies and whose adulthood has been a quest to find the laziest route possible, I imagined this garden cart magically working on its own, Fantasia-style (the Mickey Mouse one, not the American Idol one).

In this daydream, the Neuton Garden Cart filled itself with weeds, merrily wheeled itself across the yard and then dumped its contents into an awaiting dancing garbage bag – all while I sipped Mojitos in a nearby lawn chair. Then the harsh reality of a Google search brought me back to earth.

It’s not fair to the Neuton Garden Cart to receive my disappointment for not being Disney-esque. The truth is, it does make gardening and landscaping work much easier for people. Here’s a closer, reality-based look at this motorized wheelbarrow:

The Neuton Garden Cart is brought to you by the same folks that make the Neuton Mower, for those of you tool lazy to human-power your push mower.   The Neuton 22721 12-Volt 2-Speed Self-Propelled Battery Powered Electric 5-Cubic Foot Garden Cart With 200-Pound Capacity

is available at Amazon for $329 and has been met with great reviews. Additional accessories, like a cover or a leaf catcher (great for increasing capacity) are also available.