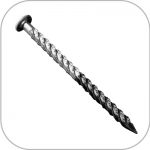 This year’s Internation Builders’ Show saw its share of new product announcements, including several from Paslode. In addition to celebrating 25 years of cordless nailers (who knew cordless nailers have been around that long?), Paslode announced a new self-sealing furring nail, engineered lumber nails, and finally, their new TetraGrip sublfoor nails. If you work with traditional stucco, engineered lumber or just hate squeaky floors, you’ll definitely want the details. 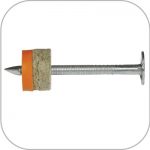 About a year ago I watched a crew prep an exterior for a stucco job. After a marathon of them nailing chicken wire over tar paper, I found myself wondering two things: 1) Since stucco is generally permeable and the tar paper is what actually keeps out the moisture, doesn’t it seem like a bad idea to pepper the tar paper with nails? 2) After watching the stucco crew caulk a large number of the nails, I had to question the efficiency and efficacy of what seemed like a pretty haphazard caulking job to address some of the nail entry points.

Apparently someone at Paslode had a similar experience and came up with the self-sealing furring nail idea:

[The Paslode Self-Sealing Furring Nail] features a flexible, orange-colored rubber washer, which, when driven into the wall stud to secure the wire lath, compresses to provide a watertight seal. The seal reduces the need for caulking and the bright colored washer speeds up necessary inspections. This nail also has a large anti-slip head. The size and unique design on the nail head greatly reduces hammer slippage and unnecessary tears in the weather resistive tar paper.

The new Paslode Self-Sealing Furring Nail seems like a great idea, and I’m guessing will be well-received by stucco contractors (and homeowners concerned by thousands of nail perforations making their tar paper into Swiss cheese). 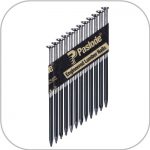 Paslode Engineered Lumber Nails drive flush the first time, maximizing a contractor’s profitability by saving labor time and reducing wasted nails. No more fixing or pulling nails that don’t drive flush. Plus contractors can run their compressor at a lower pressure, reducing fuel and maintenance costs. Paslode Engineered Lumber Nails are compatible with all Paslode cordless and pneumatic framing nailers and are a perfect compliment to the Paslode PowerFramer™ PF350 pneumatic framing nailer, making the tool and nails one of the most powerful, productive fastening systems on the market today.

Or you could also use them with the Paslode PF325 framing nailer we reviewed in February of last year. Learn more about Paslode’s new Engineered Lumber Nail here. 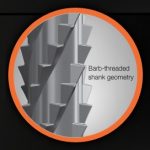 If you followed our racy coverage of the STAFDA trade show last year, you might remember an article we did on UFO’s Ballistic NailScrews. It seems Paslode is onto a similar concept with TetraGrip. The standout difference between the two products is that UFO’s Ballistic NailScrews are designed to be unscrewed if needed, whereas the TetraGrip has a more conventional nail head. One look at the teeth on the TetraGrip though, and it’s clear these nails are design to go in and stay in. Let’s have a moment of pity for any demolition crew that eventually comes in and tries to rip out a subfloor installed with TetraGrips.

In essence, the TetraGrip™ Subfloor Fastening System offers the best of both worlds: the holding power of a 2” floor screw combined with the installation speed of a nail. Subfloor installation suddenly becomes a one-step fastening process. No more gluing or switching between nails and screws, or coming back later to finish the job. You put down the panels, you fasten them immediately and you’re done. Builders have the peace of mind of knowing that this fastener will hold in place and will not induce squeaks, meaning greater homeowner satisfaction and fewer call backs.

What’s the downside to the TetraGrip? If you happen to be in the demographic of homeowners who have teenage children, you may no longer be able to rely on the telltale floor squeaks as your spawn attempts to sneak out of the house at night. TetraGrip is also not recommended for action movie scenes where the bad guy trys to sneak up on the good guy but is given away at the last second by a floor squeak. Sneaky teenagers and action movie sets aside, we think TetraGrip sounds like a great idea for efficiently installed and quiet subfloors.