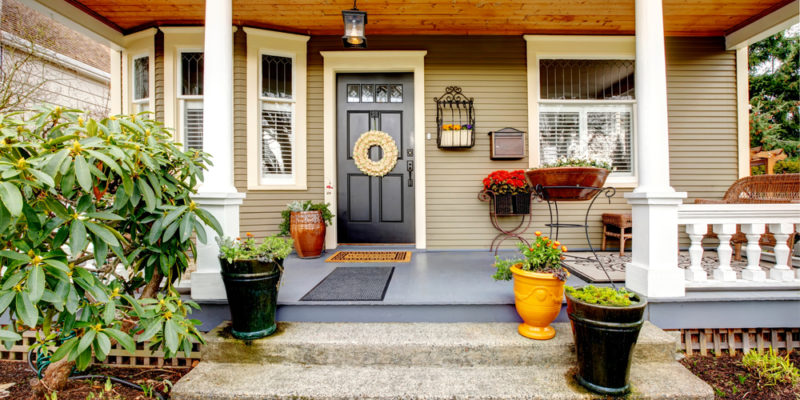 I recently noticed that my hardy hibiscus was rapidly outgrowing its container. Like most gardeners, I find keeping my plants in adequately large planters can be a difficult endeavor. You finally think they’re all secure for the season and then one has a random growth spurt. As it turns out, the local garden center had a sale on neon blue plastic containers. I bought two, thinking to use the other for something else. But then inspiration struck. I could set matching containers at either side of my entryway for extra pizzazz. Sort of like a plant version of double mint gum. If you’d like to do the same in your front yard, read on for details for your own porch planters.

Crucial Supplies for Your Porch Planters

Two Matching Planters
Get something that’s fairly durable and works well for your existing environment. You probably don’t want to use terra cotta anywhere with cold winters or dark-tinted planters anywhere that the heat is going to already be a problem in the summer. It’s a good idea to get a design that will blend in well with your current front porch set up, especially if you’ve got a family member who worries about stuff like that. Since my yard’s current color scheme is basically what would happen if you turned a kid loose with neon crayons (the garden) on bluish beige paper (the house), it’s pretty hard to mess up.

Similar Plants
If you plan on using a mix of different plant species in your planters, you’ll also want to be sure they have similar water and light requirements before mixing them together. Keep in mind the growing conditions on your front porch or stoop as well when you go to pick out plants for this set up. I started off with a hardy hibiscus. It’s a low-maintenance, sun tolerant perennial that’s native to my area.  It can stay outside all winter without having to be brought indoors. I’d moved it to the front porch when I ran out of space in my side yard. It did well. However, someone living further north seeking an unfussy plant might need to look at other species.

Potting Soil
Remember potting soil – NOT gardening soil! I say this every time because some people don’t realize there’s a difference. All they see is the cheaper prices. This can end badly for your plants because garden soil tends to clump up and smother the roots if its put into pots by itself. The additional stuff that potting soil contains is why it cost extra and it’s worth paying for. (I don’t say that often, so pay attention.) I used about 3 bags.

Dolly
Large planters can become very heavy. If you aren’t a ripped guy or you have ailments that don’t enable you to move things around easily, dollies can be a godsend. I got one for Christmas and it’s probably one of the most useful gifts I’ve ever gotten.

Hole Making Device
This could be a drill, an ice pick, or even a hammer and nail if you’re working with thin plastic pots. You need something that can be used to punch a hole in the container of your choice. Just be careful!

Butter Knife or Heavy-Duty Scissors
You may need either of these to set your plants free from their old containers. Butter knives can be run around the inside rim of terra cotta or plastic pots to loosen up your plants. Scissors obviously work better for containers that you plan on throwing away anyhow or those annoying little plastic rings that have been around all the herbs and vegetable plants lately.

Fertilizer
Organic, chemical, pellet, liquid, whatever floats your boat. Just read the instructions before applying because you don’t want to cook your new plants with too much fertilizer.

Mulch
I rarely use this because there aren’t many options where I live that aren’t either pricey (river pebbles) or hideous (dyed wood chips). However, I have occasionally used triple-washed playground sand to improve the drainage in containers of Mediterranean herbs like rosemary and lavender. So your mileage may vary here.

Buying less expensive containers could reduce this cost of this project down to around $35. It would be still cheaper if you only used plants that you already have on hand and replaced some of the potting soil with homemade compost. However, buying a lot of little plants or pricey potting soil could easily end up causing the cost to rise significantly.

In any case, don’t set the planters right under the eaves of the house. During heavy summer downpours, you could easily end up with plants that were drowned or killed by the force of the water coming off the roof. On the other hand, if you plan on keeping them under the porch roof, don’t forget to water them regularly or they’ll end up just as dead.