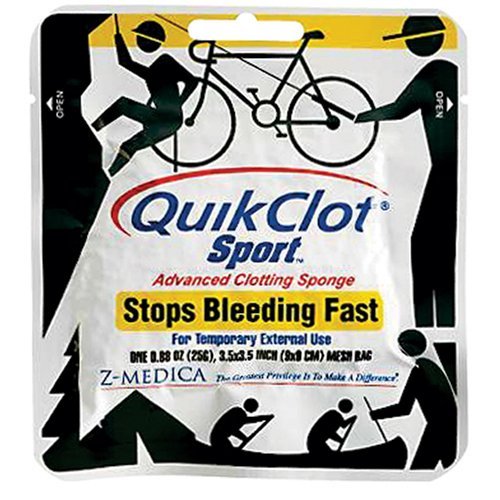 While the Internet is abuzz with rants about SawStop saw safety tech being mandated in the US, the sad reality is that injuries can and will continue to happen regardless of laws and safety technology. So long as there are chisels, knives and saws, there’s always the potential for injury. Just about all of us have experienced a cut at one time or another, and with any luck, that cut was a reminder of following best practices for safety and not, as my good friend likes to describe it, a “copay incident.” But what if a brief mental lapse turns into a cut that’s bleeding more than you’d prefer? That’s where QuikClot can step in and potentially save more than just the day.

QuikClot is essentially a small bandage that when applied to a bleeding wound, helps to control bleeding much faster than pressure alone would. Although I haven’t managed to sever my femoral artery and then rescue myself with QuikClot, we feel pretty confident in suggesting it as an addition to your first aid kit(s). First, there are some pretty impressive clinically proven results. Then, all the major US armed forces deployed it. And, for the Pièce de résistance, Dr. Sanjay Gupta from CNN said (after being embedded with a group of marines in 2003, “Every major conflict throughout history produces a medical miracle. This conflict’s miracle is QuikClot.” Sure, he’s not Anderson Cooper, but he is (I think) a real doctor.

I also took the extraordinary measure of due diligence watching a pretty graphic video of military testing of Quikclot on a live pig (apparently dead pigs don’t bleed very actively). I contemplated embedding the video here, but I was pretty sure the HomeFixated HQ would promptly be fire=bombed by PETA activists. Plus, the video isn’t exactly aesthetically pleasing. Despite its graphic nature, the video is compelling. So, if you don’t mind more blood than than a half dozen horror flicks, and the slicing of a pig for something other than bacon, you can check out the video here. Don’t say I didn’t warn you though, OK?

Some folks also note concerns about QuikClot being exothermic (in other words, it generates heat). It seems some of the earlier military formulations could get hot enough to cause skins burns. That’s presumably still better than bleeding to death, but it’s important to note the new formulation of QuikClot is not known for causing any burns or skin damage. All QuikClot consumer products are made with a natural mineral called zeolite, we’re guessing it’s a loose cousin of Kryptonite. According to Wikipedia, “Zeolites are widely used in industry for water purification, as catalysts, for the preparation of advanced materials and in nuclear reprocessing. They are used to extract nitrogen from air to increase oxygen content or both industrial and medical purposes. Their biggest use is in the production of laundry detergents. They are also used in medicine and in agriculture.” While Zeolite is used in nuclear reprocessing (and doing your laundry), it doesn’t appear to have much of a reputation for toxicity. Reassuring news for anyone sticking QuikClot on an open wound.

Here’s a news post describing QuikClot prior to their consumer version release:

The QuikClot product is very favorably reviewed on Amazon, where it currently enjoys 4+ stars with over 40 reviews. Amazon also offers a competing product called CELOX

, however, we liked the fact that QuikClot wasn’t a powder you poured into the wound (which then later has to be cleaned out). Reading the reviews on Amazon was a bit traumatic in itself. While there are lots of compelling stories of people having successfully used the product, there are also some stories that made me cringe. They typically went something like:

“One day I was juggling razor-sharp machetes when one sliced open my forearm, severing an artery. I thought about filling the wound with whipped cream and Cheez Whiz before duct taping it and hoping for the best, but then remembered I had QuikClot! I applied it with great success, and then pulled it off after a few weeks of bathing in sewage. Looks like the 5 inch long 2 inch deep gash healed pretty well.” (Note, that’s our “artist’s rendition”, not an actual quote). For god’s sake people, if you suffer any sort of significant wound, please seek out prompt medical treatment, regardless of whether QuikClot saved your life of not! It’s great, potentially live-saving first aid, but it’s not a replacement for a doctor, or stitches.

If you’re looking for essential first aid for when something hits the fan (or saw blade), take a close look at the QuikClot product line. QuikClot comes in 3 versions:

($25 – Designed with ionic silver to reduce chance of infection, best for use when medical care is not immediately available).
Quikclot Sport

(Starting at just $15, it’s the same design as the Silver, only minus the ionic Silver)
PetClot

($18, Yup, you might even be able to save Fido’s life. Probably most suited for hunters, back-country hikers, law enforcement canine units, and overprotective pet owners).

We hope you never have the need for it, but if you have used or wind up using QuikClot, please let us know about it in the comments below.