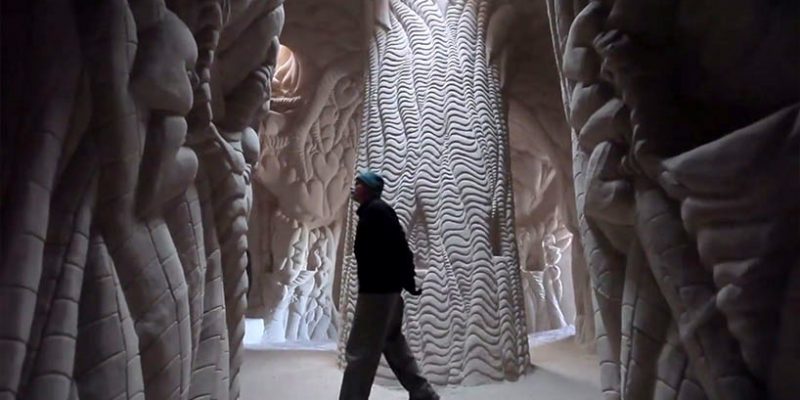 68-year old Ra Paulette spends his days alone with his dog, deep inside a cave, carving the walls into abstract shapes. When he gets paid, he charges $12 an hour. He uses no power tools… only basic hand tools. And he says he is having “…the time of my life.” So… he’s crazy, right? In the words of the great Jimi Hendrix, “You have to go crazy and be crazy. Craziness is like heaven.” Crazy or not, for 25 years, Paulette has made it his life’s mission to encourage “spiritual renewal and personal well being” through the transformation of solitary caves into temples of beauty and environmental consciousness. In the sandstone caves of the New Mexico desert, the self-taught sculptor and architect carves amazing, transcendent spaces, full of light and the celebration of life on earth.

At his website, Ra states: “Manual labor is the foundation of my self expression. To do it well, to do it beautifully, is a “whole-person” activity, engaging mental and emotional strengths as well as physical strength. When digging and excavating the caves I break down all the movements into their simplest parts and reassemble them into the most efficient patterns and strategies that will accomplish the task while maintaining bodily ease. Like a dancer, I “feel” the body and its movement in a conscious way. I’m fond of calling this “the dance of digging”, and it is the secret of how this old man can get so much done.”

Despite the beauty and growing popularity of his work, Paulette has a reputation as an artist whose vision takes precedence over the opinions of others, including clients. Regardless of his reputation for eccentricity, he has created a number of stunning, livable commissioned spaces that include modern conveniences, like plumbing and lighting.

CBS Morning did a brief piece on Ra Paulette here:

For over 10 years Paulette worked on “Luminous Caves,” which he calls his “…final and most ambitious project.” Hiking over a mile into the desert each day, hauling loads of sandstone debris out of the cave in a wheelbarrow, the obsessive artist attracted the attention of documentary filmmaker Jeffrey Karoff. Karoff’s film, “Cave Digger,” has earned a plethora of film festival awards and an Academy Award nomination for best short documentary. Karoff himself was surprised that the film with such “niche appeal” became such a hit. Here’s a tease via the film’s trailer:

In the wake of the 2013 film, Paulette has become a bit of a celebrity, but he remains an independent and solitary artist. Meanwhile, a property outside of Taos New Mexico, featuring Ra’s carved caves is currently on the market.