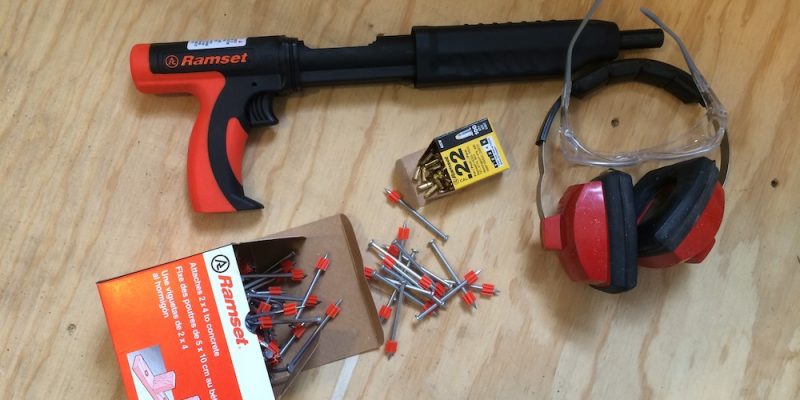 About three years ago, while temporarily off my meds, I volunteered to help my son create a bedroom in his previously unfinished basement. We put 2X4 pressure treated sleepers down over the concrete floor and on the concrete block walls. We put plywood down for the floor, capped it off with laminate flooring, and insulated and drywalled the walls. By far the biggest pain in the ass of the entire project (aside from hauling everything down there) was attaching the sleepers to the floor and walls. We used a hammer drill and Tapcon screws, which hold great, but which are extremely labor intensive. Faced with another project that requires quite a bit of wood-to-concrete mating, and remembering how much fun we didn’t have on the previous job, I figured it was time for a new plan. After doing a bit of research, I decided to invest in a Ramset MasterShot powder-actuated nail gun.

The Ramset MasterShot .22 Caliber powder-actuated tool was designed to make attachments to concrete and steel fast and easy. The MasterShot is capable of sinking nails from ½” – 3” long through steel, wood, and concrete. The “powder-actuated” end of the equation comes in the form of .22 caliber single shot powder loads. There are three levels of “powder power” to choose from, depending on the length of the nail you’re using and what materials you’re shooting through. The loads are color-coded: 2 (Brown), 3 (Green), and 4 (Yellow), with the higher numbers being more powerful. Here’s a quick look at the Ramset MasterShot from Home Depot:

Gunpowder And Three-Inch Nails – What Could Go Wrong?!

Sometimes we joke around a bit about the over-hyped CAUTIONS!! and WARNINGS!! that accompany pretty much every tool nowadays. This is one tool where they might be worth a read, assuming you’d rather not end up with one of this year’s Darwin Awards. A tool that can propel a 3” nail through steel and concrete qualifies as an exception to the “We don’t need no stinkin’ instructions!” line of thought. To me, anyhow.

The tool itself is pretty sturdy. It weighs in at just under 4-½ pounds, has a comfortable handle and a heavy-duty barrel. The Ramset MasterShot is simple to operate. To fire a nail (also referred to as a pin), just insert the nail into the end of the barrel. The nails come with a piece of orange plastic around the shank, which holds them centered in the barrel. Slide open the chamber, insert a cartridge into the breech, and close the chamber. Press the end of the barrel firmly against your work piece, pull the trigger, and BOOM – Part A is now attached to Part B! After firing, briskly open the chamber, and the spent cartridge will come flying out.

The following video from Ramset, which appears to be an internal informational clip, gives you an idea how the guns operate.

The Ramset MasterShot: Say Hello To My Little Friend!

I’m currently doing quite a bit of renovation work in a three-story duplex. It’s an old building, and the exterior walls are solid brick, around 10” thick, coated with plaster on the inside. The floors and ceilings are concrete, along with several of the interior walls. This sucker is SOLID! And solid is great, except when you’re trying to do certain things, like running wiring or plumbing, or attaching trim, or installing cabinets, or…actually, pretty much ANYTHING.

We had several chores that required introducing wood to concrete. The concrete floors have sleepers over them, with varying floor coverings over them. In the kitchen, there were plywood subfloors with vinyl flooring. Apparently there had been some long-term water leakage in the past, because parts of the subfloor – and the sleepers beneath – were totally rotted out.

After pulling out all the rotted wood and getting the area dried out, we cut and laid out some new 5/4” pressure-treated sleepers. I had bought some 2 ½” nails to hold them down. After donning safety glasses and hearing protection, I loaded up the gun, pressed it into the sleeper, and fired away.

Yikes. As I mentioned, the Ramset MasterShot can shoot any of three powder loads, with the yellow loads being the most powerful. Naturally, I had bought a box of the yellow; more power, more better, right? Well, apparently, not always. Thanks to a combination of more power and, apparently, some less-dense concrete in the target area, the nail went completely through the sleeper and buried itself in the concrete. At the risk of sounding like a coloring book, back to the big Orange store I went to fetch boxes of Green and Brown loads. It turned out that the Green loads were a go, and we had the sleepers attached quickly and easily.

Over or under penetration is a fairly common occurrence, judging by comments made in various forums and other reviews. The concrete in some walls and floors may be much harder and denser than in others. The other material you’re shooting through will also affect the penetration, depending on how wet or dry it is, presence of knotholes, and so on. You’ll probably have to experiment with different loads until you find the one that sinks your pins best, without overdriving them.

I had a few that ended up protruding ¼” – ½” or so, and these were pretty easy to finish off with a hammer. I had a couple of others that stuck out over an inch. I had pretty good success finishing these off by using a second charge of the lightest load (the brown). I loaded up the cartridge – WITHOUT inserting a new nail in the barrel – and placed the barrel over the protruding nail. This worked pretty well to drive the nail flush, or very close to it. Again, experimentation may be required.

After finishing up our floor replacement, and putting a fresh layer of vinyl over it, we needed to re-install some of our kitchen cabinets. The Ramset MasterShot and some 2-½” pins had the base cabinets firmly attached to the wall very quickly. Since we weren’t sure what the shear strength of the pins was, we decided to use a different method to attach the wall cabinets. We did use the tool to attach new baseboards, and to attach some surface-mount electrical boxes and junction boxes.

Other Ways To Nail It

In the powder-actuated tool universe, there are a variety of options. On a tight budget? There are hammer-strike models for around $26, that can handle nails up to 2-½” long. For fifty bucks, you can move up to a model that looks similar to the hammer-strike model, but has a trigger. Next in the lineup is the gun I bought, the Ramset MasterShot. These all use .22 caliber loads, and the beefiest one can sink nails up to 3” long. They can also shoot nails as short as ½”, and there are various sizes available, including nails with washers for extra holding power.

If you’re building a skyscraper or a bomb shelter, and you’ve got some serious, heavy-duty fastening to do, you can step up to the beefier, .25 or .27 caliber models. Many of these are “semi-automatic,” which means they take strips of ten nails, rather than having to load a single nail for each shot. Some can also shoot threaded studs. Prices range from a couple of hundred dollars up.

The Ramset MasterShot did a great job in our project. It seems very sturdy, and we had no misfires or malfunctions at all while using it. When we did have serious overdriving a couple of times, the piston that drives the nails in actually protruded out the end of the barrel – and stayed there. After muttering some foul and unhappy words, I once again dug out the user’s guide (twice for one tool – a new record!) Fortunately, I discovered that it’s an easy fix. They recommend tapping the piston back in with a soft-nosed hammer, but I found a short piece of 2X4 did the trick just fine.

The tool is very safe, if you use it properly. It won’t fire unless the chamber is closed, and the tip of the barrel is pressed firmly against the work piece. It’s relatively quiet, for something that fires a powder load, but I’d still recommend hearing protection. It has saved us a LOT of time and effort already, and we still have a lot of work to do on the second floor and in the basement. The expendables for it are reasonable and readily available, both online and in most home improvement stores. If your work involves attaching wood to concrete or steel on a daily basis, you’ll likely want a faster, beefier tool, maybe one of the .27 caliber models. For the serious DIYer, or someone who only occasionally goes off his meds to do this kind of work, the Ramset MasterShot should make your job a whole lot less miserable. 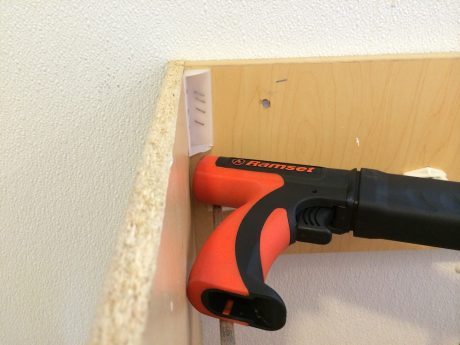 The Ramset MasterShot comes with a 90-day warranty. It’s available from Home Depot for around $90.

Our new sponsor ToolAuthority.com is a GREAT source for Ramset tools, fasteners, “ammo” and parts, all with great prices.