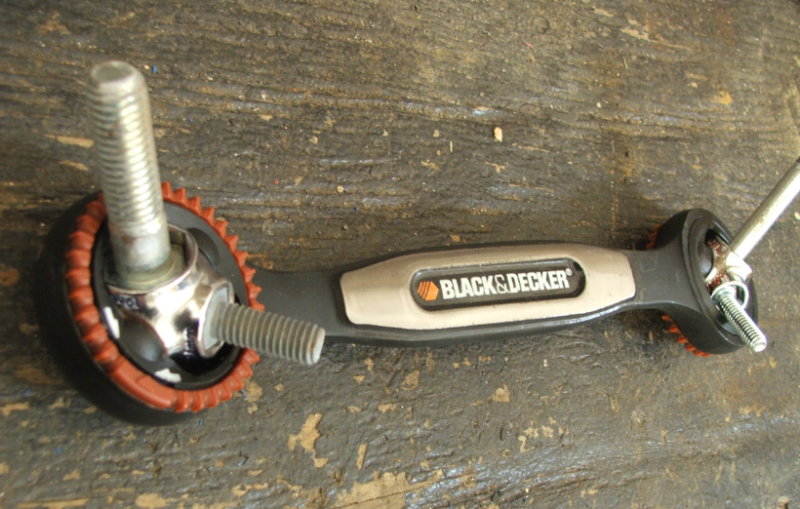 The Skinny on the ReadyWrench RRW100

So now that we have what the packaging says it does, here’s the skinny. The first thing I noticed about the Ratcheting ReadyWrench was its weight. Seriously, I considered putting it on my zombie-killing list solely on the heft. It is heavy and metal through and through, not the cheap vanadium chrome that a lot of wrenches are made of these days. The offset of the heads is perfect. It works great since it also functions as a ratchet. The socket heads are heavy and in fact both metric and standard fit well. The ratcheting action is also very smooth. I used this to run in a few lags and loosen several bolts, and the Ratcheting ReadyWrench never skipped or hung up as I worked either fastener in or out.

A Few Complaints About the ReadyWrench

I only have two – well, three real complaints. First, until you get used to the mechanism and flow of the tool it can be challenging getting the socket head lined up just right. So as you crank it the socket can rock back and forth. This problem comes under control once you get the angles correct, though.  Second, the Ratcheting ReadyWrench is built for standard (or at least mine was), so the metric sizes that correlate with the standard are not the common metric sizes that you may run into. For example, the most common metric I come into contact with is 12 mm or right around ½”.  Unfortunately, the ½” convert on the wrench is 13 mm. But this is not a major issue because I rarely work on anything metric. Finally, the last complaint is that the Ratcheting ReadyWrench is so dang heavy that it can really hurt toes and ankles if you drop it.

goes for about $19 and is a winner for both home and shop use – a great addition to the tool box.