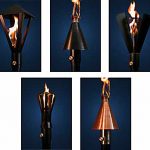 Today we’re going to talk about the Red Dragon Gas Patio Lantern Tiki Torches, but before we do, I need to explain why I’m excited by them.

While most people, when asked what their favorite movie is, would likely list something poignant like Shawshank Redemption or Schindler’s List, the flick I love the very, very best is …

Gidget. If you’re not familiar, it’s a 1959 camptacular film starring Sandra Dee as a pint-size surfer girl looking for love and the next big wave. I have every right to be embarrassed over this, but somehow, I’m not.

On many levels, I can admit this film is ridiculous:

But on other levels, it’s just so great. There’s a scene that inspired my love for all things tiki and it’s the big luau that the surf bums throw. Wild music, a big roast – and, of course, tiki torches (see, I finally got around to the point of the post!).

Back when I had access to a backyard, I threw a Gidget-themed party on more than one occasion. While I can say it was “honest to goodness it’s the absolute ultimate” the crappy tiki torches were sort of duds. Not only did they go out frequently, but they had a hard time standing up on their own (posing a fairly serious fire hazard, when I look back at it now).

Someone like me who enjoys the firey blaze of the torch (and you don’t have to be a Gidget fan to like them – just think how great it would look near a hot tub or pool) would do well to pick up some Red Dragon Patio Lights.

Admittedly, these torches are not cheap – but they are built to last and are solid quality. You can opt for either the portable model (in which the torch is mounted on a small cart) or a permanent model that comes with an 18” base for installing the torch in the ground. All torches stand 7.5′ to 8′ tall, are rated up to 49,000 BTU/hr, are made of all-steel construction and are powder coated for a long lasting, durable finish. A flame adjusting valve (that you connect to your own propane cylinder) allows a wide variety of flame length and width. Finally, it’s available in five different designs (my favourite, “fin”, is the one in the top right).

For a backyard experience bound to be “the ultimate”, check out Red Dragon Patio Light Torches. They start at $260 each.