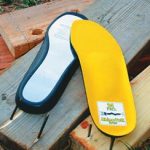 I have on several occasions stepped on nails, as most anybody at a job site might do. And even though I have ‘Hobbit’ feet, I have more than once found myself nailed to a loose board. I must say, roofing nails are not all that painful, akin to a pebble in the shoe. But a large 16 penny nail straight into the arch of your foot will make you think of word combinations that you never thought were possible.  Nails pose a real safety hazard for the ol’ feet.

If you have never had a foot injury of any kind, let me tell you that no amount of gauze and dirty socks can stop the bleeding, at least initially. I’m not saying you need to go to the doctor, but maybe someone needs to create foam to fill the hole. Until that day comes when we have healing spray foam, try this alternative: Rhino Tuff Puncture Resistant Insoles.

The Rhino Tuff Insoles are a foam and rubber insole like Dr. Scholl’s, with one
large difference. The underneath is a stainless steel plate capable of resisting a puncture with a force of over 270 lbs., which means that even I can step on a nail without puncture.   The Rhino Tuff Insoles come in several sizes, and you can even cut them down to fit your specific size. Now in case you’re worried that they are brawn without a sensitive side, the Rhino Tuff Insoles sport a pronounced heel cup, arch and metatarsal supports, and they wick away moisture. What more can you ask when you’re talking about something that could keep you from installing a peephole in your foot?

If my story of woe, including the 4-hour hospital wait just to get a tetanus shot (the hospital was the only place that had the tetanus shot in our area) isn’t enough to make you check out the site, just listen to what one reviewer had to say;

I used to step on nails occasionally with the only consequence being a very   sore foot. After the age of 50, however, the immune system slows down. I got a nail stuck in the big toe joint. Even IV antibiotics had no effect.  Gang green [sic] set in & they removed my foot. I won’t go near a construction site w/o a nail proof insole under my remaining foot! (Buy insoles big and cut them down for best protection!)

I’ll be honest – that testimonial alone almost makes me want to line my sandals with the Rhino Tuff Insoles. Excuse me while a shiver runs down my spine. Anyway, check out Rhino Tuff Insoles for more info and pricing and to read some other ‘interesting reviews’ as well.