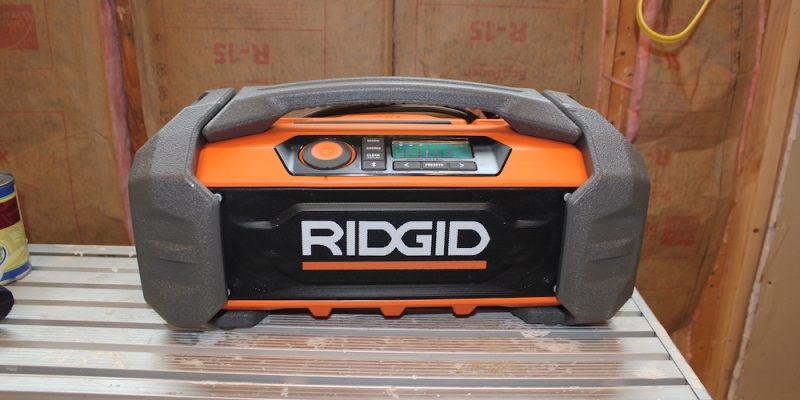 Like most people, my work day has certain essential rituals. The first task every day involves consumption of large quantities of strong black coffee. Once I’m sufficiently caffeinated to contemplate actually doing some work, the first device to get powered up is the music. Even back in prehistoric times (the 70’s), I needed my tunes to get things underway. Back then it was a 9-volt transistor radio (ask your parents). The sound was pretty tinny, but even tinny music makes the work day go better. Fast-forward a few decades, and now I generally set up either my iPod and a set of portable speakers (if there’s power available), or a small, old Ryobi portable radio when I’m powerless. Recently, the new Ridgid Jobsite Radio GEN5X rolled in for us to evaluate, and my musical options came kicking and streaming into this century.

Not your Granddaddy’s Boombox

The Ridgid jobsite radio comes fully assembled. Just lift it out of the box, slap in a battery or plug it in, and let the beautiful music commence! You’ll want to spend a few minutes setting the clock and a few radio presets; the manual has good directions, and it’s pretty straightforward. Before you begin, flip the radio upside-down, and yank out the little piece of plastic protruding from the battery compartment. This will activate the backup battery, so your presets don’t disappear every time you remove the radio’s power supply.

The radio has a beefy plastic case, which looks like it will stand up to a good bit of jobsite abuse. The specs say the Ridgid jobsite radio is weather resistant, which likely means it can survive being caught in an occasional shower. The instructions say not to submerge the radio in liquid, so if you were planning on going swimming with it, you’re out of luck – the Ridgid jobsite radio is NOT a flotation device. The radio has a dual power supply, which allows it to run using any RIDGID 18V battery or with the attached AC cord. Not shockingly, they recommend using battery power instead of AC when in damp or wet locations.

The new Ridgid jobsite radio has a built-in USB port, for charging your devices or smartphones on the jobsite. There’s also an Aux In port, so you can directly connect an MP3 player, eight-track tape player, or other music-generating device. These ports are protected by a little rubber flap, and tucked into a little sheltered compartment on the end of the radio, so you can stow your phone or other device while it’s connected. Ridgid even provides a short connection cord!

The Ridgid jobsite radio sounds good! It has a nice, full sound, and I like being able to adjust the bass and treble. The volume control is excellent. You can adjust it from just barely audible, for those mellow lunchtime moments, to a warehouse-filling max of 30. Even at that volume, there was very little distortion, at least during the limited time I was able to keep it at that volume before being directed to TURN IT DOWN!!

The previous incarnation of the Ridgid Jobsite Radio, the Ridgid X4, has good reviews. Along with some other tweaks, the new version improves on the previous model by adding Bluetooth capability. With the older radio, you could stream audio from your phone, but you’d have to leave your phone physically attached via the connecting plug for it to work. That’s not really a problem if you’re working in the immediate vicinity of the radio. It’s not so great if you’re up on the roof or on a ladder, and your phone is on the ground, and your boss or significant other calls.

The free Ridgid Radio App, available for iPhone and Android, allows you to be the boss – at least of your radio. The app downloaded and installed quickly and painlessly on my iPhone, and it’s very intuitive to use. I’m not known as Mr. Tech, but I was able to quickly pair my iPhone with the radio.

Unlike the days of yore, when your listening options were AM or FM, you can now choose what to listen to from any of several sites, such as Pandora, iheartradio, and Spotify. The app allows you to swipe through your list of presets, and tap whichever one suits the present jobsite mood, from “So Happy Together” to “Take This Job and Shove It.”

A slider controls the volume, although I found the most effective way to raise or lower the volume was to tap the icons at either end of the slider bar. The Ridgid Jobsite Radio app also lets you control bass and treble settings, and displays the time shown on the radio’s clock. When listening to the radio, the “Scan” function works as you’d expect, scanning through the frequencies. It stops on each station with a strong signal and pauses for about three seconds; tapping the “Scan” button again keeps the radio tuned to that station. The app also lets you choose which input to select: FM, AM, AUX or Bluetooth, and displays the status of the radio’s 18V battery.

The Bluetooth has a pretty good range. I was able to use my phone to control the radio from up to around 100’ away, with a clear sight line. This should enable you to replay – or perhaps skip – that special Miley Cyrus song from all but the highest roofs. The controls are very responsive, with almost no lag time. Once or twice when I did lose connectivity, a message popped up letting me know, and telling me to try again. After clicking “OK” two or three times, the radio reconnected quickly.

If you decide you just want the radio off for a while, at the request of local law enforcement perhaps, or so you can hear the compressor better, press the “Radio Off” button, and your wish will come true. Note: If you only want the sound off briefly, say until the cops are around the corner, a better bet would be to just hit the “Mute” icon, then crank it up when you’re ready. When I used the app to turn the radio off, I couldn’t get it to turn back on again using the app; the radio’s power button had to be physically pushed. No biggie if you’re five feet away, more so if you’re on the roof…

Is The Ridgid Jobsite Radio Playing Your Song?

If you need music to get through YOUR workday, check out the Ridgid jobsite radio. It’s rugged, it sounds great, and it provides the ability to listen to music from pretty much any source you choose. I had no trouble cycling between listening to FM radio, my iPod, and music from Spotify streamed wirelessly through my iPhone. The ability to charge an MP3 player or phone with the USB port is a definite plus.

The only feature I’d like to see added actually has nothing to do with the radio’s performance. Since the Ridgid jobsite radio can be powered with any 18V Ridgid battery, it would be hugely helpful to be able to use that attachment slot to charge the battery itself, when the unit is powered by AC. This would enable tradespeople using Ridgid cordless tools to have access to a freshly-charged battery without schlepping along a charger. Just sayin’…

Speaking of the battery, the Ridgid Jobsite Radio will easily get you through your workday on a single battery. I stuck in a fresh 4 Ah battery and fired it up at noon. I left it on all day, and when I went to bed just before midnight, the battery still showed two bars of charge. At 7:30 the next morning, the radio was still working, but soon started making a sad beeping sound and flashing “Batt.” In any event, it lasted over 20 hours, which is slightly beyond the length of MY standard work day.

The new Ridgid Jobsite Radio should be available in May or June of 2016, with an expected retail price around $129. It comes with a three-year warranty; battery and charger are sold separately. If you’re ready to upgrade your jobsite music experience, give it a listen. The radio will be sold at Home Depot and other locations; we’ll let you know here when it’s available. 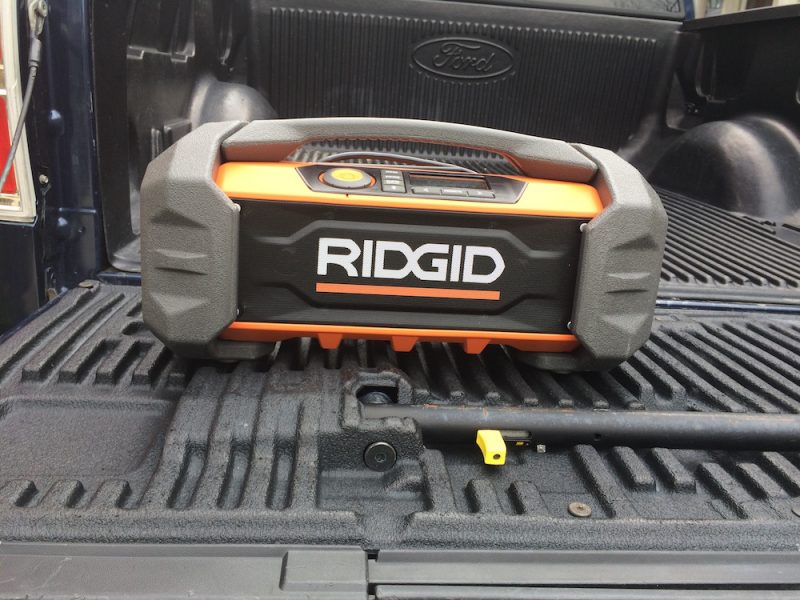