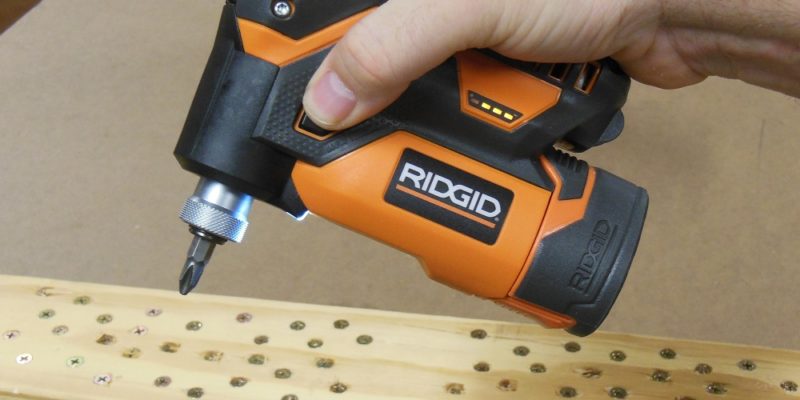 This post is sponsored by The Home Depot. I’ll admit, I’ve got a fair amount of RIDGID safety orange in my shop. The R4512 table saw and EB4424 oscillating spindle/belt sander, for example, have become staples in many home woodworking shops, including my own. I buy them because they work; they work well. Today’s delicious offering, provided to us by The Home Depot, is the model R8224K RIDGID palm impact driver – it’s compact, it’s light, it’s cordless, and it may surprise you. It’s also backed by RIDGID’s 3 year/lifetime (with free registration) warranty, which even covers the included battery pack and charger. But enough screwing around; let’s put this pint-sized impact screwdriver to the test!

Before we dive in, here are some quick numbers for you:

RIDGID R8224K – The Compact Impact That Could

This small impact screwdriver makes quite an impact. I mean, it’s probably not going to build decks and patios, but it’s definitely got its place in the shop and around the house: lots of places, actually. And some of them are pretty tight! The main attractions are a compact body, unique push-to-activate variable-speed drive, cordless portability and torque that you’re not going to get with a regular screwdriver (especially in cramped quarters).

Even before you get the tool out of the box, you’ll benefit from the fact that the RIDGID palm impact driver kit comes with a 1.5AH Hyper LI-ION battery and charger. That’s a substantial savings over purchasing separately. And if longer run time is desired, you can always upgrade to the 2.0Ah battery pack, which is sold separately. In a time when many tools are being sold “bare” – without a battery – it’s nice to get a complete kit every now and then.

Get A Grip On The RIDGID Palm Impact Driver

The R8224K 12V palm impact driver has no trigger, so you have flexibility in where and how you grip the tool. This might prove to be an extra bonus for those with arthritis or other hand issues. The pleasant contours and rubber grip material (RIDGID calls it “Hex Grip Micro Texture”) makes it easy to maintain a firm grasp, even with sweaty hands. And it feels great in the hand.

To operate, simply apply downward pressure to the bit. The harder you push, the faster it goes. It’s easy to control, so over-tightening isn’t much of a concern.

One nice aspect of this impact driver is how light it is. With the included battery, it weighs under 2 pounds. And there’s minimal vibration while impacting. In short, it’s not likely to wear you out any time soon.

For my fellow woodworkers who sometimes find themselves struggling with a stubby screwdriver in tight quarters (or worse, you need to install a screw – at full arm’s reach – deep within a cabinet where you can’t apply enough downward pressure), this palm impact driver is just what the doctor ordered: 80CC of R8224K. Stat!

Overall height of the driver and included #2 Philips bit is a squat 5”. The impact drive supplies torque and downward pressure while greatly reducing the chance of stripping your screw heads; all with little effort on your part. It just makes life easier. And really, isn’t that what new tools are all about? Well, that and bragging rights, of course.

The built-in LED powers on when pressure is applied to the bit – or when you press the button on the grip – and remains lit for 15 seconds after release.

The same actions also trigger the onboard battery fuel gauge, keeping you informed of remaining charge so that you’re never caught off guard.

Forward and reverse directions are selected with a switch located at the front. The center position locks the tool so that it can’t accidentally rotate when tossed around in a tool bag. However, even in locked position, the light and fuel gauge can come on; I have mixed feelings about that. Luckily, neither consumes much power.

The R8224K uses standard 1/4” hex shaft screwdriver bits. To insert a bit, just push it into the coupler and it’ll lock in place. Removal requires pulling out on the knurled ring with one hand and extracting the bit with the other. You can’t go wrong with this system; it secures the bit with no worries of it ever falling out and getting lost.

With a peak torque of 400 inch-pounds, I approached with realistic expectations. This tool isn’t intended to drive huge screws. I had the best luck driving #8 and thinner screws.

Most of the testing was performed with 1-1/2”, #8 screws (avoid drywall screws when using impact drivers). The screws were not self tapping and no pilot holes were drilled; I didn’t want to go too easy on the R8224K. However, you can get better performance with self drilling screws, such as GRK and SPAX, or by drilling pilots holes (especially with hard woods). Smaller screws will also yield more mileage per charge.

I Was Out-Torqued By The R8224K 12V Palm Impact Driver

I’d have to down a couple cans of spinach – or use sufficient leverage – to cinch a screw by hand as tightly as the RIDGID R8224K can manage. Out of curiosity, I tried the same screws with a regular screwdriver, both hands and all my might. The result? The R8224K is clearly superior to my measly mitts.

The palm impact driver sank #8 x 1-1/2” screws into a pine 2×4 in 4.40 seconds. By hand, it took me far longer. And I didn’t even have the grip or forearm strength to drive the same screw flush with the surface in the absence of a pre-drilled countersink. My butt was handed to me with regards to both power and speed.

Pushing The Limits Of The R8224K 12V Palm Impact Driver

Larger screws will likely require a pre-drilled pilot hole (and countersink, where appropriate). Case in point, the #10 deck screw pictured above was driven without a pilot hole and stalled just as it peeked through the back of a 2×4 (1-1/2″ deep). And the driver was not able to bust it loose again. But boy was it tight! While trying to get the screw back out, I broke the tip off of a regular screwdriver. I eventually removed it with large locking pliers to get enough leverage.

After wrestling for a couple minutes with the stuck deck screw above, I proceeded to see how many screws I could drive flush into a 2×4 – again with regular (not self-drilling) screws and no pilot holes – to get a sense of how well a battery charge will hold up.

I drove 4 batches of 30 screws – each #8 x 1-1/2” – into a 2×4. During each batch, the driver rested only long enough for me to grab and start the next screw. It worked hard almost non-stop for several minutes at a time, resulting in the bit and holder getting pretty warm to the touch (the hand grip never got hot, only the exposed metal). So I allowed it to cool before moving to the next batch. In real world use, however, it’s unlikely that the tool will experience such a relentless duty cycle.

After driving all 120 screws, the battery gauge was just dipping to the 1/4 mark. All screws where then removed – 60 at a time – and I still had a little battery life. I used the remaining charge to hang a couple sheets of 1/2” OSB onto 2×4 studs and finally lost juice most of the way through the second sheet. For a battery pack this size, that’s not too bad.

So, is the R8224K RIDGID Palm Impact Driver a worthy purchase? I’d say so. It powered through testing and proved that a 12 Volt impact screwdriver can walk the walk. Like other impacts, however, when it talks the talk it likes to be heard. It’s certainly not the most obnoxious impact driver on the market, but don’t assume a small frame emits a delicate whisper.

If you have realistic expectations, you’re going to find this palm-sized driver to be a pleasure to work with and a valuable addition to your tool kit. It neatly fills a niche and – in my opinion – earns its keep.

The RIDGID R8224K 12V Palm Impact Screwdriver Kit is priced at $89.00 and includes the driver, battery and charger. By default, it’s backed by a 3-year limited warranty. But there is a free lifetime warranty (covers the battery as well) available; all you have to do is register within 90 days of purchase. Registration is as simple as visiting www.RIDGID.com/registration.