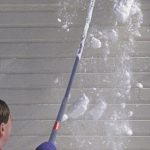 Having excess snow on your roof can be dangerous for a few reasons. For one, if it suddenly falls off (which happens frequently), it could fall onto unsuspecting people or items below. While it might seem fluffy and harmless, snow can be surprisingly heavy. If it has a row of hard, sharp icicles attached to it, or ice knives as some call it, it could really, really hurt someone.

The second risk is that your kids, drunk spouse, or neighborhood Jackass enthusiast could get some bright ideas about creating a roof slide:

Alright, that last one is kind of fun … but HomeFixated’s lawyers insist we suggest otherwise. So, to be clear, roof-based snow slides are not fun. At all. They are a really bad idea.

If you want to reduce your chances of injury or lawsuit this winter, ensuring your roof is cleared of heavy snow is a good idea. Traditionally, people have braved the cold and ice and gone up on their roofs and shoveled it off. This has its own risks.

May we instead suggest the 16-Foot Roof Rake from Northern Tool. The concept is simple – it’s a handled pole with a a 22″ wide by 5.5″ tall shovel-like end that easily breaks up, shovels, and scrapes snow from the roof. The pole consists of three interlocking sections (when fully assembled, measures 16′), allowing you to create a smaller pole or break it down easily for storage.

Reviews have all been glowing of the Roof Rake. Everyone from large home owners to trailer residents have sung the praises of this simple tool. It can not only save you from the headache and harm of a giant snow drift weighing on your roof or suddenly falling on those below, but it is easier on the body to use than climbing on the roof and shoveling. Just make sure you’re not directly under the snow mass you’re trying to clear off.

is available for just about $45 and is well worth the price.