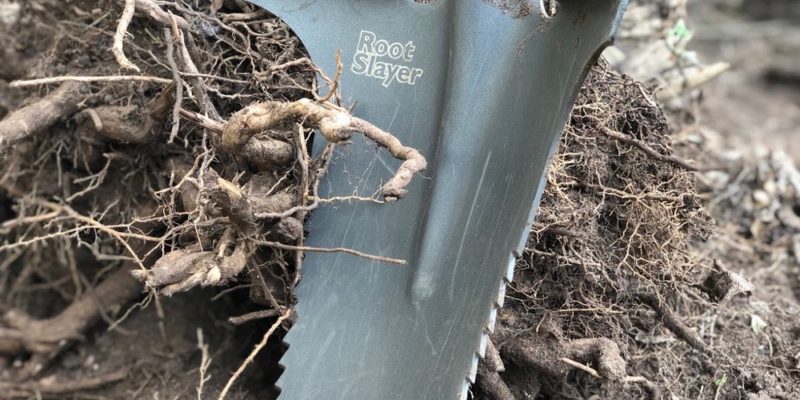 A list of several unpleasant activities of life might include: getting a root canal, being injured in a car crash, watching more than five minutes the nightly news, and, digging a well-established shrub or tree out of your yard. While we can’t really help you with the first three (other than saying brush & floss regularly, don’t text and drive, and avoid the news), we do have a secret weapon for you in the battle you might wage evicting unwanted plants, shrubs and even small trees from your yard. That secret weapon is called the Root Slayer shovel, by Radius Garden tools. Oops, so much for the secret. If you plan to do any plant removal in your yard, this review is a must-read!

If you have ever tried to dig up a rooty plant in your yard with a standard shovel, you know firsthand the pain and anguish involved. Standard shovels are great for cutting through loose dirt, but when you hit a root of any size they can be useless. It’s like trying to slice through a steel cable with a pocket knife. The pointy tip of most shovels means the blade of the shovel glances off roots rather than slicing through them. Even if the roots are not large, sometimes the sheer quantity of them makes them nearly impossible to conquer with a typical shovel.

With a major re-landscaping project in the works here, we had a lot of plants and shrubs coming out. I was determined to work smarter, not harder, so I scoured the internet for a specialized shovel designed to take on roots. That search led me to the very favorably-reviewed Root Slayer Shovel, made by Radius garden tools. I first discovered Radius garden tools at the National Hardware Show many years ago and was intrigued by the unique round handles that accompany many of their tools. It took me a few years to try them out, but I ordered the Root Slayer Shovel on Amazon recently and had high hopes for it helping me tackle the manual labor that lay before me.

What’s With the Root Slayer Shovel’s Round Handle?

When companies deviate from design norms, sometimes it’s just for marketing attention. In the case of the Root Slayer shovel (and some of the other tools from Radius), the design change really appears to be driven by good ergonomics. The round handle enables you to grip the shovel one or two-handed from just about any angle. It also gives you something to pull up on, other than just a straight handle, when the tool gets wedged into some particularly stubborn soil. The Root Slayer also has a larger version with a more traditional handle if you’re not quite ready to get a circular grip.

Concave vs Convex – Cutting Through Roots

One of the most challenging parts of digging up a shrub is the initial plunge into the soil and roots. With a typical shovel you often hit a dead-stop after the shovel hits a hefty root. Or, you’ll try repeatedly to slice through the root, but the convex (pointy) shovel tip results in the blade just bouncing off the root. With the Root Slayer, the tip goes in easy thanks to the dual tips that easily pierce the soil, and it manages to slice through smaller roots on the first try. You might still need a recip saw and a carbide tipped pruning blade to get through larger diameter tree roots, but the Root Slayer can handle most plant and shrub roots with relative ease.

Here’s a 15 second video from Radius showing the Root Slayer shovel cutting right through a 1/4″ inch plywood board:

Not to be outdone by the front of the shovel, the sides of the Root Slayer are lined with a formidable row of pointy teeth. I found these to be very effective at helping the shovel slice through denser groupings of smaller roots. I also used the sides when coming up on a thicker root that wasn’t readily sliced by the front of the blade.

While I don’t recommend gripping the Root Slayer shovel like a saw and trying to saw larger roots, the teeth are very effective when used on the downward plunge of the shovel. When I hit larger roots I would line up the edge of the shovel right next to the side of pesky root and then jump on the shovel. A few jumps and the shovel would saw right through the root.

And It Has Wings


Speaking of jumping, the Root Slayer shovel has robust “wings” which really give your boot a wide target when jumping and stomping the blade into the soil and roots. I jumped on both sides repeatedly and the wings never bent. The whole blade and handle of the shovel seems very solid and durable.

Should the Root Slayer Shovel be Part of Your Gardening Arsenal?

If you ever struggle against plant, shrub or small tree roots there is no question the Root Slayer Shovel is a worthwhile investment. I found the tool to be very effective, efficient and it stood up to quite a bit of abuse. While it’s not a pry bar (get a digging bar for that), I subjected the tool to quite a bit of force and it managed to stay in one piece. Whether you’re extracting one stubborn plant or dozens, you will find you will get the job done faster and with less effort with the Root Slayer shovel. Now get out there and go slay some roots!

You can find the Root Slayer for $50 on Amazon, where it currently enjoys 200+ reviews and a rare 5 Star rating: