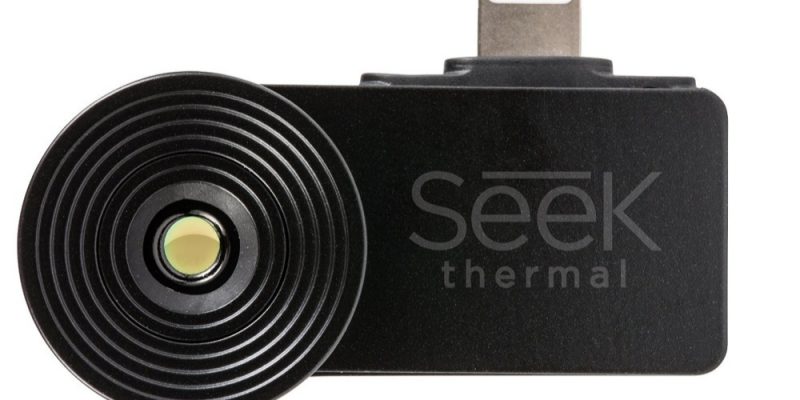 I’ve been in the energy efficiency game for years, and a thermal imaging camera is one of those tools I would love to have, but the price tag has always made it an investment that is hard to justify. I have occasionally borrowed one from a friend for special projects, but just have never had enough of a use for one to bite the bullet and spend the cash. Now, along comes Seek Thermal Imaging Camera, a tiny thermal camera that attaches to your Android or iOS mobile device. It is smaller than a pack of chewing gum and costs under two hundred fifty bucks, which sounds amazing. The big question is, how well does it work?

I had the chance to try out the Android model, and I have to say that, for the money, this little gadget is pretty darned good! The image quality is not up there with a top of the line professional thermal camera, but for the price, it is pretty impressive. The Seek app is really easy to use, and packed with features. You can remove the Seek watermark and add a time and location stamp to your images. It shoots both photos and videos. You can display the temperature in Fahrenheit or Celsius on the photo, or display the highest and lowest temperatures in the shot. You can also set it to capture only certain temperature ranges.

I took it around with me for a few days, trying it out. I found it to perform well and the software appears to be totally bug-free, unlike some other fancy phone gizmos I have used in the past. The app is really user friendly, which is a giant plus. As I mentioned before, the image detail is not outstanding, but it does the job, and does it pretty well. I set it up to record the high and low temperatures and checked it against my nice infrared thermometer, and the readings were very close. The only slight reservation I will mention is that I tried it on a rooted android phone running several custom installations of Android and the app ran but the phone did not recognize the camera. If you want to use this device, I would suggest that you run it on a stock android (or IOS) device. Also, the app pushes you to sign up for an account, but there isn’t anything particularly great when you get there. You won’t miss a lot if you take a pass on that.

As a homeowner, this little gadget could be great for helping to weatherize your home, looking for air leaks, missing insulation or water damage. It’s perfect for checking the seal on your refrigerator and freezer. It is also handy for identifying electrical shorts and loose wiring. Electronic hobbyists or electrical engineers may find it useful to inspect components and circuit boards. The manufacturer also suggests other recreational uses. Hunters can use it to track game, scout terrain, and follow blood trails. Boaters can detect harmful objects on the water at night. Campers can quickly scan around a campsite for dangerous animals. Really, once you have it, you will think of tons of things to do with it. That is, after taking a picture of the dog…

In addition to the Android camera Rich reviewed, Seek also sent us an IOS version. I too was impressed with what such a small form factor offered at such a low price point. The only real frustration for me is that I was unable to use the Seek IOS version with a protective case installed on my iPhone 6. The only solution was to either remove the case during use (a pain) or get a short lightning plug extension cable and hold the camera separately (also not ideal). I opted for removing the case, however if I were using the camera daily, I’d want a faster solutions. Ideally, it seems as if they had made the existing lightning plug maybe just a couple millimeters longer, it would have worked fine with my case too. The Seek camera also ships with a handy protective case to store it in while not in use. The case is small enough to put in your pocket and feels very strong. Compared to the Flir One, the Seek is far more compact. Lastly, the Seek is also great for telling your significant other they look hot, and then snapping the photo or video to prove it! Great for home inspections or relationship-building! 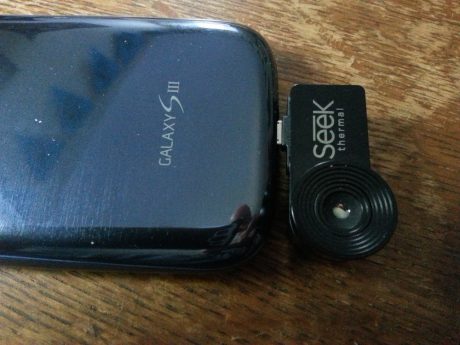 The Seek Thermal Imaging Camera is not only incredibly fun to play with, but it’s also very useful, as long as you have reasonable expectations for clarity / resolution at this price point. Whether you’re a home inspector, electrician, insulation contractor or any other home / construction pro, it would be great to have one of these tools handy. They’re also at a low enough price point that they even make sense for homeowners and gadget lovers that might not use the tool in a pro setting.

Where to Buy the Seek Thermal Imaging Camera

You can find both the IOS and Android versions of the Seek Thermal Imaging Camera online for around $249. The IOS version currently enjoys 4.5 stars and the Android version enjoys about 4 stars with Amazon user reviews.