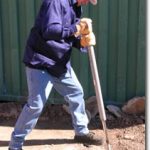 When a job sucks–like breaking up concrete, tamping in posts, or even breaking the bead on a tire–it’s nice to have help.  I like when bad jobs are made easier by companies that invent tools that can make my life easier.  It looks like that is the case with Callander Equipment’s slide hammer.  Part post-pounder, part jack-hammer–this tool is a mutant, really.

Jackhammers are great.  If you’re a giant person with super muscles.  I am not a giant, nor do I have much in the way of muscles–which is why the Slidehammer seems like something I could handle.  The idea is to use the sliding action to gain additional striking capability.  What is also nice about this tool is that most DIYers can probably manage it.  Rather than renting expensive equipment, or paying an operator to bring his equipment to your work site–you can use the Slidehammer to stay true to the DIY image we all cultivate.

With it’s multitude of attachments, it can do different jobs–making it more than a one trick pony.  The 13lbs. weight seems like a lot–but it’s light enough to make your job easier, while being stout enough to get it done.  Let’s face it though…the job is going to be tough anyway.  There isn’t a ton of fun to be had with any type of concrete bustin’ hammer.

The attachments are made of high-grade steel that are hardened to resist chipping.  Good feature to have when you’re pounding away at rocks.  The manual labor part of the Slidehammer is just lifting the tubular handle, and driving it toward your chisel/tamping tool end.  This design would allow you to virtually “let go” of the handle as it drives toward the tool bit.  Of course–you wouldn’t actually let go of the tool, but once you begin the downward thrust toward the tool bit–you’d be free to release your grip a bit and let the tool absorb the impact.  People that have used a post pounder will know holding on tight while driving a post into the ground gets old after awhile.  Why risk the chance of injury or place the additional stress on your body by using a crowbar, or hammering away with a cold chisel and a hammer?  Sounds like the Anti-Fun.

The other advantage is that the Slidehammer takes quite a bit less set up, and is a lot easier to transport.  Plus–I know exactly zero construction worker types that own their own jackhammer.  It’s just not a tool that you would have lying around.  Not so with the Slidehammer.

The Slidehammer is available directly from Callander Equipment for an amount of money they apparently don’t want to publish openly on their website.