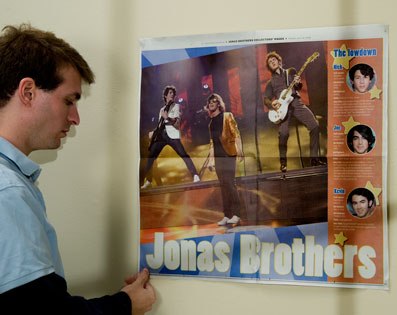 Sure, you’ve heard of, and probably own, many types of tape – duct tape, electrical tape, packing tape, masking and painter’s tape, Scotch tape, fish tape (no, it doesn’t smell like tuna), maybe even the odd 8-track or VHS tape. Each of these tapes is designed for a specific purpose, and they’re all pretty good at what they’re intended for – even 8-track and VHS tape (although there have been some technological advances since 1975 you might want to check into). Here are three tapes you may not be familiar with that would make excellent additions to YOUR tape arsenal!

Joe’s Sticky Stuff—It’s Not What You Think

Ever taped up a poster? Ever taken it back down, along with a chunk of paint, or a little strip of wallpaper? Ever muttered a colorful phrase after doing so, while visualizing your landlord cackling and refusing to relinquish your security deposit? Joe’s Sticky Stuff was created just for you! Actually, according to the Vat19 website, it was invented and perfected behind-the-scenes in Hollywood, and was originally used to secure props in place without leaving behind any sticky residue and without damaging the item or the surface to which it was affixed.

This is another one of those products that, once you have it, you come up with dozens of uses for. Some suggestions from the purveyors: Secure signs, hang items for presentations (even in hotel conference rooms or clients’ offices without fear of damaging their walls or windows), hang awesome Jonas Brothers posters in your co-worker’s cubicle, or display your children’s artwork without thumbtack holes or tape which may rip the paper when removed. Use a small piece to keep picture frames or paintings level without marring your walls, decorate rooms and remove decorations without having to repaint walls, hold down a table cloth during a windy outdoor birthday party, and keep little area rugs or bathmats from sliding around. It could prove very useful in the shop, too, for example, to temporarily hang a set of blueprints over your “Senorita Makita” calendar when your better half will be dropping by…

I could use a roll just for my vehicles. I have a little slot in my dash that my IPod fits nicely into. Unfortunately, I sometimes seem to accelerate a tad too, ah, briskly, causing said IPod to slide rapidly out and drop a foot onto the center console, after which it sometimes fails to function normally. A little chunk of Joe’s would be the perfect restraining device. I also swap my EZPass back and forth between my car and my truck. The car has a mounting strip attached to the windshield; the truck doesn’t. if this stuff will hold up a phone book, as they claim, my little 2-ounce transponder should pose zero problem.

Joe’s Sticky Stuff is simple to use; cut a piece off, stick it to the wall, door, windshield, or other mounting surface of your choice. Then peel off the backing, and firmly press the object to be attached onto the tape. Time for it to go away? No problem; give it a twist, and it’ll pop right off. For paper, posters, and the like, just slide a fingernail under the edge and slowly peel it up. Off it comes, leaving no gummy residue or tack holes, and all the paint that was there when you started.

Joe’s Sticky Stuff is advertised as being strong enough to hold your guilt, shame, and addictions. Vat19’s version of those consist of a candy bar, a VHS tape of a spelling bee, and a coffee pot stuck to one of the doors in their warehouse. Out in the real world, that may be tougher to calibrate, so I’ll leave it up to you and your psychoanalyst to decide how many rolls you’ll need…At $18 for a 20-foot by ½” roll, it’s a bit pricey, but if it eliminates a scattering of nail holes or chipped-off paint on the wall, and helps you get your security deposit back, it may not be a bad investment. And it IS packaged in a spiffy decorative tin…Get it online from Vat19.com,  and keep your guilt, shame, and addictions firmly in place.

Foil Tape – Because Duct Tape Is NOT For Ducts

EVERYBODY has at least one roll of duct tape around; I have some in the basement, a roll in my truck, a roll in my tool bag, a roll in the barn…you get the idea. And it’s unbelievably handy stuff – many a temporary emergency repair has saved the day, thanks to duct (also known as “duck”) tape. Duct tape has even been to outer space—it’s been included on every NASA mission since early in the Gemini days.

A common misconception is that duct tape is designed to seal openings or joints in HVAC ductwork. Duct tape, commonly defined as any fabric-based tape with a rubber adhesive, is NOT recommended for use on ductwork, as the material tends to dry out and become brittle, and may fail. It generally isn’t fire-resistant, and may produce toxic smoke if it burns; building codes in most U.S. states prohibit its use on ductwork.

So how do you seal those ducts? As you may have surmised from the heading, foil tape to the rescue! Foil tape typically consists of aluminum alloy foil with a pressure-sensitive adhesive. There’s also a paper backing you peel off, exposing the adhesive; peel back the corner, stick the end of the tape on the joint, and just peel off the backing as you go along. Press it firmly into place, and you’ve got a good airtight, water resistant seal. They even use a version of this stuff to do repairs on commercial aircraft bodies! (The mechanics call it “speed tape,” and they all keep it handy). If you don’t have a 757, you might find it handy for your automotive needs; it would make an attractive, low-budget racing stripe for your Plymouth Voyager or Yugo, and in a pinch, a few layers of it might be enough to hold your rocker panels together long enough to pass the state safety inspection one more time.

Foil tapes are designed to hold up over a wide temperature range; the Scotch 3311 foil tape  is rated for an operating environment ranging from -10°F to +180°F, is UL 723 rated for flame and smoke characteristics, and can be used under all weather conditions. Handy stuff to have around to fix a wide range of deteriorating possessions—or even to tape up a vent or duct pipe! You can get a Scotch Foil Tape 50 Yard Roll

Silicone To The Rescue

Rounding out our Trifecta of Terrific Tapes is Self Fusing Silicon tape. This could be the handiest tape you’ve never heard of. Available from several makers, most versions have pretty amazing characteristics that can be useful in making all kinds of temporary (or permanent) repairs. Rescue Tape, which is a popular brand if the stuff, touts the following features: 950 PSI tensile strength, insulates 8,000 Volts per layer, withstands heat up to 500 F (260 C), and remains flexible to -85 F! Rescue Tape creates a permanent air-tight, water-tight seal in seconds while resisting fuel, oils, acids, solvents, salt water, road salt and UV Rays. You can repair leaks on plumbing and hoses, use it to insulate electrical wiring or as shrink wrap, wrap tool handles, or as one reviewer on Amazon did, make an emergency repair on a huge gash in his Land Rover’s radiator hose, which sealed it up and enabled him to make it home.

The tape comes in a roll, with a plastic backing along its length to keep it from fusing to itself before you use it, which would render it somewhat less useful. To use it, you stretch it way out, keeping it taut, and then wrap whatever you’re repairing, overlapping about half the width of the tape as you go. The tape fuses to itself, and creates a solid seal. Various reviewers have used it for plumbing repairs, landscape irrigation pipe repairs, gas line leaks (gasoline, not natural gas), around the gear-shift lever on a motorcycle, on a golf-club grip, on a leaking air-compressor hose, and on and on. I most recently used some on the shank of my Klein screwdrivers, because I’m too cheap to pay $20-plus for an insulated model of something I already own. Once you have this stuff, you’ll find all kinds of uses for it. Rescue Tape Fusing Silicone Repair Tape

is available in eight colors, including clear (which I guess isn’t technically a color) from Amazon, where a 1” X 12’ roll costs from $10-13, depending on color (or non-color).

And that concludes our “Tale of the tape.” Hopefully next time someone tells YOU to “stick it,” one of these tapes will help you do it the right way. 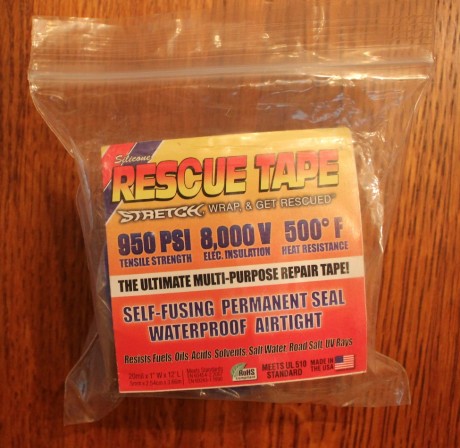