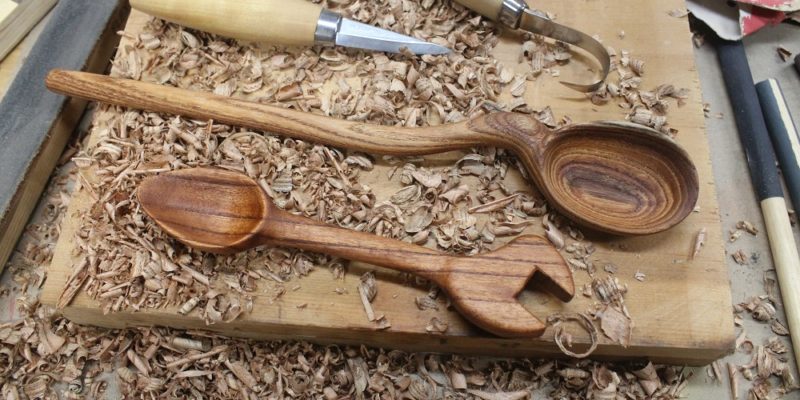 When MoraKniv tossed us one of their new woodcarving sets (handles first, of course), I realized I’d better acquire a new skill. And quickly! The set – which contains Mora’s #120 carving knife w/sheath and the #164 hook knife – happens to be perfect for whittling things like spoons, bowls and cups: all things I’d never done before. Sure, I’ve been carving wood since 1991, but I’ve never tried spoon carving. Nor had I ever used a hook knife. Well, it’s always nice to pick up new skills, and my journey from clueless to competent was rather enlightening and surprisingly fun. So come along and I’ll show you what I learned!

Mora Than One Way To Spoon A Cat

Over the years, I’ve carved a couple hundred pieces – typically with straight-bladed knives; it’s my comfort zone. On occasion, however, I do bust out the curved chisels and gouges. But that usually only at Halloween (and only to carve the pumpkin).

I could use the more traditional “mallet and palm” carving tools to scoop out a bowl or spoon, but deep down I’m a knife carver. And most carving knives are physically incapable of hollowing a concave surface.

But now I have this Mora hook knife. It’s the perfect tool for the job, but I had no clue how to use it. So I watched a bunch of videos and read up a bit. There were lots of questions I desperately needed answers to!

By Hook Or By Crook

Early in my quest, I found that “MoraKniv” knives are more often referred to by carvers simply as a “Mora knife” or a “Mora 120 (or other model number)”. Mora seems to be the most common brand name thrown around in the world of hook knives, so that was encouraging.

I also learned that a hook knife is sometimes called a “crook knife”. But if it loops all the way back to the handle, it’s called a “scorp”. And while we’re on the topic of names, the straight-bladed knife in the set (the Mora 120) is a style that’s often referred to as a “Sloyd” knife (derived from a Swedish word for “handicraft”).

Hack A Bowl – Let’s Carve A Spoon With MoraKniv!

Believe it or not, spoon carving is a pretty substantial niche in the world of woodcarving. I knew that a lot of carvers specialize in spoons; I’ve personally known a handful of spoon carvers. But I didn’t realize just how large the spoon carving community was. Hell, there are huge spoon carving gatherings, where people from around the world come together to fellowship, teach, sell, trade and carve spoons. Spoons. For many, it’s more than carving; it’s a love and a passion.

Serving spoons, ladles, eating spoons, “love spoons”… the variety is staggering. Some are intended for use, but many are purely decorative.

Before setting out on this journey, I really had no clue how to even hold a hook knife. I don’t know that I’d ever seen one used. The one that comes in the kit, the Mora 164, is set up for pull cuts with the right hand and push cuts with the left.

I’m left handed and normally hold my carving knives in my left hand. So manipulating a knife – and a curvy one at that – with my right hand felt strange (and unsafe) at first. But it’s all about technique. And if this grip doesn’t work for you, try a different grip. There’s more than one way to get the job done safely.

First, I learned to use this completely foreign stabbing-like grip that seems to be quite popular among many spoon carvers. Later on I realized that most of the cuts could be done with the “normal” grip I’m used to. So that was nice.

Don’t pull with your cutting arm. Instead, use small wrist motions, drawing the blade in an arcing motion. That way, you have control and the Chinaberry doesn’t become bloodwood.

For the record, MoraKniv also makes hook knives with edges on both sides. With those, you’d have to choke up more and push right near or at the handle (rather than the “back” of the blade) when doing push cuts. Another thing worth noting is that this knife is technically set up for a right handed carvers. But my left handedness wasn’t at all the problem I was worried it would be.

A Whittle At A Time – Continue Dishing The Bowl

Once the bowl began to take shape, I was able to use the hook knife in a way that felt more comfortable. I’m using my right thumb as a fulcrum while levering the handle back, creating a scooping motion with the blade. At the same time, gently pushing the back of the blade with my right thumb.

Maintain control of the blade by applying force with wrist and thumb motions only. That way, even if the blade breaks free of the wood, it can’t travel far enough to cause personal harm. Nibble away in small shavings. The process is a lot faster than you might expect. So don’t try to rush it.

Spoon Carving? You Can Handle This!

The bowl is mostly hollowed now. So I went ahead and laid out the overall shape and rough cut it with a band saw. Some people choose to carve away all the waste by hand, but you can save yourself a lot of time and effort removing the bulk with a saw.

From here, it’s just a matter of rounding everything off with the straight knife and touching up the inside of the bowl.

Loving Spoonful – So Much Fun I Had To Make Another!

Final Shaping With The Mora Sloyd

See You Ladle Alligadle – Finishing Up The Spoons

Before we get out of here, let’s throw some finish on these spoons. There are tons of options; I went with one of the easiest and quickest finishes to apply. Butcher block conditioner is perfect for food contact wooden items, such as cutting boards and wooden spoons. Plus it brings out the color and grain of the wood and is easy to reapply as needed.

The Inside Scoop – Final Thoughts On The MoraKniv Woodcarving Set

I’ve had a little chip time with these Swedish-made gems and have found no faults whatsoever. The 120 carving knife has a laminated steel blade that’s approx. 2.4” long. The 164 hook knife has a stainless steel blade curved to a 1/2” internal radius. Both are easy to sharpen, hold an edge well and feel great in the hand.

The only thing I was underwhelmed with is the sheath. It’s the same plastic one they use for several of their other knives, and it’s too long for the 120. Unfortunately, only the one knife has a sheath at all. There’s nothing for the hook knife. And really, that’s the one I’d most want a sheath for.

Try It For Yourself!

Obviously, these knives can be used to carve other things too. But if you’ve ever wanted to try your hand at spoon carving, I highly recommend the MoraKniv Woodcarving set. It’s a great way to get two excellent woodcarving knives at a great price. Just be careful with them; woodcarving can be dangerous and the methods I use might not be what’s best for you. If something feels off, step back and rethink your approach. Be safe, even if it takes a little longer.

I’ve used a lot of carving knives over the years and these perform up there with the best of them. If you don’t need the set, you can buy either knife – or any of MoraKniv’s other bladed offerings – individually. MoraKniv has distributors in over 65 countries, so they’ve got you covered.

I hope my adventure has inspired you to give spoon carving a try. Or maybe all we did was learn a thing or two together. Either way, it was a fun and rewarding experience. And it was easier than I expected.

The MoraKniv woodcarving set is available for just under $50: