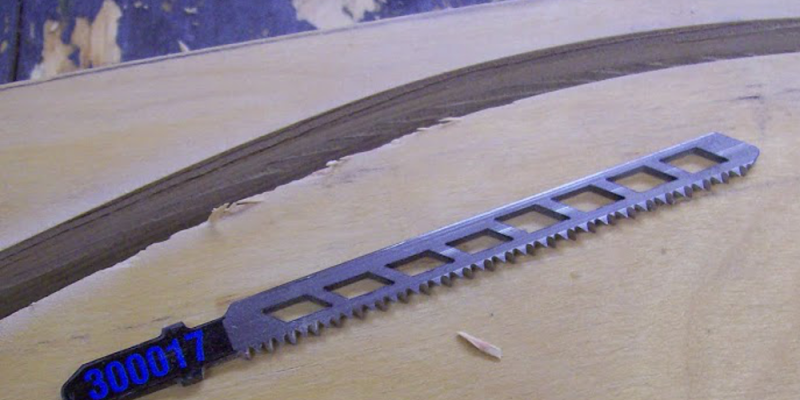 “I once cut a straight line with my jigsaw over 3 feet long” I proclaimed. “Look out Peter’s telling fish stories again! Yeah right, and I bet Bigfoot was right there taking pictures for you!” For me, the jigsaw will always be a rough cutting tool. A useful weapon in any arsenal for cutting inside or out curves in wood just shy of my pencil line. What I never considered the jigsaw for was making a clean, straight cut right on the line. I mean, I’ve just never seen it done and I certainly don’t believe anyone when they tell me they’ve done it! Well, thanks to Spyder Skeleton Blades, after today I might have to change that point of view.

Spyder was kind enough to send out some of their new Skeleton blades to Home Fixated for a review. You may recall in the past we took a look at the pros and cos of the Spyder double-sided blades

When I first opened the package I noted the unique design of this blade. It was quite a bit thicker and wider than what I was used to in a jigsaw blade. Also it features some cut outs to help reduce friction and over heating, but more on that later.

Let Get Down to Cutting!

I used my combination square to put a line straight down the 3 foot length of cabinet-grade hardwood plywood. This is high quality dense lumber and it’s a good testing ground for the Skeleton blade. Even better considering that this cut was made without the aid of a straight edge or cutting jig. It was just my budget jigsaw, Spyder blade and cut by eye.

The cut was fairly simple to track. I found myself having to correct it once or twice but for the most part it just cut straight. A lot of that has to do with the width of the blade. It didn’t allow much wobble in the cut and any curve was actually a bit difficult to make. A useful feature!

Now that is a clean cut! As you can see I was left with a very nice surface. A little sanding and it would be good to go. Add a straight edge to ride against and your circular saw might start to feel a bit neglected.

Now Spyder doesn’t market this as a general purpose jigsaw blade, but I thought I’d give it a go anyway. I took a couple of self guided curves both in a rip and crosscut orientation. While it was slower going than the straight lines, I have to say it performed well.


Will this blade make tight inside curves? No sir (or ma’am) , but it did a fine job on the larger radii I was cutting. I took a peek at the blade, expecting to see some bluing of the steel (a sure sign you’ve overheated the blade and softened it). Nothing. Which is excellent. So it seems the heat cutouts that give the blades their distinctive “skeleton” design worked as promised.

Are They Worth It?

I have to say yes. I’ve been doing woodworking for a while now, and I’ve yet to have my ‘El Cheapo $20 jigsaw perform half as well on a straight cut. I have used my jigsaw loads of times for rough cuts and inside curves but I have never once considered it useful for clean straight cuts, let alone clean cuts in ¾ plywood. I’m quite impressed. And that was all done freehand! Plus it will allow you the ultimate fish story with your DIY friends!

Well, they run about $3 a blade, which is quite a bit more expensive than many other blades. So it’s up to you if the added cost is worth adding that versatility to your jigsaw or not.

Peter Brown is a professional computer geek and a hobbyist woodworker in Northern California. He spends his weekends renovating his 1960′s house and escaping to the shop whenever his family declares that he’s “helped enough for one day.”