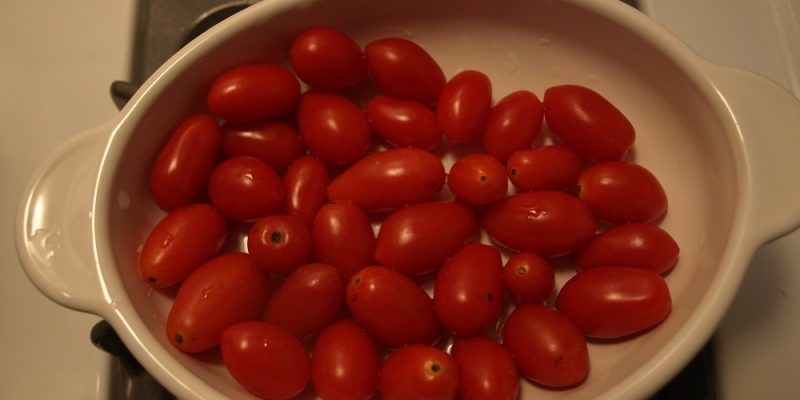 Anyone that read my recent article on boggy yards will be aware that my yard is currently under several inches of water that refuses to drain. I’m going to have to give my dogs swimming lessons if this continues because they’re one of the breeds that is not known for their skills in that regard. Of course, if they turn out to be the incredible sinking dachshunds rather than super swimmers, I’ll have to outfit them with floatation devices. Anyway, no sun and a forecast that calls for nothing but rain means that my plan for making sun dried tomatoes was out. Or was it really? Could I sneakily craft equally chewy, imitation sun dried tomatoes using nothing but my oven?

The internet says it can be done. However, that alone is not enough proof. Everyone knows that anything you find online (except the articles found here, of course) should be taken with a many grains of salt. After all, the world wide web contains enough so-called medicinal advice to convince even the biggest skeptics that they’re simultaneously dying of cancer, pneumonia, and kryptonite poisoning. But there are plenty of books that talk about how easy it is to turn a surplus of tomatoes into something tasty, like sun dried tomatoes, so it shouldn’t be too hard, right?

A quick internet search brought me to this recipe. I used it as a basis for my experiment even though I didn’t have quite as many tomatoes as they did. After all, I had been waiting for a sunny day to actually dry the tomatoes outside and a lot of them ended up rotting in the process. Those I threw out and you’ll definitely want to do the same if you find any spoiled fruit in your batch. Food poisoning is not pretty. Seriously, look it up on the internet! 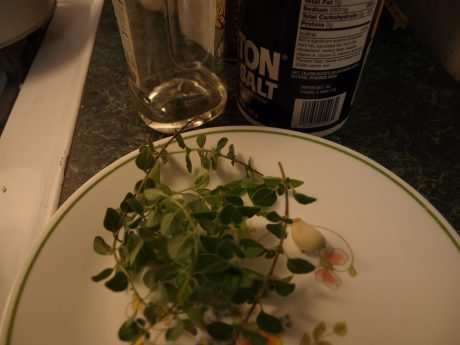 Olive Oil. If you’ve gone to all the trouble of growing the tomatoes and drying them yourself, why not use the quality olive oil? Save the cheapo store brand stuff for things like greasing muffin tins and other not so important tasks.
Salt. Somewhere in my kitchen I actually have a bottle of imported Italian sea salt. Could I find it for the purpose of this experiment? Don’t be silly! I had to use Morton’s instead. (Not that I’m complaining. It got the job done as always.)
Italian Herbs. Garden fresh is the way to go. The guidelines I used called for oregano and basil but you can use whatever Italian herbs you’ve got growing in your yard.
Garlic Clove. I grow most of the garlic my family eats nowadays so that’s what I used for this recipe. However, I like to use the kind that is already chopped and packaged in oil when my personal supplies run low. It works great too and it won’t leave your hands smelling of garlic for hours afterward.
Tomatoes. Most recipes that I have seen state that making sun dried tomatoes works best with cherry, paste, or Roma varieties. This is because the small types generally don’t contain as much moisture as the bigger ones do. You can still make oven roasted tomatoes using the large ones but they’ll probably just take longer to dry.

Knife. You’re going to want a sharp one to cut the tomatoes in half. Don’t get one with a wonky blade like I did or the tomatoes will end up unevenly sliced, which may impact your baking time.
Parchment Paper or Tinfoil. Use this to line your pan for an easy clean up. The recipe I used states that the former is needed but the latter works just as well.
Baking Sheet. Any type of pan with a flat bottom will work for this recipe.
Spatula. This comes in handy for scraping up the tomatoes once they’re done.
Plastic Bags. You’ll want these to hold the finished product until it can be consumed.
Marker. Use it to label the bags with the date. The tomatoes should keep awhile in storage.

I only ever use recipes as a guideline because that’s how my grandmother taught me to cook. So this definitely varies from the instruction that can be found in the link, but here’s what I did.

1. Gather all the stuff together, getting rid of any substandard fruit or herb leaves you come across. I had to go outside to pick the herbs. Rinse tomatoes and herbs to remove any debris that might be on them. 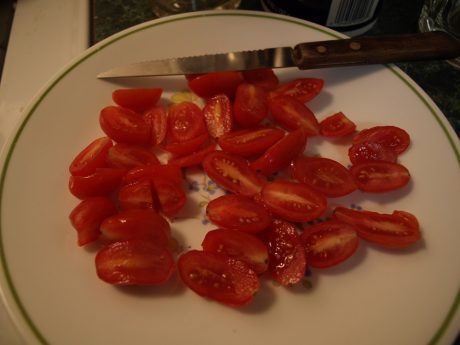 2. Cut tomatoes in half. Mince garlic. Pick herb leaves off steams. Sprinkle everything with olive oil and salt. Mix all the ingredients together using either your clean hands or a spoon. 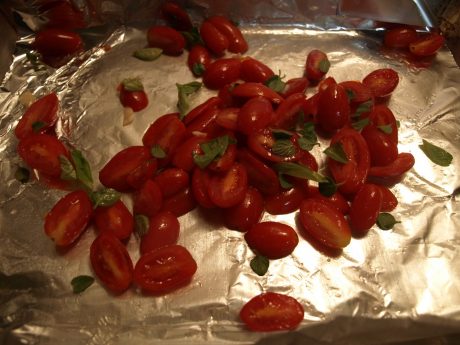 3. Make sure all the tomatoes are turned cut side down. I also made sure that most of the herb leaves and garlic bits got stuck under a tomato to hopefully boost the flavor.
4. Turn oven to a low setting and add the baking sheet. You’ll definitely want to bake them until they become dry and chewy. Mine were still squishy after an hour at  325°F so I baked them a while longer at 200°F to keep them from accidentally burning. 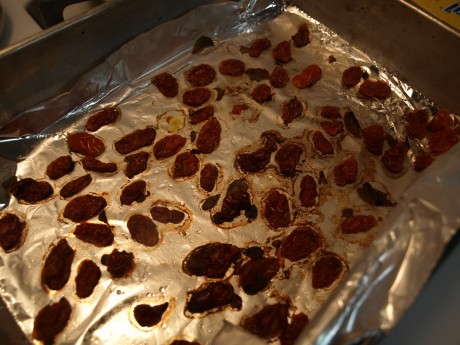 5. Use the spatula to scrape the tomatoes off the baking sheet if they don’t come off easily. Put the dried tomatoes in a plastic bag and label it with the date so you’ll know just how long they’ve been in your pantry, if they make it that far. Even though they could have used a bit more garlic I personally kept sampling them throughout the baking process. You know, just to make sure they were turning out okay.

If you give this a try and have any recipe variations to suggest, let us know in the comments below. Happy baking!