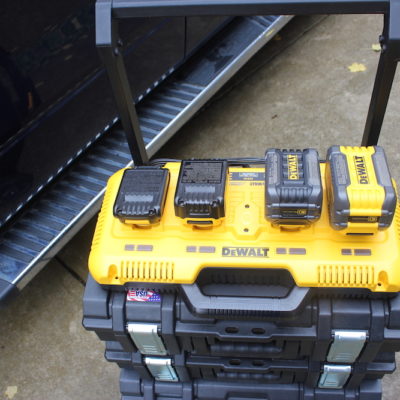 Thanks to the growing number of powerful cordless tools, many job sites are much more efficient and productive than they used to be back in the dark ages of (shudder) power cords. Cordless drills, reciprocating saws, LED site lighting, and even miter saws and table saws are all ready to leap into action, without having to search out and fight for available outlets. Capable as all these tools are, though, they still need a power source to get their motors running, and in most cases that power source is a Lithium-Ion battery. A crew using several high-demand tools may go through several batteries a day, depending on the task. Lithium-Ion batteries tend to be pricey, so having a quick way to get them recharged and back to work is critical. The folks in Yellow and Black just sent us their latest product dedicated to making that happen – the four-banger DeWalt DCB104 Simultaneous Charger. We’ll check it out, and take a look at the beefy new DeWalt FlexVolt 12.0 Ah 60V MAX battery – at no extra charge! END_OF_DOCUMENT_TOKEN_TO_BE_REPLACED