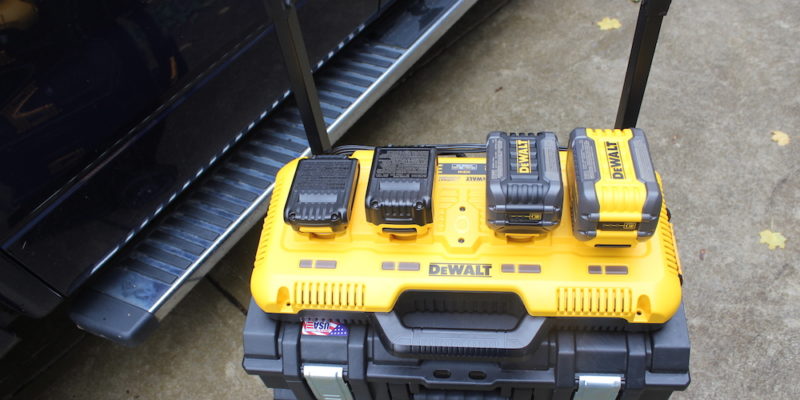 Thanks to the growing number of powerful cordless tools, many job sites are much more efficient and productive than they used to be back in the dark ages of (shudder) power cords. Cordless drills, reciprocating saws, LED site lighting, and even miter saws and table saws are all ready to leap into action, without having to search out and fight for available outlets. Capable as all these tools are, though, they still need a power source to get their motors running, and in most cases that power source is a Lithium-Ion battery. A crew using several high-demand tools may go through several batteries a day, depending on the task. Lithium-Ion batteries tend to be pricey, so having a quick way to get them recharged and back to work is critical. The folks in Yellow and Black just sent us their latest product dedicated to making that happen – the four-banger DeWalt DCB104 Simultaneous Charger. We’ll check it out, and take a look at the beefy new DeWalt FlexVolt 12.0 Ah 60V MAX battery – at no extra charge!

Why invest in a multi-port charger? While you could schlep several single-port chargers along, that would require finding multiple outlets to power them all. Assuming you can even find enough open outlets, this is not likely to earn you points with the other trades, who are also seeking voltage, and who are likely to unplug your charger to get it. A multi-port charger is the perfect solution.

Although there are a lot of multi-port chargers on the market, most of them use a sequential charging process. In other words, you can load it up with two, four or six batteries, but only one battery gets re-juiced at a time. This is fine at the end of the day, when you can load it up and have a fresh batch in the morning. When there’s lots of work to do, and you need a fresh battery NOW, your foreman may not be interested in hearing that your battery is number five in the recharging queue.

The Down Low On The DeWalt DCB104 Simultaneous Charger

The design team did a nice job of getting the little things right on the DeWalt DCB104 Simultaneous Charger. When batteries are inserted, they click securely into place, and won’t fall out when you pick the charger up by the handle to lug it to the job site or home. The power cord is nice and long (if only they could come up with a cordless charger!), and a cord wrap in the rear keeps it secure when not in use.

If the DeWalt DCB104 Simultaneous Charger will be used in a shop or other fixed location, it can be secured to a wall or table with the four inset mounting holes. If you’re going mobile, the built-in handle offers an easy way to schlep it. The DeWalt DCB104 Simultaneous Charger is also designed to be compatible with DeWalt’s ToughSystem, and clips snugly into place atop the stack.

Getting A Charge Out Of The DeWalt DCB104 Simultaneous Charger

For its maiden voyage, I did a bit of Yellow and Black mixing and matching. I snapped a 20V 1.5 Ah, a 20V 4.0 Ah, a 60V FlexVolt 6.0 Ah, and a big-daddy 60V FlexVolt 12.0 Ah battery (more on that shortly) into the DeWalt DCB104 charger. The red lights started blinking, the cooling fan kicked on, and the charging quadfecta was underway!

Although the batteries charge simultaneously, it obviously takes a lot longer to fully charge a 12.0 Ah battery than it does to charge a 1.5 Ah battery. The smaller battery was finished very quickly, in roughly 20 minutes. The other batteries followed suit, in order of size, until all were fully charged. As each battery reached full charge, its light turned solid, and shortly after the chargefest was complete, the fan shut off. When a battery is fully charged, it can be popped out of the charger without affecting the remaining batteries.

One other feature on the DeWalt DCB104 Simultaneous Charger will make life easier for users of DeWalt’s Tool Connect system. The Tool Connect system consists of Bluetooth tags and a free mobile app, to allow users to track tools, equipment, inventory, a lunch bucket, or whatever the tag is attached to.

The DeWalt DCB104 Simultaneous Charger has a dedicated spot for a Tool Connect tag on top of the charger, with pre-drilled holes and screws for attachment.

Ramp Up The Amps With The FlexVolt 60V MAX 12.0 Ah Battery

While it’s great to have a fast-charging simultaneous charger, it’s even greater if you can go longer before you NEED that charge. DeWalt recently introduced the Li-Ion version of an all-day sucker, the FlexVolt 60V MAX 12.0 Ah battery, model DCB612.

If you’re unfamiliar with their FlexVolt system, they’ve basically developed a battery that can detect whether the tool it’s in requires 20V or 60V, and adapt accordingly. It provides a lot of oomph to power DeWalt’s lineup of 60Vand 120V FlexVolt tools, and if you strap it on a 20V MAX tool, you may never need a charger again.

The battery geeks at DeWalt have been hard at work developing technology to pack more power into less space. The new FlexVolt 12.0 Ah battery is the same size as the 9.0 Ah version, and only slightly larger than their 6.0 Ah battery.

Like all FlexVolt batteries, it’s compatible with all 20V, 60V and 120V MAX tools, and if you don’t snag a DeWalt DCB104 Simultaneous Charger, it can be charged on any 20V MAX charger. Here’s the full list of features and specs from DeWalt:

Time To Take Charge Of Your Charging?

For anyone working in the trades, time is money. And money is also money. You don’t want to sit around waiting for your turn to bring your dead battery back to life, but you also don’t want to have to buy several extra batteries, to be sure of having one that works. With the DeWalt DCB104 Simultaneous Charger, you can get four tools re-energized during lunch, or while you use one spare battery. The charger is fast, rugged and well-made, and its ability to charge 12V, 20V and 60V batteries means it should handle ALL your DeWalt charging needs. I think it’s a great accessory, and I wish all the major brands offered one.

DeWalt backs the DeWalt DCB104 Simultaneous Charger with a three-year limited warranty, and a year of free service. To give you a risk-free opportunity to experience the thrill of simultaneous charging, the DeWalt DCB104 Simultaneous Charger is also returnable for 90 days. The FlexVolt 12.0 Ah battery is backed by a three-year warranty, along with three years of free service. If you decide you really need a break, it is also returnable for 90 days.

Buy the 60V MAX FlexVolt Battery from the Home Depot: