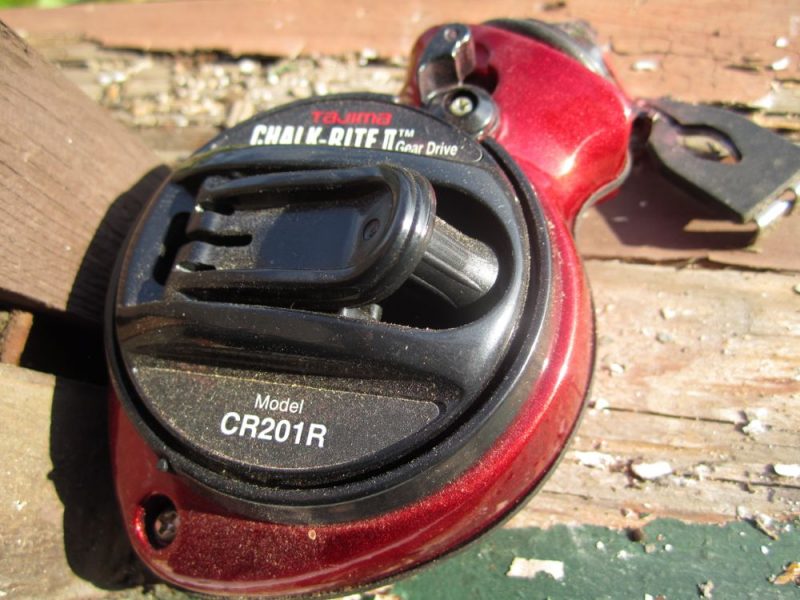 A few years ago, I set out on one of my usual obsessive missions to find the best of a particular tool category. I was looking for a chalk line reel, but wasn’t going to settle for junk that spilled more chalk than it did apply it in a straight line. I checked out several of the usual suspects from some of the major tool brands, and frankly just wasn’t impressed. Some reeled slowly, others were prone to spilling chalk excessively, while some had poorly designed anchors (including models that offer only a round ring). I wanted precision, solid build quality, good chalk control and reeling so fast it would make fishing show hosts jealous. That search ultimately led me to Tajima, a Japanese company that focuses on a very narrow range of quality tools.

After perusing the options on the chalk line reel market, I settled on the Tajima Chalk Rite II, with a bottle of their red Micro Chalk. Since I’m not officially in the trades, I don’t snap a chalk line frequently. However, when I do, I like the chalk line reel to perform well. I have seen many a chalk line snapped, and often you need a magnifying glass to figure out where the line is. Since a chalk line is created by a relatively simple tool, there are also many low quality / low performance variations on the market.

There are several details that make the Chalk-Rite a stand-out tool. First, the winding mechanism is fast and smooth. Once you snap your line, the last thing you want is a recreation of the reeling scene in The Old Man and The Sea. You want that line reeled-in pronto so you can get on with life. Tajima built in a very slick geared winding mechanism that makes quick work of retrieving the line. Second, careful attention was put into the “hook” end of the line. While some manufacturers are content to basically throw a keyring at the end of the line, Tajima put some thought into theirs. While the hook does a great job of grabbing the edge of sheet goods or dimensional lumber, you can also tap a nail where you need it and hook the chalk on securely. And, if you have a spare hand, I like how the hook has a pointy end so you can position your line with precision. Third, the chalk line reel lock is easy to operate and automatically disengages when you go to reel in the line. Lastly, I found the Chalk-Rite to make very precise, highly visible lines, which is a pretty important trait for a tool in this category.

Getting a crisp, clean chalk line snapped isn’t entirely up to the chalk line reel, the chalk you use has an impact too. I opted for Tajima’s own brand of red Micro Chalk, which is designed to cling evenly to the line and provide a sharp, fade resistant target for you. It’s available in white, yellow and blue as well. I find the red line gives great visibility on most surfaces, even a mostly dark brown window sill I was performing surgery on. It’s almost like have a stationary laser beam to follow. If you’re looking for a “semi-permanent” option, Tajima also makes a dye version in black and other dark colors. Both the chalks and the dye come in 10.5 oz and 32 oz bottles with easy-pour nozzles. More details are available on the full line of various ink and chalk snap-lines at TajimaTools.com.

If you’re looking for a solidly-built chalk line reel that performs smoothly and precisely, we recommend you check out Tajima’s options. You can find the Tajima CR201R-PR Chalk-Rite II Extra Bold Snap Line

for a very reasonable $25 on Amazon, and they even throw in a sample bottle of the semi-permanent red dye!