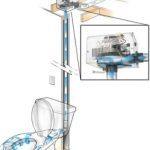 Oh, man. What will they think of next?

We’ve talked about the Swash, the toilet that not only washes your bits but air dries your derrière, and now we’ve found a contraption that sucks up the stinkies you create and pumps them out of the room.

The Toilet Bowl Exhaust System (or TBES) is a toilet with a vacuum channel below the lid that sucks the air and, uh, fumes into the tank and then out an exhaust channel that goes outside, thus providing you with an odorless bathroom experience. Hopefully this isn’t a disappointment to the people of ICBE.org who make the claim that they like the smell of their own “lovely” farts.

I had to laugh when I thought about the tail end of the exhaust pipe. You have to be pretty strategic about where you put that. The scene from Monty Python’s Holy Grail where the French guard taunts King Arthur by saying that he will “fart in your general direction” comes to mind. If only he had the exhaust pipe of the TBES. The direction of the emissions would no longer be ‘general’ but direct … and probably epic in, uh, concentration.

The full Toilet Bowl Exhaust System (including a timer!) will set you back $575 plus shipping and installation.