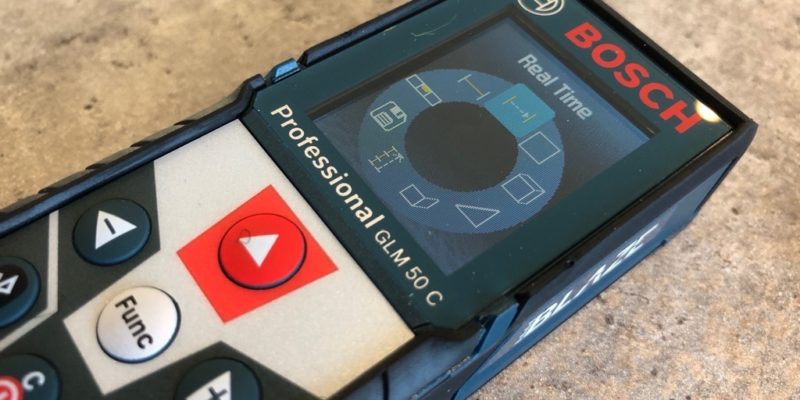 This post is sponsored by The Home Depot. Remember back when TV was broadcast in black and white? Me neither, however it sounds pretty miserable. Cones are in our retinas for a reason, and viewing things in monochrome is intensely boring. When laser distance measures first hit the scene most of them had small, monochrome displays with tiny digital readouts that were tough to read in good light and impossible to see in low light. Join us as we review the Bosch Laser Measure GLM 50 C to see just how far these handy measuring devices and their displays have come.

As you might expect from the introduction, the Bosch GLM 50 C features a color display. While it may not be suitable for streaming your favorite Netflix show, it’s a welcome improvement over the first generation of laser levels. For basic measurements, they are displayed in a large, legible font. For some of the other functions of the tool, the large display gives room for multiple measurements, Bluetooth status (more on that later) and even a level indicator.

Navigating through the various functions for the Bosch GLM 50 C is as simple as hitting the function key and then scrolling around the wheel of fortune. Ok, it’s not really called a wheel of fortune, but there is a wheel of options in the user interface. Moving from one mode to another is very efficient. You can even get your geometry geek on and do things like calculate indirect measurements, surface area, etc. I don’t have a need for those things, but you might. They are there if you need them.

One handy feature I really like is the built-in spirit level and inclinometer functions. While it’s not going to replace your four foot Stabila level, it’s handy for quick level checks and works well for checking the level of flat surfaces. When you enter the level mode, the Bosch laser measure will display a circular spirit level when placed flat with the display pointing up. Turn it one its side, and it switches to display level and incline percentage. In the past I’ve had to use a big, bulky inclinometer to check things like the slope of a window sill. Now, this pocket-sized gizmo makes quick work of that.

The Limitations of Lasers

While displays have progressed, the ability to stop a laser mid-air has not. If, for example, you’d like to measure a table, it’s no problem to measure from one end, but having the laser stop at the end of the table is tricky assuming it’s not pressed up against a wall. To address this, Bosch throws in five “target cards” – and, no, they are not gift cards to buy a tape measure at Target. Rather, they are brightly colored cards sporting crosshairs, with an adhesive lower edge. The idea is to stick the card to the edge of the surface you’re trying to measure.

As thoughtful as it is for Bosch to include them, the chances that I’ll ever use one are close to zero. For one thing, the cards are significantly larger than the laser tape measure and its case. That means you’ll need to store them somewhere else, which probably means you won’t have them with you when the need arises. Even if you did remember to bring them along, there’s a decent chance busting out a tape measure will be faster than adhering the card and lining up the shot. It’s still one area where old fashioned tapes are inherently more practical than lasers, with one exception – long distance measurement.

The Bosch GLM 50 C is spec’d to measure from 6″ to a whopping 165′. Bosch also says it’s typical accuracy is plus or minus a 1/16″. Sadly our home is not long enough to test the 165′ claim, but I did test out some very long indoor measurements in other homes. Based on those tests, we think it is reasonable to think it can stretch out to 165′. One thing to keep in mind is that if you intend to measure outdoors, measuring with a laser like this gets a lot more tricky. Outdoors the laser dot can be hard to see beyond 20 feet or so. And the laser measure itself will have trouble picking up a proper reading outdoors over long distances. But unless you’re in the business of measuring aircraft hangars or large warehouses, the Bosch GLM 50 C should have most of your indoor measuring needs covered.

I will readily admit it, although I’m a tech fan, the thought of connecting the Bosch GLM 50 C to my phone or ipad seemed pointless to me. In the interests of editorial thoroughness I downloaded the Bosch Measure app and connected the Bosch laser measure to my phone. Fast forward about 20 minutes and I’m sold on how useful this can be to some users. The Bosch app integration makes it easy to create a file for a client (or yourself), make a quick sketch or take a photo, and then accurately and clearly mark measurements on the sketch or photo.

Once you connect the Bosch Laser Measure to the app (which takes only a few seconds), you’re ready to create a new project. If you’re working from a photo, you simply draw an arrow on the dimension and then shoot that distance on the laser. Boom, it’s then clearly notated on the image. If you’re working from a sketch (which are easy to make in the app), the process is similar for each dimension. The Bosch GLM 50 C even gives you a little level indicator on-screen so you know you’re shooting a level line for highly accurate measurements.

The Bluetooth / app integration is quick and intuitive, and you will have professional looking results at the end. Once you’re done, you can export a pdf and shoot it over to someone via text, email, or a service like dropbox if you have that on your phone. And of course you can save a copy for yourself, directly to your phone.

All in all this Bosch laser measure has a lot going for it. About the only thing I didn’t like about the tool is that the Battery compartment doesn’t latch super securely on ours (it popped open unintended at one point during our testing). This Bosch laser measure runs on two AAA batteries by the way. If you’re looking for a full featured laser measure that can handle long distances, has app connectivity and doesn’t require you to have hawk-like vision to use, we think the Bosch GLM 50 C is a great choice. It’s not at the bottom of the price range for these tools, but it is far more feature-rich than the laser measures that occupy lower-priced model range. You can find it at Home Depot for around $119.