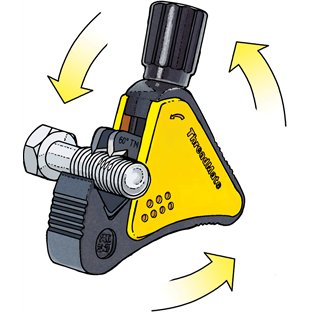 No, we’re not talking about that thread that keeps your marriage together through times of thick and thin, through times of late night writing when you should have done it the week before. (Or maybe even just a day or two before midnight on the deadline date…) And no, it’s not about two perverted spools of thread that….. never mind. It’s about the handy little tool that can save the day when you don’t have the two hundred-piece tap and die set you bought with your first credit card at Sears.

The ThreadMate Universal Thread Repair Tool is made in Israel where I’m guessing not a lot of Israelis are lugging around tap and die sets in the Gaza Strip. But wherever you are and whatever language you speak, wrecking a bolt is no bueno, especially if you don’t have a spare handy. But not too many of us carry a whole set of dies around. That’s when having a ThreadMate in your toolbox could be a life saver. This handy little tool rotates around the damaged bolt, riding the undamaged threads which guide the cutting blade to repair the rest at the same angle and spacing.

This mechanical thread restorer works on bolts with any thread pitch from 5/32″ to 1/2″ (4mm to 13mm). You can switch between right and left handed threads, too, by simply changing the order of the blades. The ThreadMate can also revive old hardware; it can be used to remove rust, scale, and paint.

One drawback, at least for now: ThreadMate’s manufacturer, Shilo Technologies, is just starting to break into the US market, so the ThreadMate can be difficult to locate. More on that below.

My Highly Scientific Test of the ThreadMate 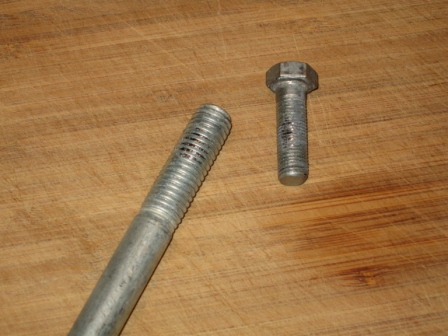 To test this little tool, I took two bolts and screwed up the threads with a pair of pliers. Usually when a tool says its upper limits are half-inch bolts like this tool says, it doesn’t really work on that size. So that’s what I went for, along with a smaller, much finer threaded bolt that was around 5/16.” Full disclosure: I didn’t beat on it with a hammer or bend the hell out of it with a vise. We’re talking thread repair here, not re-machining the damn thing. 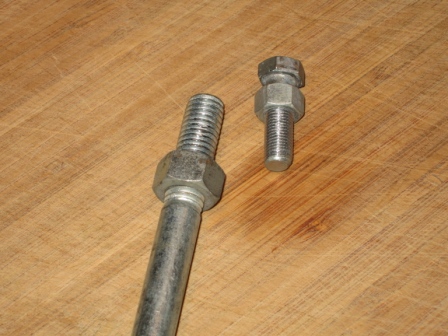 On both bolts I ran the ThreadMate once, and the nuts wouldn’t go on. It seemed like I could have forced them but instead I just ran the ThreadMate again, and voila’ – success. It wasn’t perfect, but it’s not meant to be. It’s there to get you by when you’re not at home with all your toys. In fact I can see me on a camping trip whipping this bad boy out to fix a Coleman stove or a bicycle lug nut and being the hero of the trip. Getting posted and tagged on Facebook. A video of me on YouTube. The Late night Show with David Letterman when he has Charlize Theron on. The ability to fix whatever threads I damage when I come crashing back down to Earth. That’s OK, the view was worth it.

Right now, Duluth Trading Company has it for around $35 (they’re also the company that provided us with a Threadmate for the review).