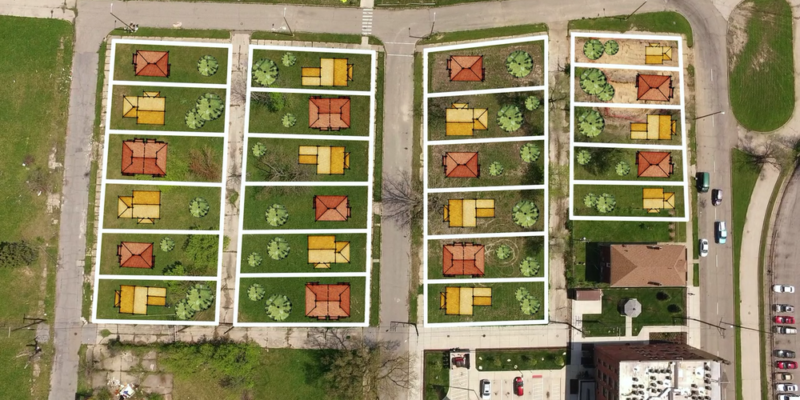 The first time I heard of tiny house communities was as I prepared to move to Colorado in 2013. I was forced to downsize in a big way. I didn’t have the luxury of time to give a great deal of thought on what to discard and what to keep. Therefore I had to be diligent in my effort to cast off the items in my life that no longer served me. What I discovered is that many (if not most) of the worldly goods I fiercely clung to with the belief that I would one day need for some, as yet, unidentified purpose were actually just energy zappers. Every time we make a decision to own an object or a recommitment to continue owning something is a decision to spend energy. It takes time and energy to go through boxes, it takes emotional energy to look at an object we keep for sentimental reasons. All this brings me to a thriving fascination with space efficient living, one I have been nurturing over the past few years, especially the growing tiny home movement.

Based on my own research, people choose tiny home living for one or a combination of the following reasons: to lower their carbon footprint, to save money or for the allure of a simpler lifestyle. The image above came from Boneyard Studios, one of the country’s first tiny house communities which is no longer in existence today. It is images like these that feed romantic notions of the sun setting behind, literally look at the picture, symbols of a simpler, low carbon footprint lifestyle. It all began in 20013 when I moved from a 1500 square foot house in Connecticut to a much leaner 750 square foot apartment in Colorado.

Although there is some debate on what constitutes a tiny house, for our purpose lets say a tiny house is anything under 500 square feet. My infatuation with tiny home living has, up to this point, only involved following Tiny House Blog and watching tiny home documentaries such as Tiny, a Story About Living Small, and most of all imagining with a certain degree of romanticizing what it would be like to leave behind the encumbrance of “stuff” and take up residence in one of these micro abodes.

Where’s a Gal to put her Tiny House?

One of the biggest stumbling blocks of turning this dream into a reality is, where does one put one’s tiny home? County ordinances and pesky zoning restrictions often make tiny home living next to impossible at best, much like off the grid dwellings. Minimum square foot requirements for residential dwellings are often above that of the average tiny house. The other prohibitive factor is a tiny house on wheels is viewed the same as an RV. Municipalities generally do not allow people to live in an RV, even if it is parked on your own property. It’s a catch 22 in many cases.

For example, I decided to ask my town, which is part of the Georgetown-Silver Plume National Historic Landmark District, what the zoning requirements are regarding tiny houses. The town clerk looked at me as if I had three heads, then responded with a vague answer, then said she would get back to me. When she did get back to me via email, she basically handed me off to someone on the town’s Design Review Commission (DRC).

The DRC representative I spoke to indicated that they had one inquiry over the past few years from someone who was considering putting a tiny home on a lot in town. The potential Georgetown, Colorado tiny home dweller in question decided not to go through with it. Based on the answers/lack thereof I received I can see why, they were vague at best. The DRC representative said things like “Well that depends” and “it’s not impossible.” She did indicate that the town has a strict policy about off grid houses on wheels not being aloud. My take on it all is an off grid tiny house on wheels is a tough sell, if not impossible to many municipalities.

Lets Think Outside of the Big Box

According to one article, Where Can You Park a Tiny Home, published in the New York Times, “easily upwards of 90 percent of tiny-house owners are living illegally, when it comes to zoning.” However, some communities have taken innovative steps to create zoning laws that support the tiny home owner. It usually requires your tiny home to be on a foundation and tapped into the grid, often on a sub standard lot.

While the drawbacks are numerous, people are finding innovative ways to incorporate tiny houses into the architectural landscape and often in the form of tiny house communities. A case in point, an organization in Detroit, Michigan that has found a way to, not only build a tiny house community, but also use the low cost of tiny house living to enable home ownership to those living below the poverty line. Cass Community Social Services (CCSS), a nonprofit based out of Detroit, Michigan, provides programs to help Detroit’s low income residents with housing, employment, food and health services. CCSS is in the process of building 25 tiny homes (250 to 400sf) as part of a program to provide low income residents (a combination of formerly homeless people, senior citizens, college students and a few Cass staff members) with the opportunity to rent to own.

Monthly rent is based on a $1 per square foot formula. After renting the house for 7 years renters become owners. They own the house and lot. Each lot is approximately 30’ x 100’ and each tiny house is built on a foundation. Building costs are kept to a minimum by using a combination of contractors and volunteers to complete the finishing work.

The idea is “all of a sudden poor people would have an asset that would change their life forever,” states Rev. Faith Fowler, Executive Director of Cass Community Social Services. According to Reverend Fowler, Cass Community Tiny Home’s addresses three major issues. First, it makes use of numerous empty and vacant building lots in a particular neighborhood. Second, It’s a bridge out of poverty through home ownership. Third, it reduces our carbon footprint, which is icing on the cake in my book. Another interesting part of the formula is renters will take mandatory instruction on financial literacy to help them get a leg up on managing their finances, therefore improving success.

The program has received international attention too. In fact, CCSS has put together a “how to” book of sorts for organizations, businesses and government bodies that share the ins and outs of their own process, i.e. designing and implementing the plan. Tiny house communities like this one are filling a much needed housing need.

Tiny house communities are popping up throughout the United States. Each has it’s own unique angle and/or appeal. Many aging RV parks have started to welcome moveable tiny homes, like Orlando Lakefront at College Park in Orlando, Florida. The Sanctuary in Minnesota offers tiny-house-on-wheels-dwellers space to park their tiny house for rent. The Tiny house movement continues to evolve and expand in new ways and while I have not taken the plunge into tiny house dwelling, mostly because I like the idea of being able to move my home, but don’t like the idea of living illegally, it continues to be on my radar as an enticing possibility in alternative living.

To donate to Cass: