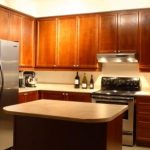 An island in the kitchen – very cool, a must, right? Maybe not. Think about it. Do you have enough room to have an island that is useful? And still have people move around without getting into traffic jams? Is your island a work surface or a place where you rest your elbows, have a cocktail, and shoot the breeze with the cook?

Islands are one of those things that people often think is going to make their kitchen when they do a remodel. Sometimes it’s a great idea. But sometimes it might be more of a follow-the-trend thing than good thinking.

Here’s the boring stuff that goes into really deciding whether an island makes sense for you:

Basically, my advice is to think about how you’re going to use that island, not how it’s going to look in your kitchen. Don’t let island envy dictate your kitchen configuration.