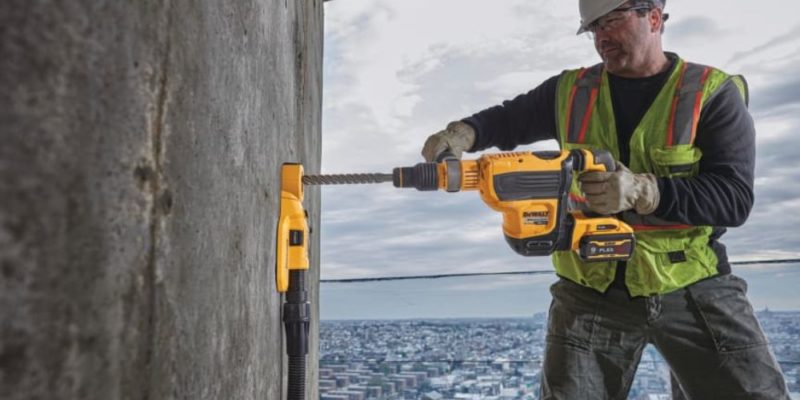 It’s late February now; a typically quiet time of year. Workloads for everyone – homeowners and contractors alike – are in a bit of a hibernation mode. Honestly though, here at Home Fixated, we don’t mind too much because it’s also the time of the year for some big trade shows like World of Concrete and ConExpo. Keep an eye out for our in depth show coverage for World of Concrete coming up in the next few days. There’s usually exciting tool-related information that comes out of these shows, some of which we’ll talk about in this edition of Tool News Nirvana. Let’s get started!

At the World of Concrete show this year, DeWalt announced a new combination hammer, the DCH614. This 1-¾” tool has an optimized drilling range of up to 1-¼”. It’s got a host of neat features, too, such as SHOCKS Active Vibration Control, which serve to make this tool easier to use. It’s set to be launched this month.

The VC4210 is a new job site vacuum and dust extractor from Makita. It’s got a well thought out 2 stage filtration system, which uses a flat filter in conjunction with the HEPA filter. The flat filter serves as a pre-filter, and is cleaned every 15 seconds by a reverse pulse of air. Additionally, the tool boasts 92” of water lift capability, which we guess would work perfectly in the event that the basement needs to be pumped out when our washing machine eventually breaks.

A second piece of suction-related news from Makita – the boys (and girls) in teal launched a cool new 18V LXT cordless backpack vacuum. For anyone who’s ever done the “floor-vac waltz”, with caster wheels constantly getting hung up on power cords, this tool might be a good solution. It features HEPA filtration, up to 62 minutes of continuous runtime (with 2x 5aH batteries), and an Auto-Start Wireless (AWS) control system.

MuckTape – Keeps Your Tape Clean So You Don’t Have To

In another piece of news from World of Concrete, MuckTape announced a newly designed tape measure that features an integrated tape wiper. It’s intended for users who might subject the tool to dirty, mucky conditions such as landscapers and excavators. It’s neat to see some innovation of such a core tool that’s present in almost everyone’s toolbox!

Protect Your Hearing With Honeywell

Also present at World of Concrete was Honeywell, with some new hearing protection technology. Verishield Smart Hearing Solution (VSHS) is a system involving an “over the ear” headset, an app, and some custom cloud-based software. The headset provides hearing protection against loud noises while also allowing users to hear conversations. It is also able to load ambient noise data to the cloud, which can be analyzed to identify particularly noisy areas on the job site.