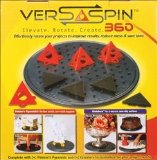 The VersaSpin 360 consists of a round 16″ turntable, eight Painter’s Pyramids (small plastic pyramids that you can balance items on) and eight Grabbers (a flat rubber surface to keep items steady and “grabbed” to the turntable). You use these items in combination with each other to expose all sides of an object that you’d like to work on. According to VersaSpin, the projects you’re able to take on include:

That’s a whole lot of hobbies! Maybe one day I’ll tackle everything on that list (well, probably not taxidermy), but as it happens, I had a particular chore that the VersaSpin 360 was able to come in handy for: sanding and painting a bookcase.

I snapped the Painter’s Pyramids onto the turntable easily and then balanced a side of the bookcase on top. So far, so good. Unfortunately, my random orbit sander only has two settings: “off” and “OMGOMGOMGAAAAAHHHHHHTURNITOFF!!!”. And so, when I attempted to sand the wood, I had both hands on the sander and no hands on board. Under the super power of my orbital sander, the turntable started rotating on its own, and not in a merry carousel-like pace but like a demonic Beetlejuice-esque tools-gone-wild pace. But the plus? The board stayed on the pyramids and didn’t fly off and decapitate anyone. Take two, and I kept my hand on the board while I sanded. Job done!

Onto painting. I opted to use a spray paint because I wanted to test my ability to get good coverage. Now, don’t be lazy like I was – cover your VersaSpin 360 with a drop cloth, plastic or wrap so that it doesn’t get covered in paint. Or don’t. Who am I to tell you what to do with your stuff?

I again placed the board on the Painter’s Pyramids and got my spray on. As my board was long, I had to flip it in order to paint its underbelly. You could wait for the paint to dry first (wise) or just go for it and flip it (not only an I lazy, I’m also impatient – what a great DIY combination!). Luckily for me, the very tippy point of the Power Pyramid that was touching the board is pretty small and only left a pencil-sized mark in the wet paint. For some of us, this is no biggie. If it’s an issue for you, just let the paint dry before flipping sides. Of course, this isn’t an issue if you’re painting a project that had a side that didn’t need paint. Spinning the turntable was effortless and I didn’t have to walk around in order to get all sides covered. Perfect, I hate walking!

The VersaSpin 360, which retails for $34.99, is available online and spins your project right ’round, baby, right ’round.