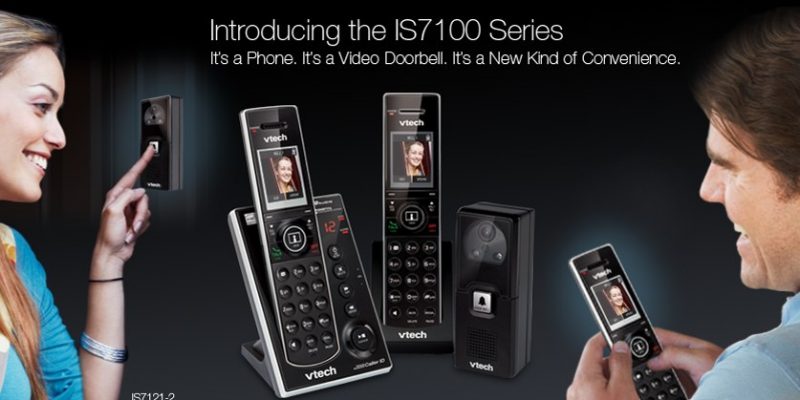 Ah yes, the front door. It’s the threshold to your castle. It’s where you welcome friends and family. And, it’s also sometimes the only barrier that thankfully stands between you and potentially unsavory elements of society that you may not want to chat with. But how do you distinguish between friend or foe when it comes to answering the door? Normally, the doorbell rings and you’re faced with a decision: 1) Do I open the door hoping it’s the camera crew from Publisher’s Clearing House there to inform me I just became a multi-millionaire? or 2) Do I assume the bell-ringer is hard-charging, door-to-door salesman with a 30 minute pitch on why a set of Encyclopedia Britannica back-issues is still a worthy investment? VTech’s new IS7100 Series of video doorbell phones can take all the mystery out of not only who is at the door, but also who was at the door when you weren’t home.

The doorbell hasn’t evolved much in recent decades. Traditionally, a visitor pushes a button and you’re treated to anything from a pleasing chime to a heart-attack-inducing buzzer. Once you hear the doorbell, you have no idea who is at the door. For all you know, it could be Dr. Hannibal Lecter looking to sip some nice Chianti with you. VTech is making up for decades of doorbell technology stagnation with several new innovations. The IS7100 Series doorbell phones offer photo, video and two-way audio capabilities. That’s in addition to being a cordless phone, digital answering system, push-to-talk intercom for any/all handsets, and voice announce caller ID. It sounds like the engineers over at VTech have been putting in a little overtime!

First, you’ll need to mount the camera/doorbell unit. It can be AC or battery powered, so installation doesn’t have to involve new or existing doorbell wiring unless you want it to. The unit features an adjustable camera angle, so you aren’t treated to a view of the visitor’s hairy navel. It also sports a couple infrared illuminators to provide night vision for visitors that insist on showing up after dark.

Inside the house, you’ll have one or more accessory handsets with integrated color displays. The camera/bell unit and the handsets are available as two or three handset kits, or individually. As soon as someone presses the doorbell button, the camera unit snaps a photo and sends it to the spiffy-looking handsets. At that point you can stream video, audio or both by using two buttons on the handset. It’s like a high-tech peephole you can carry with you anywhere in the house. 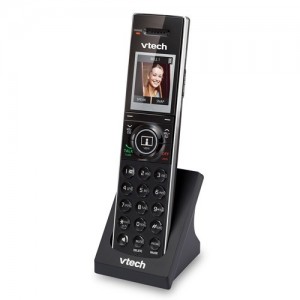 One nice thing about VTech’s new video doorbell capabilities is that you don’t have to drop whatever you’re doing when someone rings. Plus, once you know who is at the door, you’re able to communicate from the privacy and safety of the interior of your home. Of course, if it’s Publisher’s Clearing House with that over-sized million dollar check you’ve been waiting for, you can elect to rush to the door and happily greet your visitor the old-fashioned way.

Have you ever been in the shower, only to hear the doorbell? Inevitably, by the time you make it to the door, whoever was there is gone. This leaves you convinced you missed some incredibly important visitor. That missed connection might haunt you for days, or even weeks. With these new VTech Video Doorbells, a visitor photo is snapped for every doorbell-ringing visitor (unfortunately knockers will forever remain a mystery). Up to 100 photos are stored in a log and can be reviewed upon your return or exit from the shower. You’ll never be nagged with the uncertainty of who stopped by while you were showering again!

In case our vivid written description isn’t enough, you can check out the doorbell video phones in action here:

While we haven’t gone hands-on with this system, the VTech IS7100 Series Video Doorbell Phones appear to be a great solution to a vexing question: “Who’s at the door?” Prior to this product hitting the market, getting video capabilities for your front door often involved a costly custom intercom / surveillance solution. With a two handset phone and audio/video doorbell kit costing just under $120, the VTech IS7100 series seems like an incredibly affordable solution to better safety and convenience in your home. Get more details at VTechPhones.com

This is a sponsored conversation written by me on behalf of Vtech.  The opinions and text are all mine.