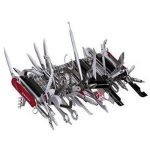 Here’s some breaking news! You no longer need a fancy MRI machine (or the health coverage to pay for it) to peer into the mind of a person who may have gone completely nuts. Instead, all you need is the Internet and the link at the end of the article to the world’s most insane Swiss army knife, compliments of Wenger. Ladies and gentlemen, that is what crazy looks like.

It’s safe to say that you won’t be able to bring this on a plane in your carry-on luggage. In fact, it might be best not to bring this out anywhere where people, especially potential love interests, might see it. I like to consider myself open minded, but if I saw the Wenger 16999 Giant Swiss Army Knife innocently placed in someone’s bedroom – I’d get myself out of there faster than you could say “safe word”.

This tool has 87 implements and “141 functions” although I think they’re being a little modest on the number of things you could do with this tool. I doubt the marketers even bothered to name things like “fight off a zombie apocalypse” or “fill in for the Star Wars interrogation droid”. So, we’ll leave it up to you what you can do with the Wenger 16999 Giant Swiss Army Knife and just list all that it comes with. If you have to go the bathroom, we suggest going now before reading this (it could take a while):

The Wenger 16999 Giant Swiss Army Knife is nearly a foot long and weighs seven pounds, so this is one Swiss Army knife that won’t fit in your pocket (and for the safety of your body parts, that’s a good thing). For all my mocking, this wouldn’t be the worst tool to have around in an Armageddon scenario. As far as DIY around the home, I imagine it’s more of a (very expensive) conversation starter than the first thing I’d personally reach for if I needed to fix something, but the people who own it seem to give it high marks for convenience and quality.

You can find the Wenger 16999 Giant Swiss Army Knife

and all its compact craziness at Amazon for $899.