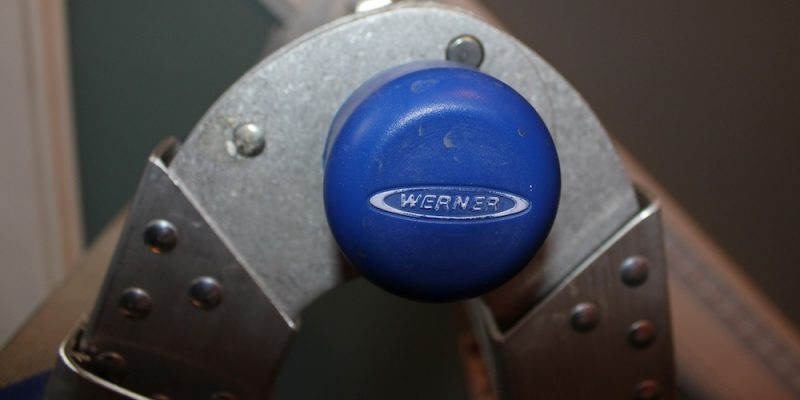 In my relentless quest to get to the top, I have accumulated a lot of ladders over the years. I own one 32’, two 24’, and a 20’ extension ladder, and one 8’ and three 6’ stepladders. I also own one Werner MT13 13’ adjustable ladder; if I had bought that multiladder sooner, I might not have so damn many others…

According to the folks at Werner, the MT series Telescoping MultiLadders are versatile and easy to transport. The telescoping design allows the ladder to be used in four different positions: as a twin stepladder, stairway stepladder, extension ladder and as two scaffold bases. In the stepladder mode, the multiladder can be used for one or two-person jobs with a duty rating of 300 pounds per side. The feet are slip resistant, and the ends of the ladder are flared for firm support. Smooth curved rails allow for comfortable climbing. All in all, a pretty versatile piece of aluminum! Here’s a quick video overview from Werner:

The Werner MT13 – Ladder Of Many Talents

I bought the Werner MT13 around three years ago, shortly after my daughter and her husband bought their first house. There was a pretty fair “to-do” list for the place, split between indoor and outdoor tasks. Inside we had ceiling light fixtures to change, bathroom exhaust vent fans to install, smoke detectors for the ceilings, curtain rods to install, and so on. Outside, we needed a way to get on the roof of their ranch-style house; additionally, the attic access is in the garage ceiling, about 9’ off the floor.

After looking at the options, the Werner MT13 seemed like a no-brainer; it was the perfect size to take care of all the interior work when set up as a stepladder, and would get us onto the roof, and into the attic, when set up as an extension ladder. At the sale price of around $110 including tax, it wasn’t a whole lot more than a 6’ Type 1A stepladder would have been, with the bonus of providing the extension ladder.

I was a bit leery, the first time I set it up to use. At 6’2” and 210 pounds, aka Clydesdale Class, a ladder that adjusts with hinges and sliding pins seemed a little scary. The fact that it’s Type 1A (rated to hold 300 pounds) cheered me up, though, and for my first tasks I set it up at its full stepladder height. The feet splay out a couple of inches, making the ladder very stable, and as I climbed up, it felt rock solid. As a bonus, my son-in-law, who is at least as big as I am, could climb the other side and carry the heavy stuff up; each side is rated for 300 pounds. A double Clydesdale!

The Werner MT13 worked for everything we needed in the house, and got us safely up onto the roof and into the attic – my favorite place! Note: When the MT is set up as an extension ladder, there is a slight bow and flex to it, but after going up and down the first couple of times, I had no concerns over its ability to hold my bulk.

Another place these ladders really earn their keep is in awkward spaces. Trying to hang paintings of your revered ancestors along the stairs of the family chateau? Got some painting to do, or bulbs to change, in hard to get at places? The ability to set up opposite sides of the ladder to conform to different heights gives you access to areas that would be tough to get at with a regular stepladder.

The adjustment process is simple. To adjust the legs to various angles, or straight out for use as an extension ladder, just push the blue knobs in and rotate the legs. It takes a little force to do it, but if my 5’1” wife can do it, I bet you can, too. The knob is spring-loaded, and will pop back into place at the preset detents.

To adjust the length of the legs, just pull out the spring-loaded J-hooks and rotate them slightly away from the holes, slide the ladder to the position you want, and rotate the J-hooks back into position so they lock into place. The hooks are pretty beefy, and once they’re in place, sturdiness reigns.

In fact, the entire Werner MT13 is a very sturdy bunch of aluminum, which you’ll first notice when you pick it up. The MT13 weighs just over 30 lbs; the largest version, the MT26, weighs just over 60 lbs. By comparison, a 24’ Type 1A extension ladder (the rough equivalent of the MT26) weighs 52 lbs., so there is a bit of a weight penalty. The payback is that you have all the other configurations you can use the MT for, and when you’re finished, you can easily store the MT in your utility closet or basement.

The Werner MT13 Is Ready To Assume The Position

If you’re a painter, siding installer, roofer, or someone else that works off a ladder in the same location for much of the day, you’ll likely stick to your regular extension ladder. On the other hand, if you move around from site to site, and only climb a ladder once in a while, for example a roofing estimator or a home inspector, one of the Werner MT ladders would make a lot of sense. They allow access to various heights with a single product, and are easy to transport, maneuver and set up on the job site.

A ladder from the Werner MT series would also be a great choice for someone that does handyman-type work for a living. With one ladder, that collapses down to a size that will fit in the trunk or back seat of most vehicles, you can perform tasks from changing out a ceiling fan to getting up high enough for gutter cleaning or window washing. For the typical homeowner, who might only use a ladder a few times a year, it eliminates the need to have a stepladder and an extension ladder.

It also frees up valuable storage space, leaving more room for your collection of Backstreet Boys bobbleheads, or the 1,500 Beanie Babies that make up your retirement portfolio. If I didn’t already have so damn many ladders, and had some climbing to do, I’d probably get the Werner MT22 or MT26. It would allow me to easily work on our 10’ ceilings as a stepladder, and to get on our porch roofs and up to the gutters on the main roof when necessary.

The Werner MT series comes in four sizes. Something to note: The lengths indicated for these ladders are “nominal” lengths; in other words, “That’s its name, and it really IS that long if you stretch it out all the way, but you can’t actually USE it like that.” It’s sort of like how a 2X4 really measures 1-½” X 3-½”. But different. Anyhow, the actual specs for the Werner MT series are:

Once you’ve figured out what size ladder will work for you, go get one – you can take your truck if you want, but it should fit just fine in your Honda Civic or Yugo. (If you have a Smart Car, you’ll probably have to hitch a ride with a friend with a real car). The Werner MT13 is available at Home Depot; they just had a $30 price drop, and it is currently selling for $89! Lowe’s has the 17’ version for $159 and the 22’ version for $189, and Home Depot has the best price on the 26’ model, coming in at $249 vs. Lowe’s price of $369! The prices can change, so it pays to shop around. Bring one home and experiment ‘til you find your favorite position! 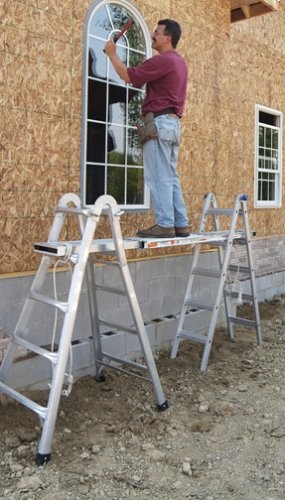