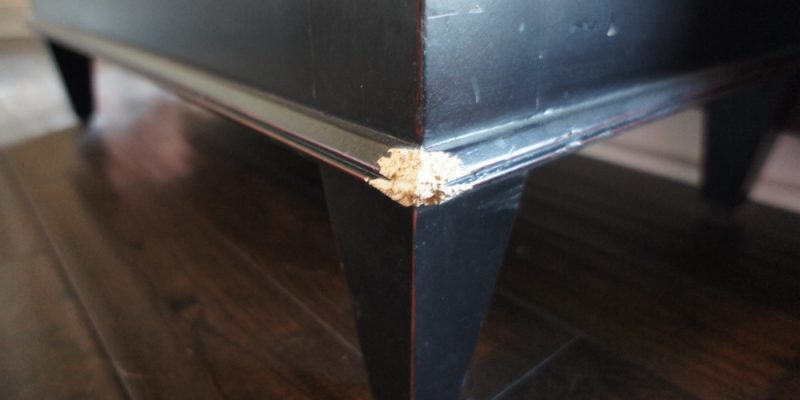 If you’ve ever had a dog then you know how destructive they can be, especially when they’re puppies, and I have two! I have a 5 year old Australian Cattle Dog aptly named Kirby (he also answers to Freak, Freakazoid and Weirdo) and a 3 year old “who knows what” named Stella (also known as Pretty). I hit the destructive dog lottery with Kirby, but that was all made up for when I hit the perfect dog lottery with Stella.

So about one year ago I left my house for a few hours with both dogs roaming freely. When I got home, as soon as I stepped through the door I knew something was up – there on the floor at my feet was a pile of wood splinters that seem to have originated from the mud bench inside the door. As I began to look around I noticed that the edge of the window sill, conveniently located at dog level, was missing a corner. The more I looked the more gnawed off wood I found! In all there were 4 damaged window sills, 5 gnawed off stair corners, one gnawed plinth block, damaged mud bench trim and a shredded dresser corner, all done in the space of about 2 hours!

My first inclination was to blame Kirby, but then I remembered that Kirby is named Kirby for a reason – when he destroys something he does not leave any evidence, he consumes all that he destroys. So that meant that my perfect dog Stella was the guilty party, her pedestal just took a very bad knock, not so perfect anymore.

I have never had to fix damaged wood like this before and I really wasn’t sure how to go about it. Of everything that was damaged the only thing I was able to readily fix was the mud bench since all I had to do was replace a piece of trim. For 6 months I thought about how I would repair the chewed off corners of everything, then one day I decided to try using wood filler. For those who don’t know – you cannot mold wood filler into any kind of shape – that ended up being an epic fail.

Another 6 months of thinking passed. I was almost to the point of calling someone (but who????) to come make the repairs when I happen to see a product called J-B Weld Kwikwood at my local home improvement store. It said right on the packaging “for gnawed off wood corners!” Not really, but it does say for rotted and damaged wood and it was only a few dollars so I figured what have I got lose.

I decided to try it out on the window sills, stairs and the plinth block first since the profile on all those is fairly straight forward. It didn’t take any time at all to mold it, let it dry and sand it – it was so easy to work with! I guess I don’t get enough exercise though because I was really sore the next day from squatting down so much to make the repairs.

I saved the hardest repair for last – the chewed off dresser corner, and I’m going to show you how I fixed it!

Gather your supplies and let’s get started; you will need one container of J-B Weld Kwikwood (a little bit goes a long way), sandpaper or sanding blocks for course, medium and fine grit, a putty knife or 5 in 1 tool and that pink thing in the picture below. So, that pink thing is a crochet hook, I do actual crochet with it, but it also happened to be the perfect tool for the job. It was exactly the right size for creating the grooves in the trim.

The first thing you should probably do is sand around the damaged area so the kwikwood has something to grab onto.

Then slice off a bit of the kwikwood, I seemed to always slice off twice as much as I need so you probably only need half as much as you think you do. Kwikwood is an epoxy putty, it has a tan outside around a white center, it kind of looks like candy so you probably shouldn’t leave it laying around for your kids or troublesome dogs to find. After you cut off what you need just knead with your fingers until the putty is one color. This stuff has a 15 – 25 minute working time so there’s no real rush to just slap it on there.

Once it’s been fully mixed then all you have to do is apply it to the damaged area in the general shape of the trim or molding, it will be a little easier to work with if your fingers and tools are damp. Once I got it into the general shape of the trim I used the putty knife to create the straight and slanted edges and I used the crochet hook to create the groove, it really was the perfect tool, it has a slightly pointed end with a rounded edge. When you are done shaping and smoothing then you just let it dry for about 1 hour, this stuff dries really hard so you should try to get it shaped as closely as possible to its final profile.

After it’s dried then get to work with the sandpaper. Use a coarse grit to knock off any excess material, hopefully you didn’t leave a lot or your might be sanding for a while. Then, switch to the medium grit paper to get it a little smoother, then switch to the fine grit paper for the final sanding. After the final sanding you’re ready to paint or stain (the package says you can stain it, but I haven’t tried that yet).

Unless you get down on your hands and knees and look at it I don’t think you’d be able to tell that it was ever chewed off. In all, it took me about 1 hour to make the repair. So, for less than $8.00 and 1 hour of my time I fixed something that a “professional” would have charged me $100 or more to repair (I confirmed this with my truck driver brother who sometimes has to repair items he damages during shipping). Next time your dog chews off the corner of your dresser, or window sill, or…whatever, fix it yourself! It’s easy!