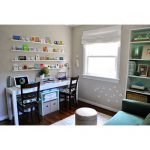 Age is such a relative thing, isn’t it? When we were recently selling our condo – which was built in 1994 – a real estate agent commented that it was an “older building.” I personally refuse to believe that anything that was “born” the same year as Justin Beiber was can be considered “old”. The home we just bought was built around 1920 – and even that isn’t really all that old, especially if you have friends who live in Europe.  We were once talking with a friend who lives in Paris about homes and when talking about our “old” house he laughed, dragged on his cigarette (how French of him) and said, “My apartment … is older than your country.” And it was – he was living in a building that was erected over 400 years ago which was “nothing special” according to him. So with all this in mind, you’ll have to excuse the bloggers at Young House Love for their slogan of “One family, plus one old house, equals love” – as you may not consider their mid-century home all that aged. It is, however, well loved and an inspiration for DIYers.

I’m a bit late on the Young House Love bandwagon as they already have an impressive following; so much so that blogging and renovating have become their full-time careers. The renovation and design work they’ve completed in their homes (they’ve completed one home reno and are onto house number two) have garnered them appearances in / on Apartment Therapy,  The Nest, HGTV, the New York Times, Better Homes and Gardens, Do It Yourself Magazine, the Nate Berkus Show and a ton of other neato media spotlights. But I figured that if someone as super cool as me has only just heard of these people, surely they’re news to other DIYers, wannabe interior decorators, and tired home renovators.

So who are these people? Young House Love is Sherry and John Petersik, two self-described “DIY Dorks”. They have slowly, slowly been fixing up their home – turning it from ho-hum to fantastically functional and magazine-worthy pretty. Even their “in progress” photos are pretty darn impressive, and frankly better than most my “after” projects. The site is inspiration central.

Along with their progress, the families also shares mentions of their family life, their own home decor and design inspiration (which they sometimes can’t use in their own home), and general projects and tips that they’ve fumbled through and lived to tell us about.

Warning: the website is a major time-suck, possibly taking you away from your own mid-way-completed projects … but it could also inspire you to get them finished – and finished well. Happy reading!