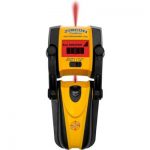 So, you’re looking to find a stud? Rather than go to places like Match.com or eHarmony, why not use a Stud Finder like the Zircon i700? Over the years, i’ve probably owned 3 or 4 Zircon stud finders. I’ve used them all with very limited success. I should insert a caveat here: I almost always seem to find myself in a home or apartment with plaster, not drywall. Sadly, plaster is to stud finders what Kryptonite is to Superman.

After taking a stud finder hiatus, I decided I needed to see how far stud-finding technology has progressed recently and decided to give the Zircon i700 a try. I’m going to be putting in a couple large bathroom mirrors shortly, and decided stud mounting would really be preferred over a non-stud install that results in the mirrors crashing dramatically to the floor resulting in over a decade of bad luck.

The funny thing is, I actually have pictures of the open walls (studs and all) from a recent remodel project. The not so funny part is that it’s still tricky to find the studs, even when you know roughly where they are. It’s especially tricky, when the walls are home to the majority of electrical and plumbing lines for the whole house. Needless to say, I really want to avoid drilling into a copper water line, or zapping myself with live wires.

So, how’d the i700 work? It actually worked pretty well. The i700 has several features that made it more useful to me than the stud finders of yesteryear:

Here are a few secret tips I learned from a) reading the instructions (gasp!) and b) watching the included DVD (double gasp!): Deep scan mode is handy if you’re working with walls over 3/4″ thick. Just press, remove and repress the i700 up against the wall, and it will blink “stud” to show it’s in deep scan mode. To calibrate properly for metal detection, the video actually recommends pressing the unit on in the air (using two hands), and then applying it to the wall. Why that’s not in the directions, or made more intuitive, I don’t know. But it results in more accurate reads for metal. The video also shows you how to fine tune the exact location of the metal (by default it detects metal in a very broad area).

I also had an amazing “Eureka” moment during the “What is a stud?” portion of the included DVD. It turns out “studs” are pieces of “wood” used in the framing of “walls”! Amazing! I think Zircon might have been able to assume that people know what studs are, especially when they are buying a “stud finder.” But maybe they’ve had issues with lots of ladies buying them thinking the gizmo will get them a hot date. If I bought something thinking it would land me a date, and all it did was point me to sticks in walls, I’d be disappointed too.

Anyway, the Zircon i700 is definitely a step up from earlier models, and can be useful if you’re considering a surgical removal of walls. It’s multiple scan modes, and nifty super-bright display are very handy. It even has UHMW pads for smoothly and easily sliding along walls! That’s “Ultra High Molecular Weight” for you non PHD physicists. Should you buy it? If you have standard drywall walls, then a definite yes! If you have funky, thick, plaster, or plaster and lath walls, a very definite maybe. You can find the Zircon i700 Stud Finder