If you’ve never been to the Consumer Electronics Show in Las Vegas, let me paint a picture. Nearly two million square feet of show floor. More gadgets than a pre-SkyFall James Bond, and an equally Bond-like level of booth babes. As a married man and marginally respected journalist, the booth babes of course had ZERO influence on my reporting. Instead of being lured by sexist attempts to grab my attention, I steadfastly sought out everything that might be of interest to HomeFixated readers. What did I discover in my mad quest to cover every square inch of show floor? As mentioned in Monday’s Bosch CES coverage, our 60+ tweets and photos live from the show provide a great overview. By the way, if you like getting the latest and greatest product info and tool news, you should most definitely follow @HomeFixated on Twitter. Read on for six tech trends to keep a close eye on, and dozens of photos. Unsubstantiated rumors have suggested booth babe photos may be included, so if you’re offended by that kind of thing, or if your corporate overlords frown upon racy attire, you may want to peruse the photo section at home or just read the initial six trends.

One of the things I love about trade shows is that if you spend enough time on the floor you can spot broader industry trends and in some cases get a peak into the future. Here is what I gleaned from the show floor at the 2013 Consumer Electronics Show.


Everything is becoming more interconnected. Things that were once purely mechanical are now not only battery operated, but also contain sophisticated sensors to help them function more effectively and efficiently. There’s been talk about appliances connected to your home wireless network, but now it’s truly at that tipping point. Your smart phone is also becoming a more and more essential hub for interacting with the electronics in your home. If we had a dollar every time a vendor mentioned their electronics also connected to a phone or iPad, we could have made it rain all convention long. Expect to see some interconnectedness that really adds value to your life, and other appliances interconnected more for marketing purposes than anything else. The market should sort out what should and should not be interconnected in the long run.


Grabbing a charging cable and plugging electronics in may not sound like much inconvenience, but when you think about it, it really is a pain. Especially since just about everything we love is battery operated these days. Wireless charging is already available on some phones and other small devices, and we have reason to believe you don’t have to look too far into the future to start finding it on your beloved cordless tools as well. From center consoles in cars that charge simply by resting your phone in them, to a desktop mat that will charge your tablet the moment you lay it down, expect to see a lot more wireless charging coming your way. I predict that within five years, wireless charging will be the norm for smartphones and probably other devices too.

3) Healthcare is Getting Outsourced to Your House
Going to the doctors can be a pain. Bosch and many others were showing off technology that helps manage your health at home. From devices that give the user details about their health stats, to products that report directly back to your doctor or others involved in your healthcare, there was no shortage of health-related gadgetry. While not quite at the Star Trek Tricorder level yet, expect to see more and more health-related technology enter the home in the coming years. We also came up with a great new health-related electronic invention. It’s a desktop box (and an app on your smartphone of course) that periodically yells at you to eat healthy and get exercise.

4) Robots (and Drones) are Finally Here! 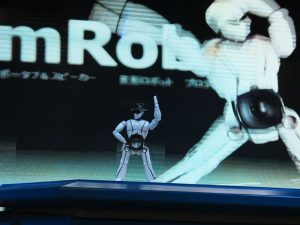 I’ve been waiting for robots to make my life ridiculously easy for years. Sadly, each new year is a disappointment that only highlights what things robots are still NOT capable of doing for me. I am happy to report there is hope on the horizon. There were quite a few robots on display, as well as several booths expousing the virtues of drones (not the kind that kill people, but the more mundane drones everyday folks can fly). One robot standout was the Winbot, a gecko-like square that manages to adhere itself to your window and then clean it. Think Roomba meets Spider Man meets Mr. Clean. Speaking of Roomba, iRobot had several varieties of floor cleaning robots and a new pool cleaning bot on the loose. They also had the latest generation of the Looj on demo. The Looj is a gutter-cleaning robot reportedly strong enough to fling wet concrete out of a gutter (not recommended by the way, it’s a messy test). Tosy the dancing and music-playing bot was also on hand at CES to entertain those that couldn’t resist hearing Gangnam Style just one, more, time. Watch him on video here. Next year I’m looking for the toilet-cleaning-bot, the beer-fetch-bot and the house-painting-bot.

5) The SLR Camera Is Dying a Slow, Painful Death


Camera companies have a secret. That secret is that you don’t necessarily need a giant pro-looking SLR camera and tons of expensive gear to achieve fantastic photographic results. Mirror-less cameras, compact interchangeable lens and impressive new sensors are bringing SLR performance to smaller cameras. Unfortunately, I think some brands are dumbing down their small cameras for fear of cannibalizing sales of their expensive SLRs. To them I say give it up. It’s time to get serious about small cameras rather than worrying about your SLR sales. Camera companies will make up the market share with increased sales of cameras that people actually want. Buyers seek SLR quality, but they don’t want to get a hernia carrying around 50 lbs of camera gear, or take out a second mortgage to get it. Keep an eye on the new cameras hitting the market, and keep demanding pro level features on a more practical form factor than the traditional SLR. They’re coming.

6) New TVs are Awesome, and Still Suck
This isn’t a home theater site, so I’ll keep this short and leave the heavy pixel lifting to the pros. What I can say is there was far less 3D than I expected and lots of focus on “4k” TVs. 4k, for those of you that haven’t heard about it, is basically Double HD. Sony had a side-by-side of a conventional HD TV and one of their 4k models. The image on both was a huge shot of a newspaper. Of course, the text on the 4k was far more crisp and readable. I suspect TV’s are engaged in the same war that cameras were battling out with megapixels until people and manufacturers realized at a certain point you hit some seriously diminishing returns. Keep your eyes peeled for 8k, 16k and maybe 32k in the coming decade. What still remains disappointing in TVs is the fractured nature of how many people now receive content. Is your favorite show on Netflix, Hulu, or Amazon? My wife and daughter still don’t know how to watch things on our tv thanks to the need to launch several devices and apps. Remember when you could just turn on your TV and start watching? We’re still not quite there when it comes to easily digesting content.

Read on for scintillating photos of products, “specially dressed booth staff”, “entertainment”, and random CES photos galore! Click any image for a more closeup view. . . you’ll want more details for some of these.

That’s all we have for this year, but stay tuned to HomeFixated as we provide more in-depth coverage of several of the products and technologies we found at CES.