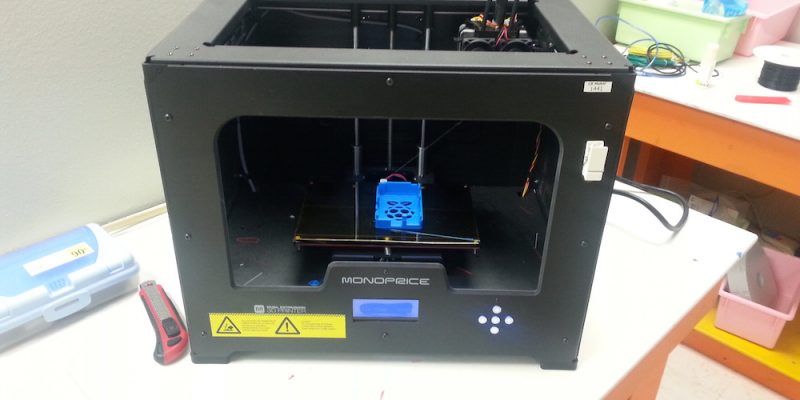 There is a whole lotta buzz out there about 3D printers right now. Folks are saying that 3D printing could be heralding in an era of “desktop manufacturing” echoing the major successes of desktop publishing in the 80’s, and desktop video in the 90’s. But is this fuhreals? Can the 3D printer unleash a new era of good ol’ American ingenuity? I’ve had the opportunity to get up-close and personal with a couple of 3D printers lately at the Iowa Innovation Learning Center in Hiawatha, Iowa. I got the chance to develop and print my own original designs, as well as open source designs from sites like Thingiverse.com. I gotta say, this technology is serious FUN. Is it ready to save America’s manufacturing economy from the onslaught of CCC (Cheap Chinese Crap)? Honestly, probably not, but I do think that this scrappy upstart tech has some serious potential.

There are plenty of different types of 3D printers, ranging from home-built do it yourself (DIY) models to high-end industrial machines. The lower-end consumer and office models print by melting a plastic filament that looks a little bit like weed-whacker string and squeezing it out in a fine thread that gradually builds the shape. This is called “additive manufacturing,” meaning that the material is built up, rather than a machining process that takes a block of material and carves or cuts it into a shape. This process has some serious implications for reducing waste in manufacturing, although there are still a lot of questions around that particular claim that I won’t get into here.

Right now, 3D printing and “Desktop Manufacturing” is in a bit of a wild west developmental stage, much like mature “desktop” technologies like publishing and video once were. The software applications to develop your own designs are built on several different CAD and 3D modeling platforms, and lack a unified user interface, a bit like the days before Microsoft Word grew into the standard for word processing. The learning curve for designing a really good model is still pretty steep for most people. But, it seems to be getting better every day. For those twisted individuals like myself that take pleasure in figuring out how to use and customize software and hardware, it is a fun time to be playing with 3D printers. For others, it might just be frustrating.

If you want to print something that someone else has designed and shared, there is more stuff out there every day. The vast majority are just gewgaws and gimcracks at this point: candlesticks to chess pieces to models of Doctor Who’s Tardis. But there are more and more practical pieces appearing all the time. All sorts of brackets, adapters and replacement parts are being added to online collections every day, and this is where I see the real future of this technology. For modding and repair, 3D printing is going to be a major-league game-changer.

Imagine that you get up in the morning, stumble bleary-eyed to the kitchen and start the coffee. You throw two slices of bread into the toaster, but much to your dismay, the plastic knob breaks off of the pop-up lever. Drat! But luckily, you have a 3D printer. You take a picture of the knob with your smartphone, pull up the file for a replacement from the web, and send it to the printer. By the time you are out of the shower, the new knob is printed, you snap it on, make your toast, and you are out the door, on time.

Crazy, right? But not that far away. Think about what this means. You don’t have to order a part and wait for it, or throw away a perfectly good toaster and buy another. You save money, and that appliance doesn’t end up in the landfill. Don’t own a 3D printer? Stop by the local copy shop and run one off over your lunch break. In the near future, 3D printing could have all kinds of implications for bringing about a new “repair” economy that creates lots of local jobs AND benefits the environment.

Of course, we aren’t there just yet. For now, super high-quality 3D printing is still in the realm industrial prototyping. However, desktop 3D printers are fun and learning to use them is a creative and educational hobby. School STEAM (Science, Technology, Engineering, Art and Math) programs are starting to bring in their first 3D printers for students to learn on. In the next 5 to 10 years, those students will go from printing Antman action figures to designing a whole new class of products made to be repaired, not thrown away.

Interested in 3D printing in your home or shop? Let me know! Stay tuned for upcoming reviews of printers and open source project files for you to try and use.