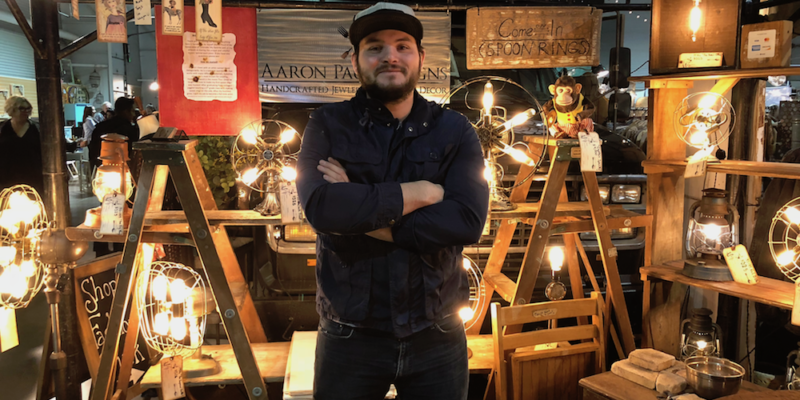 Master craftsman Aaron Paul has elevated the hobby of creating beautiful antique fan lighting fixtures. Not only that, Aaron makes sure that the historical narrative of said antique is included with each work of art whenever possible. He does this because he sees his work in a greater context, he wants people to know “they are buying a piece of history – some are 100 years old,” he says. He pines philosophically about his work and about the crafter who first brought life to the object to which he will provide a second life. He speaks in earnest and I am moved by his desire to infuse each piece with love in hopes of creating a ripple effect into the lives and homes of his customers.

I met Aaron at Rebel Junk Vintage Market in Loveland Colorado, where he was a vendor. Above all the other booths, it was his that drew me in. His work stood out against the backdrop of shabby chic chalk painted vanities, antique doors and locally crafted soap. I believe it was a combination of artistically staged hand crafted lighting complete with vintage light bulbs, sparkling sterling silver jewelry made from antique silverware and an indescribably unique vibe that seemed to act as a magnet to any passerby.

According to Aaron he took up crafting jewelry out of vintage cutlery when he was in college. He loves to make functional art out of antiques. As he began working the circuit of craft fairs and antique markets he realized better lighting was required to make his booth more appealing to potential buyers, but not just any lighting would do. Raised by a master electrician father, Aaron was not put off by the challenge of creating lighting out of an antique lantern. Apparently his customers were so impressed by his booth’s “light fixture” they began making offers and eventually Aaron succumbed to “an offer he couldn’t refuse.” The rest is “history” —pun intendend.

His first lamp, made from an antique lantern, took over 8 hours to construct. Today a similar project will take him approximately 3 hours, but he has spent over 18 hours on other more complicated lighting fixtures in the recent past.

Safety is Number One Priority

When I asked Aaron what advice he would give to someone constructing their first antique fan lamp he said “safety is of utmost importance. If you’re going to make a lamp, you must understand voltage and currents and electrical wiring.” You must also use Utility Licensed (UL) parts. He could not seem to stress this enough.

Aaron indicated that he always goes above and beyond minimal lamp building electrical safety standards when building antique fan lighting fixtures such as using extra electrical tape around sockets than is required by UL standards. After talking to Aaron I would suggest you spend some time learning about the ins and outs of safe electrical wiring before you try to DIY one. There is an abundance of lamp making resources available online such as Instructables nine lesson lamp making class complete with how-to videos and step-by step instructions.

With regard to lamp bases, Aaron prefers antique lanterns and electrical fans. The electrical fan was invented in the 1880’s by Schuyler Wheeler. Interesting historical fact I discovered whilst doing research: fan cages were originally made to protect the expensive fan blades and not your fingers, in fact the first electric fans did not have them. Wheeler was able to utilize the work developed by Thomas Edison and Nicola Tesla to create an electrical powered fan that turns. Fans with more than two blades were invented in 1896. The http://www.fancollectors.org/index.htm, is a great fan history resource complete with photo gallery.

Aaron’s antique fan lighting fixtures are a fascinating combination of practical beauty infused with love and his love of history. His sales pitch is not a sales pitch at all, but rather a lesson in history. His goal is not so much to sell his lamps (although, that would be nice) as it is to pass on an understanding and appreciation of the greater context of his unique creation (the fact that another gave it life with the inception of creativity and he gave it a second life). For Aaron this all leads back to the circle of life and an earnest desire to connect to the light within others.