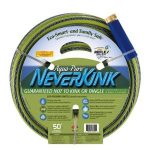 Somewhere in the back of your vault is a memory of being a kid in the dog days of summer, playing in the backyard and being so thirsty you’d even drink Crystal Pepsi if it was offered to you. So like most tykes your age, you walked up to the hose connected to your house, turned on the faucet and guzzled some water. That is until some evil genius of an older sibling snuck behind you and pinched the hose off, causing the water to suddenly disappear. And, like clockwork, as you peered into the nozzle wondering where the blessed hydration went, the aforementioned evil genius would unleash the hose, delivering a built-up burst of water up into your sinuses. Ah, that’s the good stuff! Well, sort of. You see most hoses made then, and some hoses made now, contain lead. And lead + drinking water really aren’t a great health combination.  For your own family, we’ve found a lead-free hose – ripe for drinking from – that comes with a lot of other perks too.

Apex’s AquaPure Neverkink Eco-Smart, Family-Safe Garden Hose has a lot going for it. As mentioned, it’s lead-free, which is great should you or your kids want to take a few sneaks of water when you’re tending to your lawn or garden.  It’s also produced with less material, making it roughly 8% lighter than similar hoses its size. On the eco front, the hose contains a removable flow restrictor that will prevent you from overdoing the pressure and unnecessarily waste water (but if you really need a strong flow, it’s easy to make that adjustment). But the aspect this hose is mainly known for is its “Neverkink” technology – a design feature that prevents the hose from knotting up, getting tangled in itself, and pinching (evil older siblings the world over shake their fists at that one).

Owners of the Apex’s AquaPure Neverkink Eco-Smart, Family-Safe Garden Hose have mainly agreed that the hose is free of kinks, although “Neverkink” isn’t always accurate; more like AlmostNeverKink or SeldomKink has been their experience. Hey, that’s a whole lot better than my current hose, the AlwaysKink. My hose is so kinky it’s likely been banned in Utah. So a hose that doesn’t kink very often is a big step up for yours truly and hopefully still good enough for you.