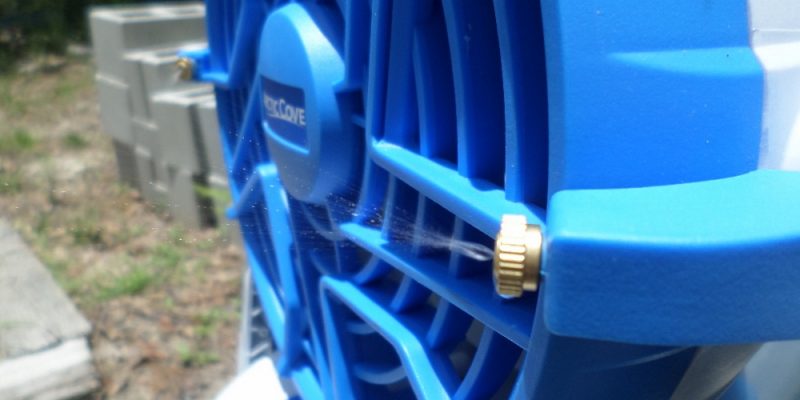 It’s not often that I get to say nice things about safety gear. From dorky hard hats to steamy-lensed safety glasses to blindingly bright safety vests – I’m not really a big fan of wearing these misery-inducing devices, but sometimes it’s better to miserable than be blinded, deafened, maimed or dead. One of the (literally) coolest tools on the job isn’t just about staying cool with misting fan technology. The Arctic Cove Bucket Top Mister could help save your life from heat illnesses too. Oh, and it could come in handy for situations that aren’t quite as life and death.

You Can Only Take Off Only so Many Clothes

One of the funniest things I ever heard a framer say to me was why he liked winter best: “You can only take off so many clothes when it’s hot and it’s still going to be hot.” He had a logic that made sense to me, especially down in the sub-tropical swampland of the Gulf Coast of Florida. Bring a machete to cut through the humidity and don’t forget the bug spray and the SPF 24-7. The sun is always shining and the bugs are always biting. Did I mention it gets hot here?

As I write this inside my 78 degree air conditioned office and look out the window at the mirage-like heat waves streaming off of the asphalt, I’m guessing it’s about 85 degrees outside, not bad for 9:30 in the morning. I was lucky enough to be inside today, but my mind wandered back to another day when I had the privilege of installing some asphalt shingles on a sunny roof. It was well over 90 degrees in the shade and I was feeling very aware of the effects of heat illness, and how to avoid getting one of the five forms of this sometimes fatal illness.

Mister, Can I Use the Bucket?

But what do all five of these illnesses have in common for prevention? Get into a cool, shady place, pour cool water on the victim’s skin and face and relax, exactly what the Arctic Cove Misting Fan provides. Keep in mind as brilliant as HomeFixated writers might be, we’re not doctors. If you suspect you or someone around you is experiencing a heat illness, seek out appropriate medical care, OK? But when you’re ready to cool off with the Arctic Cove Bucket Top Mister, simply attach this misting fan to the top of a plastic five gallon bucket found on nearly any jobsite, fill it with cool ice water and turn it on for instant relief from the heat.

Once I charged up the 18V battery pack on the provided 6-hour trickle charger (it’s also compatible with Ryobi One+ battery packs), I plugged in the battery and set it on top of a clean plastic bucket filled with water and a bit of crushed ice. Arctic Cove’s timing couldn’t have been better, they shipped us the Bucket Top Mister to evaluate just in time for the first long three day weekend of the summer. It spent its first 6-7 hours outdoors at a barbecue before it finally sputtered its last wisp of cool, atomized water. I did discover that if you get too close to it while you’re cooking on the barbecue, you end up with water running down your leg and guests think that maybe you get a little too excited when cooking meat.

Hose them Kids Down

The next day, it was the kids’ turn to enjoy the Arctic Cove Bucket Top Misting Fan as they played outdoors with their other water toys. It soon became apparent from the crowd of kids huddling around the Arctic Cove Misting Fan that it was just as big a hit with the kids as it was with the adults. It kept everybody nice and cool for the majority of the day and instead of using a five gallon bucket, we hooked it directly up to the garden hose and set it on the edge of the table. That helped to keep the kids away from the bucket and we found it also helped to save on precious battery power now that the pump didn’t need to take action. The only thing I don’t like about the Arctic Cove was that it didn’t have another battery pack because it died a few hours too soon for the kids. It lasted about 6 full hours with a hose, so you’re probably not going to use it for a full eight hour work day.

All in all, it’s definitely a tool that every hardworking man, woman or child can appreciate – unless they happen to live in the arctic circle. It’s built jobsite tough and will definitely be a part of my “tool crew” for years to come. At under a $100, it’s well-priced too. Grab a bucket, fill it with ice water and then head outdoors in the heat to get the job done safely and more comfortably. Enjoy the nice summer days and your Arctic Cove Bucket Top Mister Fan!