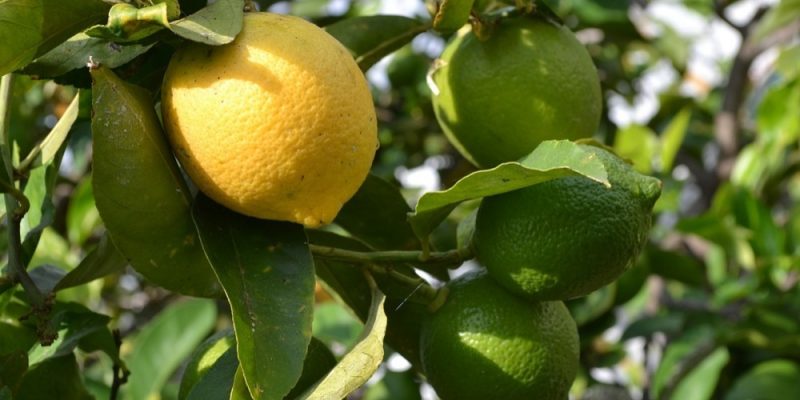 For the past four years, I have been attempting to grow key limes in hopes of eventually getting enough fruit to make a key lime pie. It has not been a very productive relationship so far. While I have had more thorn-related wounds than I care to count from dragging the tree indoors and back outdoors, there have been absolutely no limes. That’s a great start to an article on growing citrus in containers, right?!

I know it can take anywhere up to seven years for seed grown key lime trees to produce fruit so that’s just the way it goes. The problem is that all of the plant guides completely neglected to mention that the thorns on these trees are more like fangs than run-of-the-mill sticker bushes.

To add insult to injuries, I later found out that citrus trees comes in two varieties: those with thorns and those without. Needless to say, I advise everyone to get the painless alternative. Save yourself the bloody struggle.

Mine finally produced flowers about six months ago only to have a sudden burst of cold weather eliminate any hope of fruit. Have I mentioned recently how much I hate winter?

I had the same problem with the lemon tree, but it’s otherwise a powerhouse for fruit production. I douse it with sour milk, sprinkle it with granular fertilizer, and water it regularly during the summer months. That’s all it takes. In one year, I have had 2 crops averaging about 10 lemons each. Impatient gardeners take note. The lemon tree is the better deal.

Lemon trees, especially the Meyer types, are also generally more cold hardy than their fellow citrus plants. Once they flower, you should just water more regularly to encourage large lemons. Mine ended up being almost the size of grapefruits. The moral of this story is clear. When life gives you lemon trees rejoice, but when life gives you lime trees see if they take returns. (Well, not really, but you get my point.)

It’s a good idea to grow citrus trees in well-draining soil and in the biggest possible containers that can be found. Despite the large pots, they’ll still need pruning eventually. My lime tree has already been clipped to have one flat side so I can drag it in a somewhat safer fashion. After having several branches broken and a defoliating misadventure involving bugs, the lemon tree hasn’t required any assistance in the pruning department.

In fact, many places advocate getting trees with dwarf rootstock because otherwise root pruning is often needed. I have been experimenting with the technique on less expensive plants because it allows container grown specimens to stay both small and productive. If you have the money, I advise buying the best possible dwarf rootstock. Root pruning is a messy business. I emerged looking as if I’d gotten into a fight with a shrub and a bag of potting soil and lost badly.

If you’ve gotten citrus trees san thorns, (May I again highly suggest these?), two potential problems you might face are cold weather and spider mites. Most citrus varieties can’t handle temperatures below freezing, which is precisely why you want to grow them in containers if you live anywhere that hits freezing temps. The cold threshold varies with each plant and I drag mine in when the temperatures hit freezing. They may drop their leaves before this point, but they’re just among the members of the plant world who protest the onset of winter by defoliating themselves.

I’ve also noticed citrus trees seem to act like magnets for spider mites. These bugs announce their presence by leaving a spider web-like coating over trees and mottling foliage a silvery shade. Check for regular spiders first before spraying the webs though, because they’re beneficial rather than obnoxious like mites. But once you’ve got the culprit pegged as these bugs, break out the spray.

Horticultural soap or Castile soap sprays may also help, but can sometimes burn foliage. Another method is to blast the trees with heavy squirts of water from the hose. This works alright but only temporarily. I just go for the light organic spray. I’m sure it would be completely successful if the spider mites didn’t camp out in the hydrangea bushes and make sneak attacks once I’d decimated their confederates.

For the most part lemons and limes are great plants to add to your home garden, just remember to purchase ones without thorns and keep them out of the cold. You’ll be good to go! Have any citrus-growing tips of your own? Share them in the comments below.