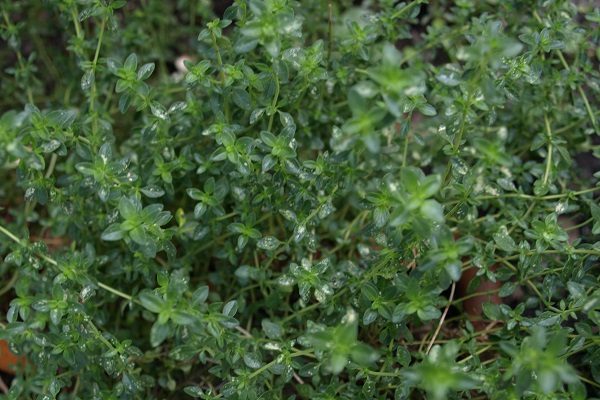 While I tend to do most of the cooking in my family, the guys are a tad over possessive of the grill. Think sharks with a freshly killed seal. The second reason I tend to let them run the show is because someone has to remain un-charred in order to be on hand to drive them to the emergency room. Given their propensity towards goofing around with the lighter fluid rather than calmly flipping over the hamburgers, that someone would be me. But while they’re busy playing with fire, I’ve been known to sneak various BBQ herbs and spices onto the charcoals to improve the flavor of their creations.

It doesn’t take a genius to realize that thyme is a good herb for grilling because it tastes great with just about everything. Thyme can be used when preparing fishes, meats, vegetables, soups… You get the idea. Just be sure to keep the rose thyme in an obvious and perhaps loudly colored pot so it doesn’t erroneously end up making an appearance at dinner. “Of course, there’s nothing odd in the roast beef. I don’t know why it taste like flowers!” Not that I would know anything about that, right?

Besides, the citronella content of some lemon thyme varieties is said to repel mosquitoes when crushed and applied to the skin. It might just be a good marketing scheme on the part of Richter’s Herbs. I can definitely envision someone up in Canada laughing at the thought of dumb Americans slathering themselves with lemon thyme, but they aren’t the only proponents of the theory. Since I spend the majority of every summer resembling an unripe strawberry: pink, white, and bumpy all over, lemon thyme it is.

Anyhow, thyme is among those Mediterranean plants that are incredibly easy to grow. These plants like a nice, cool drink now and again but too much water will kill them fairly quickly, so go for well-draining potting mixes. Top dressing these plants with horticultural or washed playground sand helps keep the water from pooling up and rotting the roots. They also are as fond of sun as Spring Breakers from the Northeast after the long rotten winter we had last year, the one we were convinced was never going to end.

Picture those lovely sunbaked islands in Greece that appear on innumerable calendars. These are places where water has to be shipped in. That’s thyme’s native habitat so grow accordingly. These are not English plants after all. No fog, soaking, or dimly lit conditions if you want them to succeed. (My various failed attempts to grow English lavender in the south Georgia climate can be summed up in a word: death.)

Rosemary is probably the most commonly known grilling herb and pretty much grows under the same conditions I mentioned when talking about thyme. This plant can be thrown onto the hot coals to smoke grilled foods. Some of the larger, woodier varieties can be also used as aromatic skewers and shish-kabob sticks. It’s the perfect use for that rosemary bush in your yard that desperately needs a trim. (I just wish I could convince people to plant it in their front yards rather than the ubiquitous and useless azalea bushes that Savannah natives seems to stick in every available crevice.)

Others BBQ Herbs and Spices & Tips for Using Them

Most herbs and spice pairings that taste good in the kitchen will likewise taste delicious on the grill. It’s a great idea to put bushy plants such as allspice wood, rosemary, sage, and lemon verbena on the coals to smoke and flavor meats. These flavorings can additionally be placed in a foil pouch among the coals so they last longer. Soaking herbs in water before putting them on the flames also helps reduce how fast they burn. But be careful not to use too much water or you might accidentally douse the fire that it took twenty matches and a whole can of lighter fluid to get going.

Laying tougher herbs directly on top of the grating and put the foods being grilled directly atop them also works wonders. Like rosemary, most woody herbs can also be used as skewers for various foods. But I’d definitely advise against using thin, twig-like pieces. After all, the objective is to eventually eat the steak, not feed it to the flames.

Lightweight herbs and spices are great in marinades. Grated ginger, thyme, tarragon, dill, fennel, savory and oregano are good choices here. They can also be sprinkled directly on top of meats and vegetables. Wrapping the herbs or spices of your choice in foil packages with your chosen food items is yet another way to infuse them with flavor. Of course, if you have an expired container of any herb or spice that you would otherwise have eaten, just toss it into the coals and let it smoke some flavor into your food because who know how long it’s been in the kitchen cabinet?

Really, there are so many herbs and spices it is impossible to name all the grilling possibilities in one article. So feel free to experiment and have fun. Just don’t set yourself on fire.