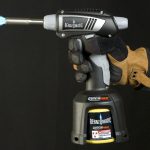 HomeFixated was the lucky recipient of one of the first Quickfire Torch production models, sent to us by Bernzomatic for review. We were pretty eager to review the new Quickfire, mainly because the review involves fire and a gun-like tool. Tools just don’t convey much more machismo than this. Another Bernzomatic torch (the TS4000), has also been a long time part of my tool box, so machismo aside, I was eager to see how they compared.

The Bernzomatic differentiates itself from the typical torch in several innovative ways. The most obvious difference is the gun style configuration, which results in a 40% height reduction for the rig. The Quickfire uses a squat gas cylinder (which according to Bernzomatic will solder about 200 joints). The cylinder also has a new quick connect design which lets you attach it with a simple 1/4 turn. The torch body itself looks a lot like your favorite cordless drill. I can just imagine someone putting their cordless drill and the Quickfire next to each other on their workbench and then spontaneously combusting the piece of wood they intended to drill. Of course, if you anticipate confusing your drill with the Quickfire, I’d recommend you don’t use either without close adult / sober supervision.

Not only is the Quickfire more compact and easy to handle, it also features an easy to access flame control. A simple twist of the knob on the back of the torch instantly adjusts the flame size for different applications. I like this setup, since you’re not having to stick your hand next to the flame exit and twist the nozzle. I probably don’t need to tell you this, but the flame automatically ignites with a full press of the trigger. In our testing, the lighting mechanism was extremely reliable. In fact, it fired up every time we pulled the trigger. 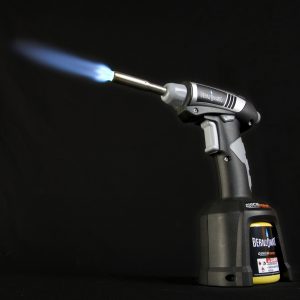 “But what if I don’t want to hold the trigger down all day?” you ask. Bernzomatic has you covered there too. There’s a trigger lock mechanism accessible from both sides of the tool. Just push it in while the trigger is depressed and then let go of the trigger, and you’ve got flame without finger cramping. The lock button is probably the least user-friendly part of the design. If you’re wearing gloves (as Bernzomatic recommends), and/or just have stubby fingers, you may find the lock mechanism finicky to engage. That’s probably by design to avoid accidental locking, however I would have liked to have seen a lock button a tad bigger, even if it had to be designed a little higher on the tool body.

The Quickfire claims a 30% faster soldering time, thanks to its “Ultra Swirl High Intensity Flame.” It turns out they base this claim on the same torch I already had, the TS4000, so I put them to the test heating two separate small pieces of copper until they were red hot. Both torches I used were burning MAPP gas, not propane. The TS4000 took 18 seconds, the new Quickfire took an impressive 8 seconds. My test was admittedly utterly unscientific, but it did convince me the Quickfire really is faster (over 50% faster in my mini test), and not just “Ultra Swirl” marketing hype. “Ultra Swirl” is also the least macho aspect of the tool. If you prefer something that sounds less like frozen yogurt, just call it “vicious vortex.” Bernzomatic marketing folks, no charge for that one.

So if, (the horror), you’re using an old torch you have to light manually, or even if you have the very respected TS4000 torch from Bernzomatic, I think the Quickfire is a great buy. It feels natural and easy to control in your hand, and it is definitely a lot more ergonomic than hanging on to a tank as you do with most other torches. If the efficiency claims hold up, the torch could pay for itself in time savings (unless of course you’re paid by the hour, in which case you may want to try soldering with your lighter).

If you’re not proficient with torches, check out the Bernzomatic Torch safety tips. The Bernzomatic Quickfire Torch (BZ9400) is available in most major home centers with a Manufacturer’s Suggested Retail Price of $69.99 and $7.47 MSRP for the gas cylinder. You can also get them in a kit together, model BZ9400QFKC.